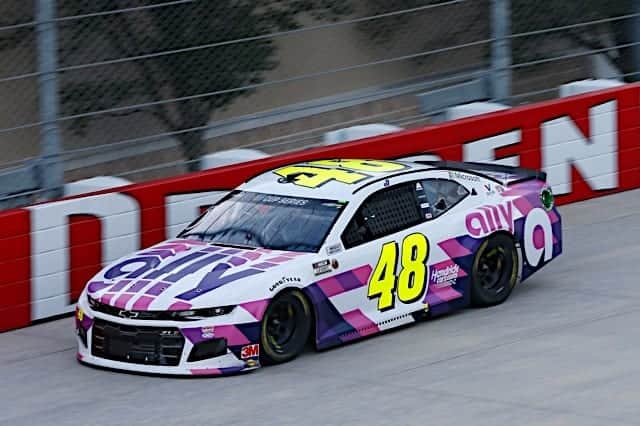 Jimmie Johnson has been the core of Hendrick Motorsports for so many years, at least since Jeff Gordon’s departure. But even before that, he could be considered better than Gordon was.

Throughout his struggles over the last few seasons, Hendrick Motorsports as a whole has not had a stellar run. But the last two weeks, that has seemed to change a bit. All four cars had speed this past weekend at Dover International Speedway, with Johnson leading the bunch with a third-place finish on Sunday (Aug. 23). He has seemed to find a groove as we near the playoffs.

How does a confident and successful Johnson contribute to the team as a whole? Does his success help the rest of the team do the same? What can we expect the rest of 2020?

Cole Custer has burst onto the scene this summer after scoring his first career win at Kentucky Speedway. Since then, he has been a very solid driver, scoring many respectable finishes. Finishes that were much, much better than the first half of his rookie season in the NASCAR Cup Series. Now, he leads the rookie points and will compete for a championship after his season looked bleak to start out, to say the least.

What has been the key to his consistent runs since his win? Is it all confidence and experience, or have his cars just improved that much? Where do you realistically see him finishing in the points this season?

Q: What effect does a confident and resurgent Jimmie Johnson have on the rest of Hendrick Motorsports? Eric L., Lansing, MI

A: If we are calling his last three races a resurgence, that’s fine. However, it is not a resurgence until he finds victory lane again, at least for a seven-time champion. But to answer the question, when Johnson runs well and has confidence in himself and his team, that is huge for the rest of HMS.

The first bit of that really showed this past Sunday at Dover. Johnson had arguably a top three-to-five car all day but never got the track position until late in that race. He would eventually wind up third. But his two teammates who had been struggling for a few weeks now both finished right behind him, with William Byron in fourth and Alex Bowman in fifth.

Many do not realize what his knowledge and experience can bring to a rather young driver core such Hendrick Motorsports has. He even brings a lot when he has his struggles, but it is so important for him to succeed with the young drivers on that team. Even though he will retiring at the end of the 2020 season, he is determined to make this final season a strong one for the entire team. Johnson is a team player, and he most of all loves to see his teammates succeed, and he has shown that in the past as well.

While Chase Elliott may be leading the charge for the team the last few seasons, including this one, he is still developing as a driver. Of course he is one of the best in Cup right now, but we know Johnson has helped him a ton along the way. Byron and Bowman both are in their third full seasons with the team and have always leaned on Johnson for advice.

When Johnson runs well, he brings so much to the table. Think back to when Hendrick was the dominant team in the sport several years ago. Johnson was unstoppable in that time period, winning five consecutive championships. He had Gordon as a mentor his entire career, one of the best of all time, while also having veterans in Dale Earnhardt Jr., Mark Martin and Kasey Kahne as teammates. After those drivers all left, Johnson was the lone ranger leftover from that time period. It was time for him to mentor the young drivers coming in with Byron, Bowman and Elliott.

The fact of the matter is that Johnson makes Hendrick a better team when he is having success. It is no secret he has been down the last three years, but I think we are seeing what he is starting to bring come playoff time. He will have to race his heart out at Daytona International Speedway this weekend for a playoff spot, and even that might not be enough to get him into this season’s playoffs. But, he is running like the Jimmie Johnson we all know. While he may not be winning just yet, he has strung together some really strong races. Elliott has had extremely fast cars recently, and Byron and Bowman seem to be picking up the pace just a bit too.

If Johnson can make the playoffs, do not be surprised at all if he makes some noise. Hendrick has seen this happen before with its teams. 2016 was a completely down year in the regular season for the team. Once the playoffs started, all four cars started running extremely well. Johnson went onto win his seventh title.

I’m not saying Johnson will win his eighth this year, but if he continues this string of success, HMS will be very strong down the stretch.

Q: What is the difference for Cole Custer’s success in the second half of the season so far compared to the first? Alex G., San Diego, CA

A: Custer has really been a strong contender for most improved from the beginning part of the season until now. He struggled to break into the top 20 in the beginning, but now, it seems like he is a strong eighth- to 12th-place car every single week.

The simple answer is Custer gained experience every race and learned the series. This is not like the old days when jumping from the NASCAR Xfinity Series to Cup was not as difficult as it was made out to be. You are going from one car to a completely different car these days, which makes it difficult for rookies to adjust sometimes. Xfinity and Cup cars used to be extremely similar with the Gen 4, so rookies usually burst onto the scene fairly quickly.

Nowadays, it takes maybe half of a season for some to really figure this stuff out. Custer is a perfect example of this. It seemed like he was not ready for the challenge for the first half of the year. After having a successful tenure in Xfinity, there was no doubt he was ready for Cup. All he needed was a confidence boost and more experience to prove he can do it. That Kentucky win was more important for him than people might realize.

Rookies aren’t supposed to win, and it’s not that common in Cup these days at all. For him to go out and make the move he did to win says something about his driving ability. While the cars are way different than Xfinity, he has a handle on Cup now. After that win, he has solidly been a top-10 contender every single week, scoring five top-10 finishes over the past 10 races.

Other rookies such as Tyler Reddick and Christopher Bell have also improved their performances since the start of the season, but it seems like Custer took that edge over the both of them recently. Barring a win by either Bell or Reddick at Daytona, Custer will also be the only one to make the playoffs, cruising to the Rookie of the Year award.

Now that Custer has more time in these cars, he is only going to get better. Now that we are visiting tracks for a second time, he may be a quiet contender in the playoffs. I would not say he is going to make a run for the title, but I can certainly see him making a run at the Round of 8. After all, he’s racing for Stewart-Haas Racing, a team that put all four of its cars into the third round just two seasons ago.

Year one has been a success for him, as he has proven himself at this level already in his rookie season. While his playoff run will be his first, it does not seem like he is affected by any pressure. And honestly, there shouldn’t be any on him. He was not even supposed to accomplish what he has so far this year at all. Anything more than what he has done already is just further proving his talent and skill behind the wheel.