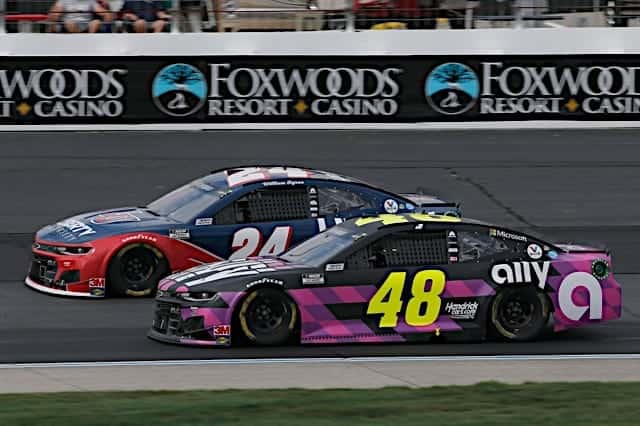 NASCAR’s regular season ends this Saturday night, Aug. 29, and while Kevin Harvick has already locked down the trophy — and 15 playoff points — for leading the points at that juncture, there’s still plenty on the line. And this year, instead of a tame intermediate track or even the racy Richmond Raceway, the race for all the marbles in terms of playoff spots is on the high banks of Daytona International Speedway, a track where the tiniest of mistakes can trigger an accident that ends the day’s hopes in a heartbeat.

There are a couple of playoff scenarios that could go down here. One is that someone completely off the radar pulls off a win and steals a spot. At this point, it’s unlikely, because while the superspeedways often give an underdog or two a great finish, they rarely give them a win. It’s happened (Justin Haley, we’re looking at you), but historically, it’s more likely that the winner will be a veteran in a top car.

Currently, there are five drivers eyeing three available spots based on points. A different winner would reduce those spots to two, but they would still be decided among this group. Here are the players and what they’ve got on their sides … or not.

The situation: Bowyer is clearly in the best position here. At 57 points above the cutline, he’d have to have a disastrous day to miss the playoffs. He misses being locked in by only a few points. Even a winner outside this group shouldn’t hurt his chances much, if at all.

What’s in his favor: Not only would Bowyer need a terrible finish, three drivers behind him would have to have spectacular ones to shut him out. He doesn’t have to have a great finish Saturday night to advance; he simply needs to finish and he’ll be fine. That’s a luxury the others don’t have. And history suggests he’ll probably finish. In 29 races at Daytona, he’s been running at the end 22 times, certainly not a bad number all things considered, and his average finish is one of the best among active drivers.

What’s working against him: Bowyer isn’t bad at Daytona, but he’s not one of the drivers you generally think of as a threat to win there, either. In 29 starts, he has no wins but 13 top 10s, a fair number considering the unpredictability of the track. A top 10 would be plenty to secure his spot this week, so his numbers suggest the outcome his team is hoping for.

The situation: Dover International Speedway was unkind to DiBenedetto, and what was once a solid cushion evaporated over the course of the doubleheader, leaving him just nine points above the cutoff.

What’s in his favor: Dibenedetto is certainly good at Daytona; he’s shown he can race with the best, even in underfunded equipment. Plus, he has both something to prove and plenty to gain from a top finish. And like Bowyer, he does control his destiny to a point. He doesn’t need to win; he needs to finish with more points than the three drivers behind him. A couple of strong early stages could separate him a bit more before the final run.

What’s working against him: As skilled as DiBenedetto has shown that he is at Daytona, his luck hasn’t matched it. What looked like competitive runs, even a possible win, evaporated in clouds of smoke. He’s in good cars and has very skilled more-or-less teammates in the Team Penske stable who can help him run up front, but he still lacks experience racing for wins in comparison to the two veterans here.

The situation: Right now, Byron is sitting on the bubble in the points battle, just four above a very fine cutline. But he’s there. He dropped briefly below the line after Saturday at Dover, but rebounded Sunday.

What’s in his favor: He’s got a seven-time champion crew chief on his pit box, to start. Chad Knaus can put out a fast car and call a winning strategy. Byron is also a Daytona 500 pole winner, so he knows how to be fast as well.

What’s working against him: Three things: One, Byron is the least experienced at Daytona in this group. In five starts, he has one top five but has only finished twice. Two, he has to be a bit more aggressive than either Bowyer or DiBenedetto need to be, because a win from somebody not in the top 16 currently could change the game. And running aggressively up front at Daytona puts him in the danger zone for one of Daytona’s multi-car crashes. Three, he has just a four-point gap on a veteran driver with seven titles and something to prove. That’s not a super enviable position to be in.

The situation: Four points below the cutline, Johnson wants nothing more than to be a part of the playoffs in his final full-time Cup season. And without a win in three years, he’s got more than a little something to prove as his final races loom.

What’s in his favor: The seven championship trophies on Johnson’s shelf didn’t get there by accident. He’s the best pure driver in this group; his numbers easily bear that out. Also, consider that he’s just four points out of this thing despite being out two races’ worth of points: he was disqualified after one of the Charlotte Motor Speedway races earlier this year, erasing a top-five finish, and he missed the Brickyard 400 after a positive COVID-19 test. That he’s that close despite those races might be more telling than that he’s outside the picture right now, and he’s so tenacious when there’s something in his sights that you can’t quite count him out.

What’s working against him: Daytona. Johnson has a pair of Daytona 500 wins as well as one victory in the summer race, but his last win was in 2013. Johnson is the best pure driver in this group, but he’s not the best at Daytona. At best, he’s an unpredictable superspeedway driver, with 11 Daytona DNFs to go with his wins. He’s not afraid to be aggressive, but he can cross the line in a hurry, and he cannot afford to do that Saturday. His best strategy this time might be to hang in the back as long as he can, but in doing so runs the risk of not being able to come far enough back to finish ahead of the drivers he needs to. Plus, he needs points.

The situation: Jones is a longshot. At 50 points out, he needs stage points, a top finish and for at least two of the drivers in front of him to have terrible finishes to points his way in. He’s not mathematically eliminated, and if this was any other track, that would merely be a formality, but it’s Daytona, and because of that, he has hope.

What’s in his favor: He’s one of two Daytona winners in this group, and he doesn’t really have to play it safe, because if he’s going to miss the playoffs either way, he can afford to miss them by racing where it’s most volatile more than the others can. And that could pay off if he can be ahead of the big ones.

What’s working against him: 50 points is a lot to overcome. If Byron finishes last without a single stage point, Jones would still need to finish in the top five with a lot of stage points to squeeze in. If he doesn’t score stage points, he has to win. Because not only does he have to gain 50 points on Byron, he needs to gain 45 on Johnson. That’s a crazy tall order with three or four races left, let alone one.