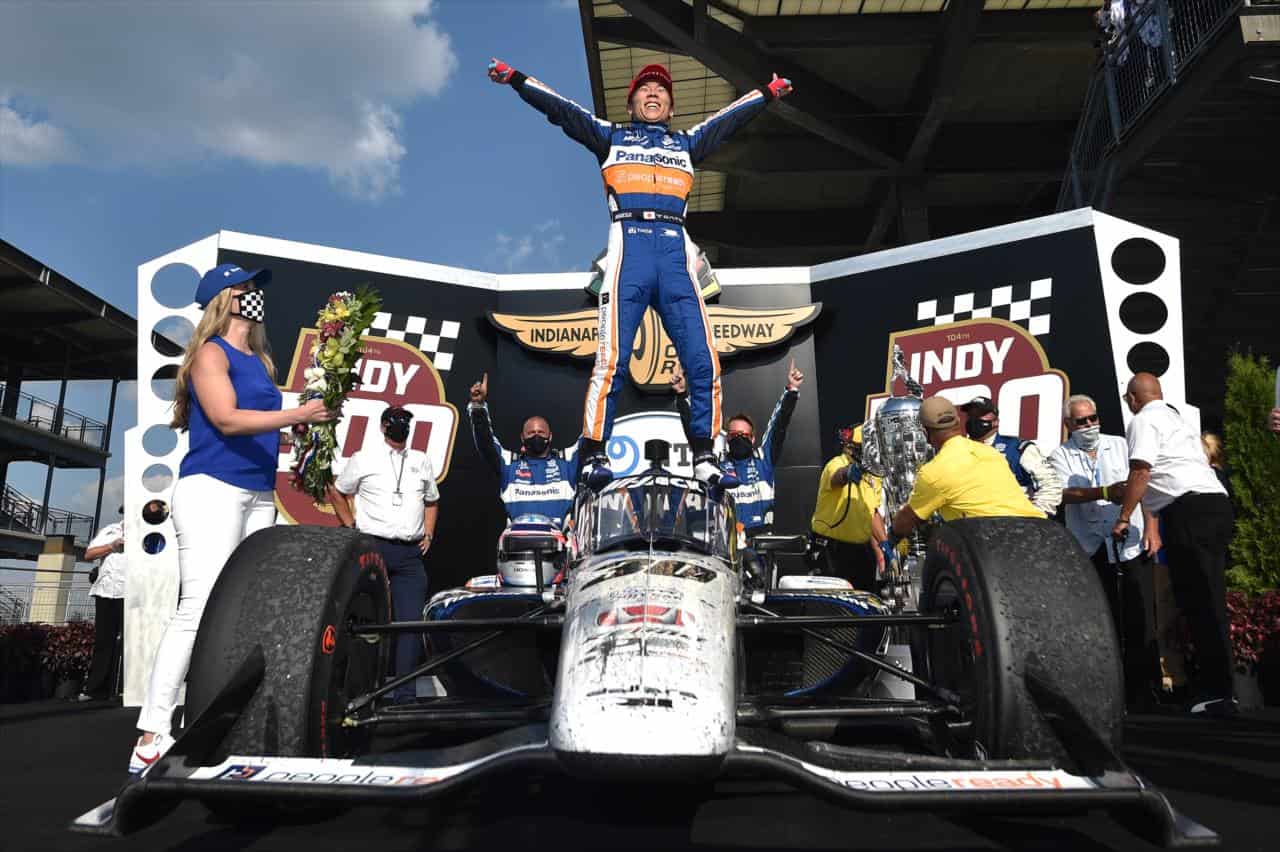 The Indianapolis 500 has always been a race that gets people talking. Whether it’s a late race pass, a crash or exciting action there may not be better “water cooler” talk than the buzz that follows the Indianapolis 500.

Sunday’s (Aug. 23) 104th running of the event was one of the more unique events in the races’ history as fans did not attend due to COVID-19 restrictions. Still, that didn’t affect the excitement of the race nor did it stop that “water cooler” talk from happening, although this topic may have been a different one.

In the closing stages of the event, 2017 Indianapolis 500 champion Takuma Sato led 2008 race winner Scott Dixon. On lap 196, Spencer Pigot crashed hard on the front straightaway after losing control of the car in turn four. Pigot’s car slammed the tire barrier at the end of the pit wall and bounced back onto the racetrack bringing out the race’s seventh caution flag.

The initial thought was that, due to the amount of cleanup from the accident, IndyCar would stop the race to ensure the fans saw a finish under green.

That conversation is the basis for our 2-Headed Monster this week as Clayton Caldwell and Adam Cheek debate what is the right way to end a race. Should a race end naturally under caution, or should the standard be that race control should do everything possible to ensure a green flag finish? Our writers debate.

Green Finish the Way to Go

The end of Sunday’s Indianapolis 500 was, put succinctly, a bit disappointing.

Throughout the final green flag run, Takuma Sato and Scott Dixon, two of the afternoon’s best drivers, looked to be settling up for a great battle. They had swapped the lead several times, with Sato pulling away by a small margin by the time the lap 196 caution flew. However, as has happened at Indy countless times, there was every possibility that Dixon or another car near the lead could contend as the laps wound down. Especially if the race had gone green for a four lap shootout.

Pigot, who lost control exiting turn four and slid backwards on the frontstretch, collided heavily with the pit wall attenuator and spun back into the outside wall. IndyCar, rather than red-flagging the event, kept the field under caution and completed the final four laps under yellow.

My internal racing fan – and many others’, I’m sure – is not a fan of ending races under caution. I completely understand why the 500 concluded under yellow, with the attenuator possibly taking an hour or more to repair, but it certainly leaves an empty feeling once the race is over.

Amid the cleanup, the race ended, and Sato secured his second Indy 500 victory. But there was just a bit of an empty feeling afterwards – no possibility of a battle to the finish.

I won’t lie, I turned to the Cup Series’ Dover race, and the 500 was already starting to slide towards the back of my mind. Of the past few years, the 2019 running is the one that’s stuck with me the most – Simon Pagenaud and Alexander Rossi’s battle for the lead and win as the laps waned is one of the greatest fights for the win that I’ve ever seen. Granted, that race had no violent crash that warranted a caution with just a few laps left, but the similarity is there.

Not to take anything away from Sato, either: He put himself in the right position, led a number of laps and was in the lead when the race ended. Perfectly played by the No. 30 team.

I realize that this argument could make me sound like a race fan who thinks he’s entitled to a finish no matter what, but it seemed to me that on Sunday, IndyCar had plenty of time to red-flag the race, clean up the accident scene and throw the green flag again. – Adam Cheek

And here it is. As soon as I saw the finish of the Indianapolis 500 on Sunday, I knew this topic was going to come up in some shape or form, and I knew that I was going to be in the minority of where I stood on it.

As I gazed through Twitter the last few nights, I was correct. People were mad. Mostly fans who wanted to see Scott Dixon pass Takuma Sato to take the victory. The rest of the world, I believe, has become engrained in a NASCAR world where gimmicks are much more commonplace than they were 15 or 20 years ago.

Sunday’s race at Indianapolis is a 500-mile event. We watched three and a half hours of racing prior to the caution coming out with four laps to go. Three and half hours, and yet because it didn’t end under green flag conditions, we think those three and a half hours don’t matter. The race is suddenly not a good race because we didn’t get an exciting finish.

I get it, Dixon had it in his head that he was going to wait until the last lap or two to make his move for the win, and he never got the opportunity to do it. However, you could argue that he should have taken the lead earlier than the final laps. In the end, waiting burned him. You can bet next year, in a similar opportunity, Dixon tries to go for the lead a bit earlier.

Sato had one of the fastest cars all day. He didn’t luck into a win. Let’s not take anything away from Sato and his team for having a super-fast car. The series was down there for two weeks, and Indianapolis is always a marathon. You have to do everything right to win the race.

So many things can happen over the course of a 500-mile race to derail your chances at victory. Look at Alexander Rossi, who had an extremely fast car but circumstances put him deep in the field late in the race and it eventually resulted in an accident. Sato and his team did what they had to do. They had a car that ran in the top three for most of the day, and in the end, Sato found himself in a perfect spot when the caution came out.

I get that luck is a part of racing. Always has been, always will be. You don’t win races in big league racing without a little luck. But what happened in the 490 miles prior to the end of a race should matter. There’s no doubt Sato got lucky, but capitalizing on that luck is key. The 490 miles they ran prior to the caution coming out is what gave them the opportunity to win, not the caution.

Sure, fans may have been stripped from an “exciting” or “drama-filled” finish. However, you know what they weren’t stripped from on Sunday? A legitimate race. A legitimate winner. IndyCar made the perfect call by not making a call at all. Let the race end naturally like it is supposed to. No gimmicks or ridiculousness at the end of races, what a refreshing concept! No gimmicks! Thank you for that, Mr. Penske! – Clayton Caldwell

Not red flagging the race was just plane wrong.4 laps on a 2.5 mile track is a lot of racing. If I had been a fan who traveled a long ways and spent a lot of money to watch the last 4 laps run under yellow I would have been more than unhappy. I know there were no fans at this race but in the future I would take this mistake into consideration when deciding whether to go to the race. Just so you know my wife and I have traveled more than 1000 miles to attend the 500. After this I don’t think I will again.

You paid for 200 laps and you got 200 laps. If there were 50 laps run under caution and the race ended under green would you feel cheated? The teams planned fuel for 200 laps. What if Sato ran out of fuel if they ran extra laps?

Bill B
Reply to  Lew

I get where you are coming from but instead of looking at this from what’s best for the customer think about what’s most fair to the competitors and which will result in the most deserving competitor getting the reward they deserve. My only problem with the GWC is that it allows too many competitors a last chance to STEAL a win that they didn’t deserve. The GWC is all about entertainment and not competition. In general I will always side with rules that favor the competition more than the entertainment.

your mother
Reply to  Lew

If there had been the GWC in the 90s I guarantee you Dale Earnhardt would have not won the Daytona 500 in 1998. I also doubt the vast majority of fans, especially those watching on television want to sit around for two hours for a race to get re-started with 4 laps to go. It’s sports, you watch the thing and move on with your life. If the winner of some event affects your life in any way the next day, you have a problem.

The cost of travel. race tickets and the jacked up hotel prices and the fact that the Indy 500 may not finish under green is the reason why i have never went to or will ever go to the Indy 500, For all the money we the fans pay is a green flag finish really asking for to much, I don’t think so

I stopped in at IMS on my way to an ASA race at I-70 Speedway in Missouri. I wouldn’t watch a race at IMS because you can’t see the whole track.

If the race was stopped after 150 laps because of rain would you expect one quarter of the ticket value back?

Red flag a race for cars that don’t have self starters? Not a great call. Have those engines, which have been running for three hours, sit and cool off for an hour or more, then start them up and run them full out? A really bad call. Watch three hours of racing and then sit for more than an hour to watch the last four laps? I think not. Indycar made the right call.