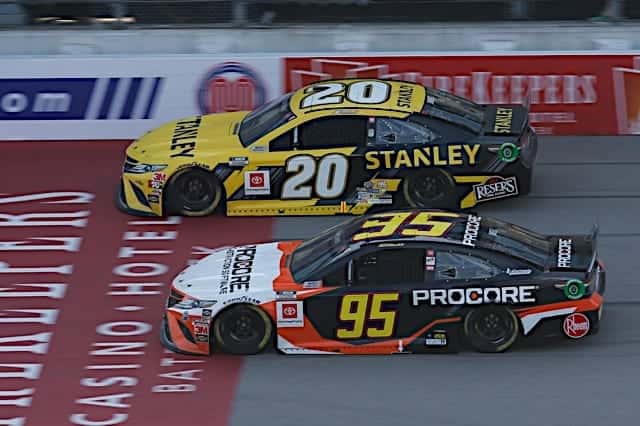 Could NASCAR teams refuse to race this week?

Over the past two days, all four major American professional sport organizations have been effected by largely player-led boycotts.

The strikes come off the heels of a Black man, Jacob Blake, being shot seven times in the back by police officers on Monday in Wisconsin. A combination of factors, including non-acknowledgement of the event by politicians and another shooting during protests that led to 17-year-old Kyle Rittenhouse being charged with murder, led to the Milwaukee Bucks refusing to play their scheduled NBA playoff game on Wednesday. That strike led to what will end up being a league-wide stoppage that will end in the coming days. MLB teams have followed suit, NFL teams have postponed practice, and the NHL has postponed playoff games.

While NASCAR could follow these other leagues’ lead, there are a few factors that lead me not to believe there will be a work stoppage.

Ultimately, however, the key reason for why a NASCAR strike doesn’t work is that motorsports are much more motor than they are sport. NASCAR is a business, part of an industry that has seen massive losses already as a result of the coronavirus. And unlike those other organizations, NASCAR is a private company, leading to teams taking the brunt of the costs to be competitive with a comparatively ridiculously small amount of the income the industry generates.

Even if a miracle cure were discovered for COVID-19 tomorrow and fans could come swarming back to the track ASAP, teams are still going to be in for a hard winter. With a recession, sponsorship is going to be hard to come by for teams next season. It wouldn’t be surprising if there are even more noncompetitive cars in Cup next season, with it being even worse in the smaller Xfinity Series.

Missing an event of any kind to protest racial injustice is a very brave action of any professional athlete, as they risk everything around which they have built their entire life. But at the same time, the Bucks didn’t also have to worry about going bankrupt as a business or an organization because of it. That’s not to demean what the Bucks did, it’s just the difference between NASCAR’s capitalist business model and the others’ at-heart socialistic business model.

Now, to be clear, if teams or even just drivers decide to sit out this weekend, it’s important that they be supported and actually listened to instead of being branded as lazy. What they would be doing would be incredibly brave, especially considering their entire sport may be at risk of folding in on itself.

Who’s in and who’s out of the NASCAR Cup playoffs?

The final race of the NASCAR Cup Series regular season will be held this weekend, with an interesting race within the race.

That leaves three positions left in the playoffs. Clint Bowyer needs just three points to clinch one of those three on points, or would clinch if there is an ineligible or repeat winner. He could also clinch if William Byron finishes lower than fourth in the first stage of the race. Matt DiBenedetto is in the playoffs by just nine points, with that number shrinking to five points if there is a new playoff eligible race winner.

Daytona is always a bit of a crapshoot. The defending race winner of this event is Justin Haley, if that isn’t apparent enough. As far as the battle to get into the playoffs, Johnson’s experience of racing under pressure will do him well against the younger Byron and DiBenedetto. But the No. 48 team really lost a lot of momentum being disqualified at Charlotte Motor Speedway back in May, and it has been a summer of bad luck ever since that event.

Could there be a surprise?

Outside of DiBenedetto, Byron and Johnson, Erik Jones is 50 points back of Byron and has a very outside chance of making it into the playoffs without winning, but would require both Byron and Johnson to fall out with a very strong finish by Jones to get in.

Quin Houff, Josh Bilicki, Brennan Poole, James Davison, Joey Gase, Brandan Gaughan, Timmy Hill, JJ Yeley and Ross Chastain are all ineligible for the playoffs, either via a part-time schedule or due to being too far outside the top 30, and would not be in if they were to win.

i think if there is a boycott, this will hurt na$car big time.

How made will you be when Jacob Blake is released from the hospital and sent directly to prison?

And Kyle Rittenhouse is ruled self-defense?

That would be the WORST CASE SCENARIO for the country, never mind the racist NASCAR fans.

Ah, yes. Those pesky, racist arrest warrants and due process.

I guess I missed the day in law school when they said that a arrest warrant was a license to shoot a guy in the back seven times.

Resisting arrest with a deadly weapon is tho. May have missed that day too I see. :)

Surely a few of those black victims weren’t truly victims. Surely a few of them were bad guys and resisting arrest. Yet they are all being treated like martyrs. As far as I am concerned, if a cop tells you to stop and you don’t, you deserve to be shot or tased or punched in the face or tackled or whatever it takes to get you to comply. For those that were truly innocent and victimized because they were black, those cops should be tried and jailed accordingly. For the rest, maybe they got what they deserved.

“Racist” has no meaning anymore. It’s a knee-jerk word used by minorities or those afflicted with white guilt, thrown around when someone doesn’t prostrate themselves at the altar of diversity. White manager didn’t hire the black guy? Doesn’t matter if he didn’t have the training. Racist. White dude with his arms full doesn’t hold a door for your black friend? Racist. It’s been diluted.

“A person may employ deadly force against another, if the person reasonably believes that force is necessary to protect a 3rd-person or one’s self from imminent death or great bodily harm.” Wisconsin Legislature: 939.49

In other words, the officer must REASONABLY believe his own life is in IMMINENT danger and there is no other way to protect himself. Mr. Blake was attempting to flee – not to harm the officer. Even if he had a knife in his possession, he was turned away from the officer and presented no IMMINENT threat to the officer.

I guess you missed the entire course, Jake!

Finley is certainly a little snowflake

If both things happen it would be great.

I for one think the major ball sports have shot themselves in foot big time. I for one will never again watch these overpaid idiots .

Athletes are entitled brats. Sitting out is not brave. Also, what makes their opinion more valuable than anyone elses?? Lebron James hasnt said a word about China, nor has anyone else in the NBA. These people get paid millions to play a game. Jacon Blake was a rapist who refused to cooperate with police. George Floyd had lethal level of fentanyl in his system. People die bybthe dozens from crime in liberal run cities across the country every week. Get real!! Report sports not your opinion.

Let’s see how serious bubba is about his platform and see if he sits out ?

There is little bravery in these boycotts. Would they do this if spectators were allowed at games?

Down the road, this backfires. The TV packages that drive the money in sports, whether cable or streaming, are out of the reach of many. People have been cutting cable in larger numbers each year. Some streaming services are in the same price trajectory as cable. When the TV money dries up, it trickles down to the salaries at some point. The legacy of this boycott will be lower salaries, adversely and disproportionally affecting the same people this so-called movement is alleged to speak for.

Let’s face it. An incident like this is going to happen again whether it’s next month, next year or two years from now. No matter how much training, cancel culture, defunding and the like takes place, officers are human and citizens are human. On very very rare occasions, the wrong circumstances come together with terrible results.

It appears Jacob Blake brought a knife to a gun fight.