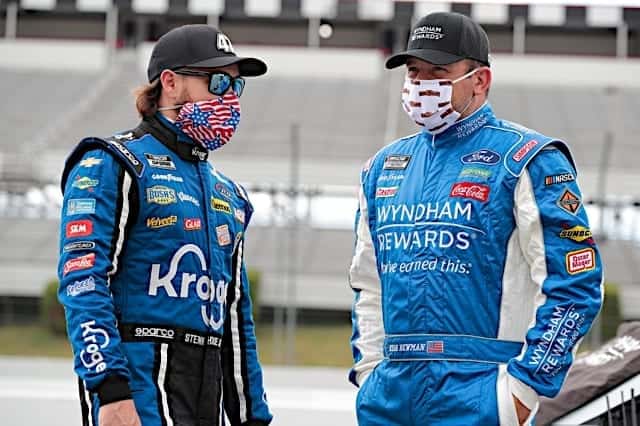 There has never been more on the line for back half of the NASCAR Cup Series field than there will be this Saturday night, Aug. 29, at Daytona International Speedway.

With the regular-season cutoff race taking place on a superspeedway for the first time ever, it gives teams with little-to-no shot at the playoffs an opportunity to throw a Hail Mary and go for a win to get in.

In the past, the cutoff race was always at either Richmond Raceway or Indianapolis Motor Speedway, both places where the best drivers with the best teams are going to win almost every single time.

But Daytona is the great equalizer. Justin Haley proved last year that anyone in any piece of equipment can win there. And if anyone from 17th-30th in points wins, they will bump out one of the 16 playoff drivers.

All this coincides with the what is setting up to be the wildest silly season we’ve ever seen. With multi-year deals going by the wayside for the most part, there is hardly the seat that is safe for 2021. There are several drivers who could secure their current seat with a win Saturday and others who could find themselves a better one with a dramatic victory.

Here are 10 drivers who could pull off the Daytona upset along with what they have to gain from doing so.

It is possible for Jones to point his way into the playoffs, but at 50 points out, it’s very unlikely. That leaves winning as almost his only option. Fortunately for him, Jones is no stranger to Daytona’s victory lane. He won the summer 2018 race there and the Clash earlier this year.

Given that he is losing his ride at Joe Gibbs Racing at the end of the year, a win and a spot in the playoffs would greatly raise Jones’ stock on the free agency market. And given his talent and the quality of his equipment, Jones has the potential to make a deep playoff run should he make it in. One win might be all he needs to burst open the flood gates and start a hot streak. Which of course would raise his stock even more in free agency.

At 23rd in points and 203 points below the playoff cutline, Stenhouse has to win to get in. But superspeedways are his bread and butter, as his two career Cup wins came at Daytona and Talladega Superspeedway. Plus, Stenhouse has already had superspeedway success in his first year with JTG Daugherty Racing. He won the pole for the Daytona 500 and finished second at Talladega by 0.007 seconds. Had the Talladega start/finish line been even farther into turn 1, Stenhouse would already be in the playoffs.

Stenhouse signed a multi-year deal with JTG before the season, so he’s one of the few drivers on this list who won’t be in play for silly season. But being in the playoffs would validate JTG’s choice to give him another opportunity in Cup. It would also give the team some momentum and would be the first time since 2014 that the No. 47 has been in the playoffs.

But most of all for Stenhouse, it would mean that he was in the playoffs and Roush Fenway Racing, the team who released him in favor of Chris Buescher, was not. And you can bet Stenhouse wants to stick it to Roush.

Roush as a whole is down this year, so a win by Newman or Buescher would be huge for the organization. But Buescher seems to be in it for the long haul with RFR. At 42 years old, winning a race and making it back to the playoffs could set the stage for Newman’s future. If he doesn’t make the playoffs and Roush continues to struggle, why would he want to continue with the team or even in NASCAR for too much longer? Winning Saturday night could prolong Newman’s Cup career a couple more seasons.

Not to mention, it would be an incredibly emotional moment if Newman won at the track that nearly claimed his life back in February. It would be the ultimate comeback, just like when Ernie Irvan conquered Michigan International Speedway after it almost killed him. Newman was roughly 100 yards from winning the Daytona 500 when Ryan Blaney turned him in February. He should already be in the playoffs, and a win Saturday night would go a long way toward righting where he was wronged.

Of McDowell’s 11 career top-10 finishes, nine have come in the state of Florida. All three of his top fives have been at superspeedways. What that means is that the Arizona native is a great superspeedway racer, and Daytona is his best track. Combine that with the fact that McDowell is having a career year — he is the highest in points (24th) he’s ever been at this point in a season and has the most top 10s (three) that he’s ever had in a season. The stage is set for him to finally have that breakthrough win.

It would be Front Row Motorsports’ third team win and first time in the playoffs since Buescher in 2016. But more importantly, it would mean job security for McDowell, who has only ever had one-year deals with FRM. Or maybe it catches the eye of a another team and he can score more money or a more competitive ride out of it.

Wallace is arguably the hottest free agent still available for next year. He’s made the most of his equipment at Richard Petty Motorsports, and he keeps on attracting new sponsors.

The one knock on Wallace on casual fans and people unfamiliar with NASCAR has been his lack of visible success at the Cup level. A win on Saturday night at NASCAR’s most famous track that would put a Black driver in the playoffs for the first time ever would transcend the sport. Then Wallace would really attract some sponsors and be the biggest free agent.

Nemechek has impressed in his rookie season considering FRM’s equipment level, and he’s finished in the top 11 in both superspeedway races this year. He certainly has the potential to get a surprise Daytona win. And that is what Nemechek needs if he is ever going to score a top-tier ride in Cup.

The second-generation driver was a hot prospect coming up through the ranks until he failed to win with the GMS Racing’s now-defunct Xfinity Series team. He’s done well for FRM standards, but if he doesn’t do something big, Nemechek might be stuck in mid-tier Cup equipment his whole career.

The 2003 Cup champion and future NASCAR Hall of Famer has nothing to prove. Kenseth could finish last every race the rest of this season and he’d still be considered a legend.

But if he were to go win Daytona Saturday night, then maybe the Kenseth of old awakens in the playoffs and he goes on a run. Many don’t think he’ll return next year, but maybe just one more win inspires him and Chip Ganassi Racing to come to an agreement for 2021 after all. We know how much Ganassi likes winners. That would take one more good ride off the market and makes things that much harder for drivers looking for one.

Kenseth is a two-time Daytona 500 champion and certainly can’t be counted out this Saturday.

LaJoie has three career Cup top 10s, and they’ve come in three of the past four superspeedway races. He recently announced he won’t return to Go FAS Racing in 2021 and is looking hard for a ride. A driver with nothing to lose can be a scary thing, and maybe a win at Daytona would be enough for Rick Hendrick to finally write him a letter back.

Richard Childress Racing and RPM, who leases equipment from Childress, have both improved since last year. Meanwhile, the results for Germain Racing, who also leases from RCR, are down. Dillon has less top 10s, is lower in points and has a lower average finish than in 2019. More so, any time brother Austin wins and makes the playoffs, it puts more pressure on Dillon to do well.

With Dillon now in his fourth season with Germain, it begs the question of how much longer will this duo stick together if there aren’t improvements. How much longer will Geico, who is now one of the four presenting sponsors of the Cup Series, stick with the No. 13? And if Dillon’s tenure with Germain comes to an end, does he retire from driving and take on a management role with the family team?

All of these questions would be silenced were Dillon to win at Daytona this Saturday night, and it’s entirely possible. Four of Dillon’s five career top 10s came at superspeedways, and the only top five of his career was in this race one year ago. It’s been 57 years since Johnny Rutherford won at Daytona in Smokey Yunick’s No. 13 for the number’s only win in Cup history, but Dillon can go for broke to snap that streak on Saturday.

The way rumors have been flying around about JTG’s No. 37, you’d think Preece had disappeared off the face of the earth. No plans have been announced by the team or Preece. If he wins Saturday and gets this car into the playoffs for the first time ever, then why wouldn’t the team bring him back next year?

Preece is not a bad driver. He’s just had one of the worst years a driver could ever have. A lot of his bad results aren’t even his fault. He’s still a two-time Xfinity winner and a Whelen Modified Tour champion. Of his three career Cup top 10s, two are at superspeedways, and his only top five was at Talladega spring of last year. If he could get to working well with JTG teammate Stenhouse, he could be in the mix on Saturday.

Three years ago, Preece bet on his career in an Xfinity race and brought home the trophy. It’ll all be on the line again this Saturday, and Preece has proved he can deliver under pressure. Don’t be surprise if Preece, the lowest driver in the standings with a shot to win and get in, pulls off the upset win.

A Matt DeBenedetto win might not shake up the playoffs since he’s currently in the top sixteen, but it would Likely mean either Johnson or Byron is eliminated. Matt runs well at super-speedways, and Wood Brothers Racing always has good cars at Daytona. My dark horse pick for Saturday night, but at Daytona, every driver has a shot.

My pick for win and in will be #95 Christopher Bell. I will bet that LFR will get some extra help from JGR for this race. Give him some playoff experience before he begins full time next year with them.