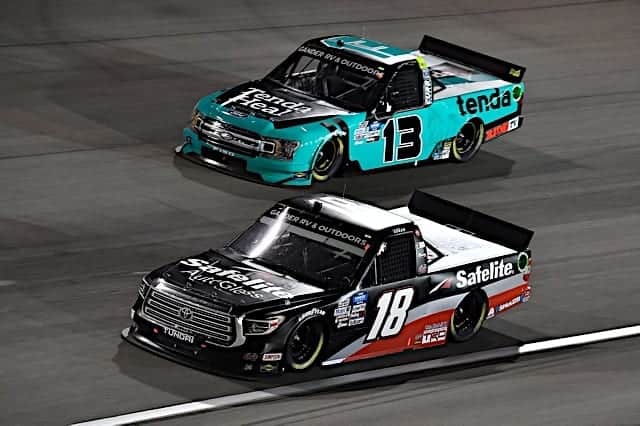 This Sunday (Aug. 30), the Gander RV & Outdoors Truck Series heads to World Wide Technology Raceway at Gateway for the third and final race in the Triple Truck Challenge. But more importantly, it’s just one of three races remaining to set the 2020 playoff field. Matt Crafton, Sheldon Creed, Grant Enfinger, Austin Hill and Zane Smith have all guaranteed their spots in the championship battle with a combined eight wins, but there are plenty of drivers who are winless this season that would love nothing more than to snag the $50,000 bonus and lock themselves into the playoffs with a win.

Perhaps the best driver who hasn’t won this season, Brett Moffitt has shown some speed but hasn’t been able to close the deal yet. The closest he’s gotten was a runner-up to teammate Creed at the Daytona road course a couple of weeks ago. The good news for the No. 23 team is that there’s almost zero chance for them to be knocked out of the playoffs, regardless of whether Moffitt can win.

In just two starts at Gateway, Moffitt has a 14th and a fifth-place finish, and with 18 laps led, he’s far from one of the strongest at the track. But with that said, the 2018 champion has five finishes inside the top six in the last six races, and he’s also led laps in the last seven straight races. If his team can find that little bit of extra speed to be out front when it counts, Moffitt can add another win to his name, and more importantly, a little more confidence heading into the playoffs in a few weeks.

I’ll keep saying it until it actually happens, but Christian Eckes is so close to finding his way to victory lane. It’s not like the No. 18 team lacks speed or talent behind the wheel. After all, he’s finished runner-up three times this season and has led the field in 10 of 13 races so far, including the last six straight.

When Eckes debuted in the Truck Series, running four races during the 2018 season, he impressed with three top 10s, but the one race he crashed out of was Gateway. Last season, he started on the pole and led 57 laps before settling for a 14th-place finish. But what that statistic doesn’t say is that he was charging toward the lead when he spun on the white flag laps last year.

I truly expected Johnny Sauter to win at Dover International Speedway last weekend. After all, he’d won the last three straight at the track and seemed to have it figured out. Instead, a sixth-place finish brought a positive for a driver who hadn’t finished inside the top 10 since the first of two races in the Kansas Speedway double header.

Sauter is actually almost as good at WWT too, though. In seven races, he’s never finished worse than fourth. And at this point, desperation has to be setting in for the No. 13 team with just three races remaining to set the playoff field. Though he’s only led 34 total career laps at Gateway and hasn’t been in front of the field there since 2016, look for Sauter to be around, fighting for the win that will save his season and his playoff hopes.

Don’t forget that Sauter also has something to prove since he hasn’t raced at Gateway since 2018, either. He was sidelined last season for a single race after a clash with Austin Hill the week prior.

Much like Sauter, Stewart Friesen is facing the desperation to just make the playoffs, even if the No. 52 team hasn’t shown much to convince anyone they can make a championship run this season. But with that said, Friesen has shown a glimmer of speed and the ability to contend with back-to-back top-10 finishes at the Daytona road course and Dover International Speedway last weekend. By comparison, he scored just three top 10s in the first nine races after the series returned from the COVID-19 hiatus.

Friesen has just two starts at Gateway and an average finish of eighth that doesn’t sound all that impressive. But last season, he started fourth, led 20 laps and ended up third. Obviously, third isn’t enough to give Friesen the win he needs to put him into the playoffs, but the notes from last season could prove valuable in the current age of no practice or qualifying.