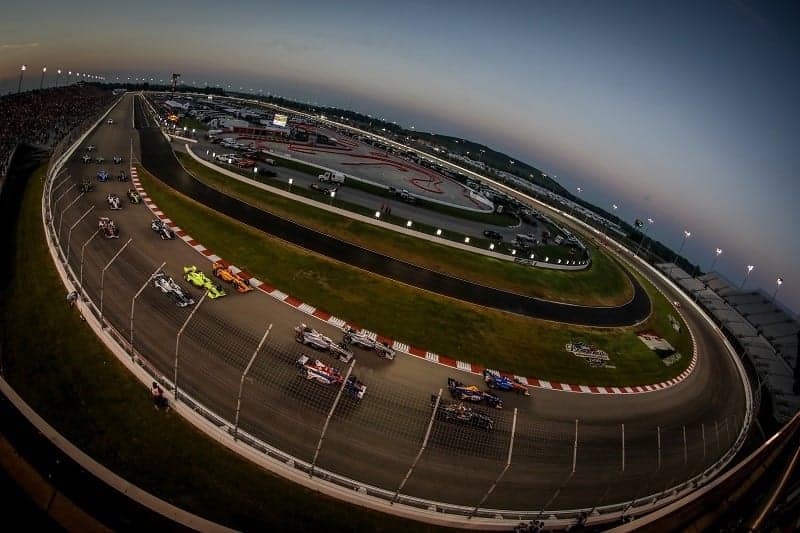 The field before the 2019 Bommarito Auto Group 500. (Photo Credit: Shawn Gritzmacher/Courtesy of IndyCar.)

The NTT IndyCar Series heads to Gateway this weekend for another doubleheader, starting with the 2020 Bommarito Automotive Group Race 1 on Saturday. Not only is it the first of two events but it’s also the first race on the calendar after the 2020 Indy 500 and the double points that went with it.

So what should fans expect from another single race turned two shootouts as the second half of the season, metaphorically, gets underway? Look closer at this weekend’s race in our 2020 Bommarito Automotive Group Race 1 preview.

How to watch: The race airs on NBCSN at 3:00 p.m. ET. Fans can also stream live timing and scoring through INDYCAR Race Control.

What happened in 2019: Team Penske’s Josef Newgarden looked poised to dominate the 2019 Bommarito Automotive Group 500 last year. Newgarden was able to capture the pole position (for the second race in a row), and had the fastest lap on the day. But the eventual champion wound up seventh; now two-time Indy 500 winner Takuma Sato won the race. He was joined on the podium by Ed Carpenter and Tony Kanaan, while rookie Santino Ferrucci actually led the most laps.

What to watch for in 2020: This is another event that IndyCar converted into a doubleheader in attempting to add more races to the 2020 IndyCar schedule. On track, that means what was the Bommarito Automotive Group 500 has now been split into two 200-lap events. The 2020 Bommarito Automotive Group 500 Race 1 takes place Saturday and then Race 2 at the same time Sunday.

But off track what will that mean for the teams and drivers? Doubleheaders are grueling enough, but the six-day turnaround after the 500 has always been a tough squeeze of its own, too. We see it every year going from Indy to the Dual in Detroit. Will there be the same wear and tear (and possibly attrition) at Gateway that we see on Belle Isle? Or how will this play out?

Drivers to watch: Much of NBCSN’s pre-race broadcast talk will be about Sato coming off his second Indy 500 victory. But that’s not the only reason to pay attention to him; since he’s last year’s winner, he comes in with the momentum in both senses of the word.

Before that, this was a Team Penske-controlled event. Will Power won in 2018 and Newgarden took the victory in 2017, the first year that Gateway returned to the schedule. With the organization not having the results they would have liked at Indianapolis Motor Speedway this could be a perfect rebound event for all of the Penske drivers.