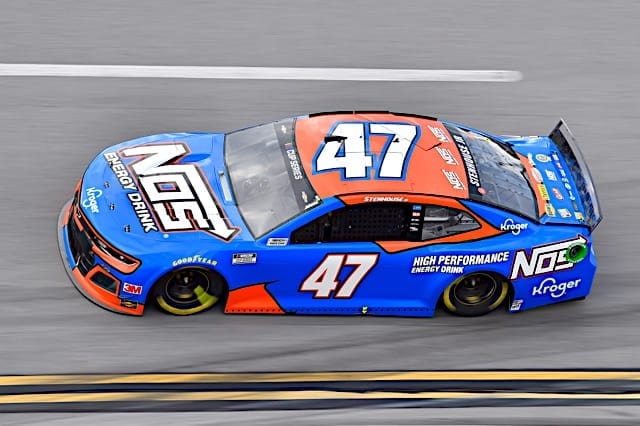 It all comes down to the final race of the NASCAR Cup Series regular season at Daytona International Speedway to set the playoff grid on Saturday (Aug. 29) night.

This is the first time that Daytona will cap the regular season, moved from its traditional July 4 weekend slot. Kevin Harvick clinched the regular-season championship last weekend at Dover International Speedway, but there are still a few things that can still unfold after 160 laps at Daytona.

Three drivers are looking for two spots based on points. Matt DiBenedetto, William Byron and Jimmie Johnson are on the bubble for the playoffs, all within nine points of each other. That could all change if someone outside the playoff cutoff wins Saturday.

Superspeedway racing has a lot of uncertainty attached to it. Last year’s race was a prime example when Justin Haley scored the win in a weather-shortened event. Haley only led one lap in the race, which coincided with the red flag and eventual conclusion of the contest. The top 20 finishers in last year’s race led a total of 14 laps out of the 127 laps ran.

The “Big One” can happen anywhere and anytime. Low-risk, high-reward drivers are the way to go for your picks this week. If you pick someone who starts deep in the field, you will lose less points than someone who starts up front if they wreck.

FanDuel has put more emphasis on finishing position than other DFS sites. That allows you to look at the entire field instead of just dominators and big movers.

Also, with only 0.1 points awarded for each lap led by a driver, the need for a dominator is less important when building a winning lineup. The 160-lap race will have a total of 16 points up for grabs in this category. Take note when building your roster and focus on mid-pack competitors who can climb up toward the front on race day.

Here are a few drivers to keep an eye on for Saturday night’s race.

One of the most aggressive drivers on superspeedways, Stenhouse will look for an opportunity to get in the playoffs with a win. In February, Stenhouse showed speed by winning the pole for the Daytona 500 and leading 24 laps. In 2017, Stenhouse won at Daytona under the lights to solidify his position in the postseason after winning earlier in the season at Talladega Superspeedway. The Mississippi native has led a lap in each of the last six Daytona races. While Stenhouse has not been great this season, he was only .007 seconds away from beating Ryan Blaney at Talladega two months ago. If Stenhouse is going to make the playoffs, he has to make bold yet smart moves. The No. 47 will roll off from the 31st position.

Hamlin has been hit or miss at Daytona. He has three Daytona 500s (all in the past five years) yet has not finished in the top 10 in the summer event since 2015. Hamlin has been dominant while leading in 21 of his 29 Daytona starts. The only things Hamlin has to avoid to tie Harvick with the most wins for the season (seven) are the big wrecks. Hamlin will look to close the playoff-point gap as Harvick has 42 and Hamlin has 37. Hamlin will start 10th on Saturday.

Harvick is dominating the 2020 season. Harvick’s average finishing position of 6.1 this season is the best for a full-time driver since Jeff Gordon in 1998, who clocked in with an average finish of 5.7. Through the first 25 races, Harvick has more top 10s than Jeff Gordon had in 1998, when he finished the year with 28. Harvick will have nothing to lose at Daytona and points to gain for the playoffs. In the two superspeedway races this season, the No. 4 car has a pair of top-10 efforts. Harvick will have the best view of the green flag as he lines up on the pole.

Dillon will look to not duplicate last year’s 400-mile race. Dillon led the most laps with 46 laps and was wrecked out of the lead before the storms hit. Despite not getting the results that he wanted, Dillon has performed at Daytona with seven top 10s in his career. Even though he missed the Daytona road course race, Dillon did not skip a beat with a top 10 and a top 15 last weekend at Dover. The 2018 Daytona 500 champion will look to capture his second win of 2020 from the 12th starting position.

How unpredictable is plate racing? LaJoie has scored five of his best finishes at Daytona or Talladega. The driver of the No. 32 Ford has put himself in position to finish well in the past two Daytona races. Even though Lajoie’s car was wrecked when hitting Ryan Newman‘s car in this year’s Daytona 500, he still walked away with an eighth-place finish. The Go Fas Racing entry is a perfect example of a low-risk, high-reward pick. Even though LaJoie might not run at the front on Saturday, he will look to avoid trouble by starting 25th.