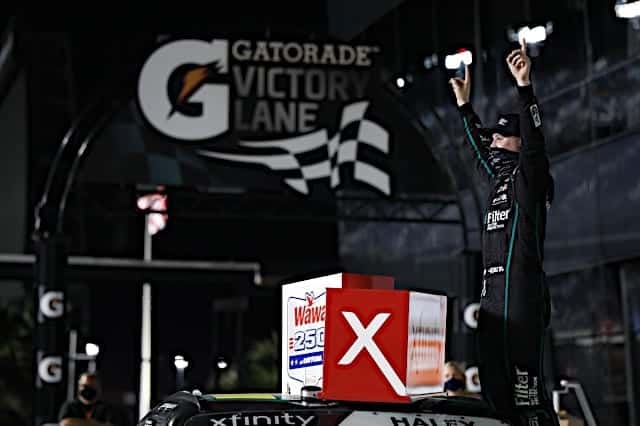 With one lap to go, Justin Haley sat content to watch his Kaulig Racing teammates fight for another NASCAR Xfinity Series win several cars ahead of him.

Before he knew it, his teammates and good friends AJ Allmendinger and Ross Chastain were crashing out of control and Haley was crossing the finish line as the unexpected victor of the Wawa 250 at Daytona International Speedway on Friday night (Aug. 28).

Allmendinger, who had led a race-high 58 laps, was turned by Chastain as they fought for the lead in the final corner. When third-place Michael Annett was collected by Allmendinger careening back up the track, the then-fourth place Haley narrowly avoided the melee.

On the final run to the flag, Gray Gaulding and Chase Briscoe were too far back to mount a serious charge, allowing Haley to capture his second win of the season.

“It was an amazing effort by Kaulig Racing,” Haley told NBC Sports. “Obviously I hate it that AJ and Ross got together there. We are both a team and a family, so we all work as one.”

Despite an interesting team meeting upcoming, a stunned Haley reflected on the crash that gave him the victory.

“It was a little bit of a delayed reaction by (Allmendinger),” Haley added. “It was obviously not intentional. I’m obviously praying for AJ to be okay as well as Ross.”

While the duo was indeed unhurt, a more blunt Chastain admitted he was going to try and win the event rather than help the part-time Allmendinger, which ultimately proved disastrous for both.

“I hate it, man,” Chastain said. “This is not going to help me, but it’s racing. But, it was a good night for Kaulig Racing inside and out.

“I mean, coming to the checkered, do you think I would have just finished second?”

Haley and Chastain did have the advantage of a thin field late in the going due to a plethora of advantages.

Even before the race, one contender was already at a disadvantage. NASCAR found an improperly mounted ballast on Riley Herbst‘s Toyota and was assessed several penalties for the infraction. Herbst’s car chief was ejected and incurred a pass-through penalty under green on lap one.

However, the No. 18 driver was quickly able to catch back up to the field when Joe Graf Jr. and Caesar Bacarella crashed early in the tri-oval. Graf was relegated to early retirement and finished last. Bacarella followed shortly after with another wreck of his own and finished 36th.

Brandon Jones goes around and a bunch of drivers behind him get collected. @NASCAR @XfinityRacing on NBCSN. pic.twitter.com/WfeWxnPNMw

The second Big One saw the damaged Allgaier blow a tire, which collected Brown, Snider, Joey Gase, Labbe and Jeremy Clements. The wreck prompted a red flag of 11 minutes and 23 seconds for track cleanup.

Behind Haley, Gaulding, and Briscoe, the top five was rounded out by Herbst and Harrison Burton. Chastain and Annett limped across the line sixth and seventh.

Austin Cindric, who was also involved in the last-lap wreck, was eighth. Both Josh Williams and Jesse Little lost the draft late in the going but capitalized on ninth- and 10th-place finishes.

The NASCAR Xfinity Series will return to action at Darlington Raceway for the SportClips Help a Hero 200 on Saturday, Sept. 5. The green flag is scheduled to drop at 12:30 p.m. ET with TV coverage provided by NBC.