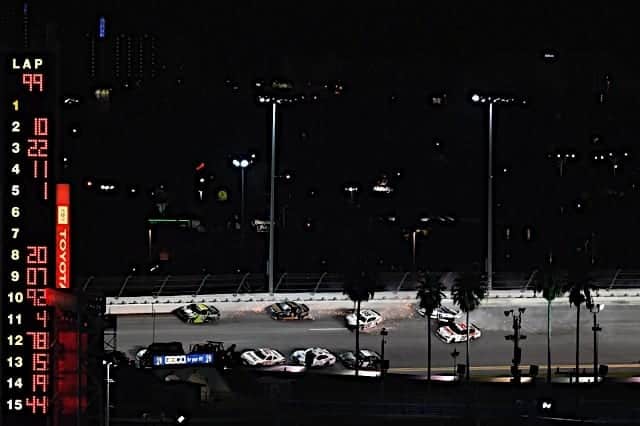 When the NASCAR Xfinity Series competes on a superspeedway track, Kaulig Racing is the team to beat. Case in point: Friday night’s (Aug. 28) Wawa 250 at Daytona International Speedway.

Based off the new qualifying equation that sets starting lineups, Kaulig drivers Ross Chastain started the race on the front row in second, with Justin Haley in ninth. Meanwhile, AJ Allmendinger was mired back in 34th, not having raced last weekend at Dover International Speedway.

But it wasn’t long until the Nos. 10 and 11 of Chastain and Haley were out front, with Haley winning the first stage and grabbing a playoff points and Chastain right behind in second. With a trio of cautions in the opening 30 laps, Allmendinger played pit strategy to lineup towards the front, beginning the second stage inside the top five.

From that point on, Kaulig dominated.

The trio of teammates got together and ran nose-to-tail for the bulk of the race. Allmendinger scored a stage win in a caution-filled middle stage, setting the team up to restart at the front for the final stage.

Due to early race calamity, nearly the entire final stage was run single-file against the wall with the trio of Kaulig cars pacing the field. But come the final lap, the gloves were off.

Going into Turn 3, Chastain got a run on race leader Allmendinger, maneuvering his Chevrolet to the inside. The No. 16 car went to block the No. 10, turning Allmendinger into the outside wall. Chastain crossed the finish line in sixth, with Allmendinger wrecked in 15th. Luckily for the team, Haley went from fourth to first on the final lap to score the victory, his second of the season.

After leading a race-high 58 laps, Allmendinger wasn’t happy after the race, but he wasn’t upset with his teammate, either.

“It’s the way is it,” Allmendinger told NBC Sports at the infield care center. “I try to take care of my teammates, but it is what it is. It’s for the win, Ross is going to the championship and he was going for the win there.

“I saw him go low and I thought he would maybe take care of me a little bit considering I was there. But he’s going for the win and it is what it is.”

Allmendinger admitted that if he was in Chastain’s position, he would have done the same thing.

“He’s got to go for the win, I get it,” he said. “I try to be smart, to take care of my teammates, especially at the superspeedways. … Ross is going for a championship and he’s pushing hard.”

According to Haley, there was a team meeting on Tuesday of this week as well as just prior to the race. The deal was that the teammates must take care of one another until there were 10 laps remaining in the race.

Because of that code, Chastain doesn’t believe he did anything wrong.

“That’s terrible to run into your teammate like that,” Chastain said. “It must be my fault though. It’s unfortunate, we did everything right all night. We’ve just got to win. I did everything right to be the best teammate I could, I haven’t always been. Last lap, I don’t back down and I’m going to go for it.

“It doesn’t matter how many races each of us run, we’re supposed to go for the win. … Coming to the checkered, what am I supposed to do, just finish second? Not this guy.”

Though it was an expensive corner for Kaulig, the team continued to show dominance on superspeedway tracks, having won three of the past four dating back to last summer at Daytona.

Chastain is the absolutely last teammate you would want to race on the last lap.. Allmendinger should get an Oscar for his post race performance. I wouldn’t hire Ross to drive a street stock. He would stuff his own Mother into the wall. Just a jerk.