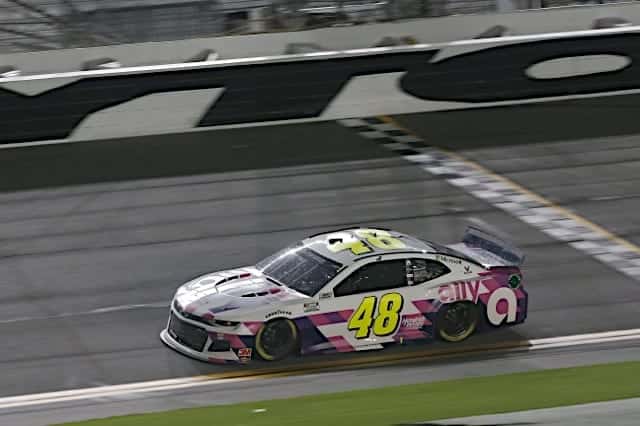 Last November, Jimmie Johnson declared 2020 his final full-time season in the NASCAR Cup Series. Unfortunately for the seven-time champion, it won’t end how many of his other seasons have.

During the first 25 races of the season, Johnson had shown speed, but had a handful of missed opportunities. When NASCAR returned from a 10-week shutdown due to the COVID-19 pandemic, the No. 48 wrecked out on the final lap of stage one while leading. One week later, he crossed the finish line in second, but was disqualified for failing post-race inspection, tallying zero points. Come July 4 weekend, Johnson tested positive for the coronavirus, forcing him to miss the Brickyard 400 at Indianapolis Motor Speedway.

Entering the regular-season finale at Daytona International Speedway on Saturday night (Aug. 29), Johnson trailed Hendrick Motorsports teammate William Byron by four points for the final playoff spot. Matt DiBenedetto was just nine ahead of the No. 48 team. It was time to lay it all on the line.

Through the opening two stages, Johnson showed race-winning speed, scoring the second-most stage points with 12. He beat out Byron and DiBenedetto, scoring four apiece. And in the final stage, it was setting up to be a straight up points battle between the three, lining up ninth, 10th and 11th on a late-race restart.

But with two laps to go, Johnson saw his shot at a record eighth championship evaporate when Denny Hamlin got into the rear of Joey Logano for the lead, who then made contact with Bubba Wallace. That led to an 11-car pileup, which included the No. 48 Chevrolet when Matt Kenseth came up the track and clipped Johnson’s left side door.

The Cliff Daniels led pit crew worked on the car, though Johnson was only able to limp around the track for a green-white-checkered finish. The No. 48 car crossed the finish line in 17th, missing the playoffs by six points.

“I really felt like we had a way to transfer, to win and point our way in with the way it went the first two stages,” Johnson said after congratulating Byron, who went on to win his first Cup race. “Things just got ugly down in Turn 1. It’s unfortunate, but that’s [superspeedway] racing.”

Though frustrated to miss the postseason for a second consecutive season, Johnson takes solace believing he had a car that could have won the race, had the cards fallen his way.

“We had a really good car,” Johnson added. “The last couple months we’ve been really getting our act together and running well. Definitely disappointed to not be in the playoffs, that was the number one goal to start the year. But I look back at the disqualification at Charlotte and missing the Brickyard 400 due to my COVID-19 positive test, and only miss it by six points. There’s a lot of – not going to dwell on it.

“We did all that we could this year, I’m so thankful for Hendrick Motorsports and the career that I’ve had. … There’s 10 races left, 10 trophies to go chase and we’ll have to focus our efforts there.”

Surely two goose eggs in the points column through the opening 26 races of the season played a factor in Johnson missing the postseason. Now, he’s focused on ending his full-time career with a bang, having nothing to lose.

Johnson said, “I think we can show that to close out the year. … I’m not going to dwell on this too much. I don’t know what I could have done differently.”

The series heads to Darlington next weekend, a track where Johnson has a trio of trophies from.

Could JJ sue the medical company and NASCAR who issued a false positive test for Covid-19. They were negligence in there work and cost JJ a NASCAR CUP SERIES PLAYOFF SPOT.

He’s not as disappointed as the network who still has to over-saturate the 48 coverage even though he is not in the chase.