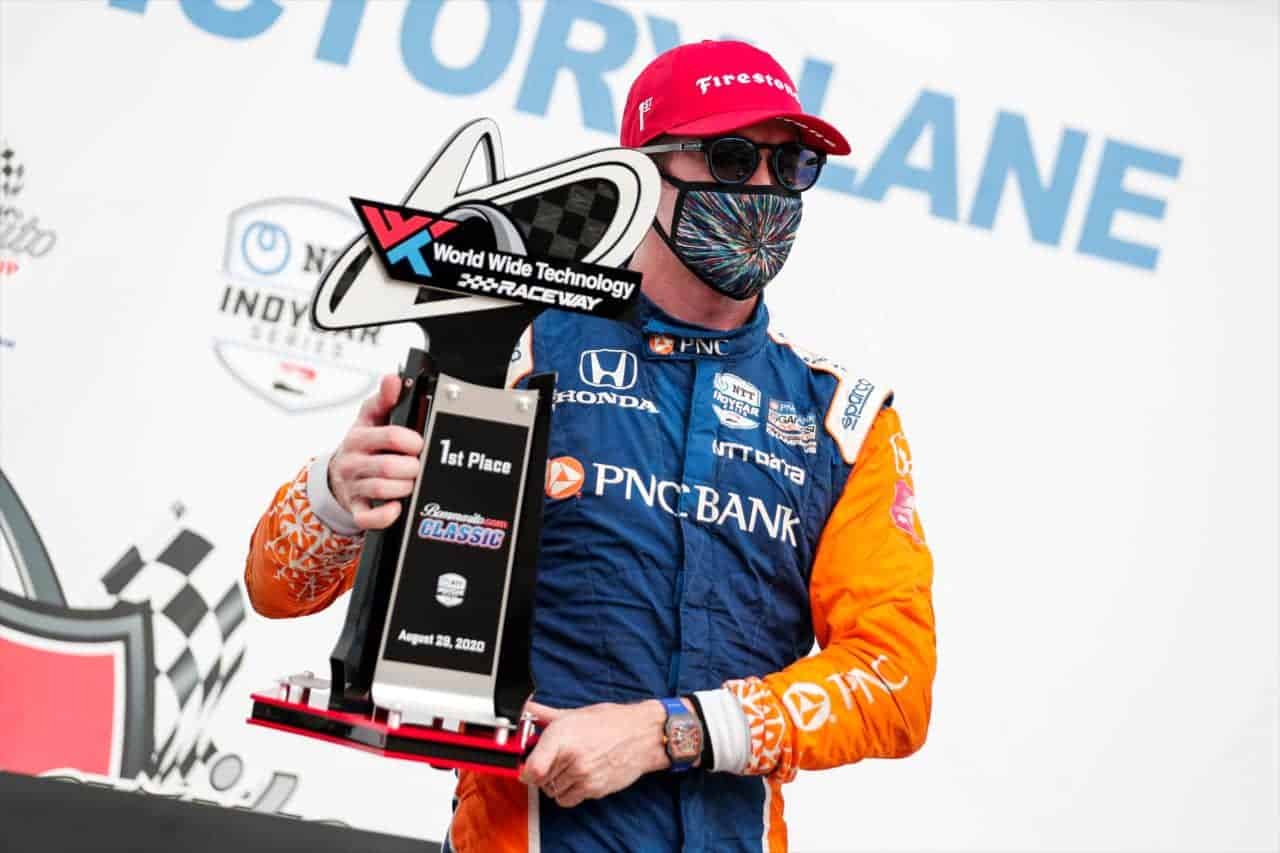 Scott Dixon officially scored his 50th win and 50% of all races in the 2020 NTT IndyCar Series after his victory at the first race of the Bommarito Auto Group doubleheader weekend at Worldwide Technology Raceway at Gateway on Saturday (Aug. 29). While nothing can exactly make up for another Indy 500 loss, Dixon can at least take comfort knowing that he maintains the lead of the championship and was able to hold off Indy 500 winner Takuma Sato in second. There has been a different winner at every IndyCar race at Gateway; Dixon becomes the 11th.

“Superb race all day. Sato was coming strong at the end,” Dixon said after the race. “I didn’t realize how strong – we were going into reserve mode. Last week at Indianapolis was a bit of a bummer. It’s nice to get a win. 50. That sounds awesome.”

Will Power led the field to the green flag after just barely out-qualifying Patricio O’Ward. Just as the flag flew, several cars jumped out of line. Near the rear of the grid, Alex Palou jumped out of line with Simon Pagenaud following. Contact was made with Alexander Rossi, Zach Veach, Marco Andretti, Oliver Askew, Ed Carpenter, and Tony Kanaan all getting caught up in some regard. Kanaan did manage to escape without much damage, and Palou was given a penalty.

“I’m not laying blame. It’s very reminiscent of a Michigan iRace, though, at the beginning of the year,” Rossi said after the crash.

Full course caution after a crash at the start of Lap 1.

The green flag officially flew on lap 13. Dixon slipped low down the track, and Jack Harvey was able to make up several spots. Ryan Hunter-Reay touched the curb and nearly lost control, losing positions to several other drivers. Graham Rahal pitted on lap 49 with a power unit problem that put him 11 laps down. Power, O’Ward and Dixon settled comfortably into the top three.

The first round of pit stops started around lap 62, with Power being the first of the leaders to come in while Dixon stayed out to pick up a gap in clean air.

Pagenaud, his car desperately wounded, was black flagged before the halfway mark after a pit stop didn’t solve any of his problems. Rahal ran just enough laps to pass Pagenaud in the standings before then retiring.

After the pit strategy filtered out, O’Ward led Dixon and Power. The Arrow McLaren SP team has its pit stops down to a science, as evidenced by O’Ward’s ability to pass several cars during each stop at the Indy 500.

Pato comes down pit lane for the first time today! ?

The No. 5 car is back on track ahead of Will Power.@ArrowGlobal // @McLarenF1 // #INDYCAR pic.twitter.com/LUoLQwl5YF

Power pitted just after the halfway mark, on lap 103, and led several other drivers in. A caution flew on lap 109 due to rain in the area. O’Ward and Dixon sat out from the pit stops, knowing the race could be legitimately ended after the halfway point. Rahal came back out after the yellow flew.

However, race control decided that the race would not be red flagged with the assumption that the weather would be nothing more than a brief shower and not a formidable storm. All those who had yet to pit coming in under yellow.

The race off pit road.@PatricioOWard beats @ScottDixon9 to the line! Past halfway at @WWTRaceway. #INDYCAR pic.twitter.com/1RTtH8V4E1

The race restarted on lap 121 with O’Ward leading the field to green. Several drivers slipped on the damp asphalt, but all of the drivers were able to save it.

Drivers started the final round of pit stops around lap 150, with most of the leaders staying out in an attempt to avoid the detrimental impact of any late race cautions. Santino Ferrucci had a problem with his right front tire, dropping him from a top-five position back to 17th. Marcus Ericsson, who had been running in third, nearly had contact with Colton Herta while blending back onto the track.

The leaders pitted about 10 laps later. The McLaren team of O’Ward had a slightly slower stop, with Scott Dixon coming out of the pits ahead of the rookie and assuming the lead. Despite a slow stop, Sato came back onto the track in third. Had his stop not been marred by a slow tire change, he could have had a chance to contest for the lead.

Sato almost immediately blew past O’Ward in an incredibly clean outside pass. He started chopping down time on Dixon, the race echoing the finish of the Indy 500 the previous weekend. This time, Sato wasn’t able to make the pass. Dixon put on a clinic of how to work dirty air behind Ferrucci while also working the air behind him.

“That was a textbook Scott Dixon race today. Steady, one at a time, here, there, nothing fancy,” team owner Chip Ganassi said of the finish.

Despite his loss of the win, Sato sounded happy.

“I think obviously we did a great job,” Sato said. “We lost some pace at the beginning of the race. I wasn’t entirely comfortable in the car. We fought strong and progressed on Ganassi and Dixon. The team car was phenomenal.”

About the faulty pit stop, he said, “It sometimes happens in the race. I make a mistake, or there’s a mechanical failure sometimes. The pit stop was frustrating, and we were frustrating, but the boys did a good job two weeks in a row.”

“I don’t know what these guys do!” O’Ward exclaimed about his veteran competition. “Dixon wrecked us in the pits, but I didn’t expect Sato to be coming up behind us.”

O’Ward finished in third, with Herta and Ericsson rounding out the top five.

Some of the best Indy Car racing for the past seven years. Anybody could win. The teams are all competitive.