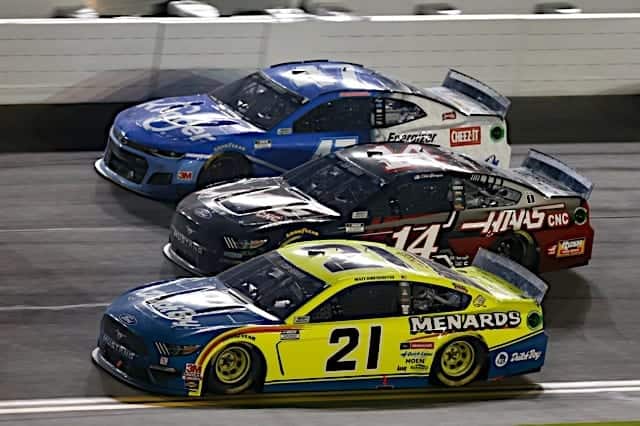 With 10 races remaining in the 2020 NASCAR Cup Series regular season, there was almost no chance Matt DiBenedetto, ranked 12th in points, could miss the playoffs. But entering Saturday night’s regular-season finale, it was a real possibility.

With consecutive victories by Cole Custer and Austin Dillon in mid-July at Kentucky Speedway and Texas Motor Speedway, teams then had to then be 14th in the point standings to clinch a spot into the postseason. After a 17th-place finish at TMS, DiBenedetto was still 12th.

But over the next seven races, the No. 21 team scored just a pair of top-10 efforts at New Hampshire Motor Speedway and the second race of the doubleheader weekend at Michigan International Speedway. Outside of those two finishes, DiBenedetto didn’t have a finish better than 15th.

Because of that, DiBenedetto entered the last race of the regular season just nine points above 17th in the championship standings, losing 34 points on the cutline in two races at Dover International Speedway last weekend.

The nervousness of the week came and went for DiBenedetto, beginning Saturday’s race in 15th position. In the opening stage, the No. 21 car lost out on stage points, placing 13th while both Jimmie Johnson and William Byron – his closest competitors – finished inside the top 10, scoring valuable stage points.

In the second stage, DiBenedetto found his rhythm, finishing seventh, gaining back the exact amount of points he lost to Byron in the first stage. Meanwhile, Johnson finished fifth, scoring six stage points.

Heading into the final stage, DiBenedetto was just one point ahead of the No. 48 car.

Over the final 60 laps, DiBenedetto raced up and down the scoring pylon. But when a caution flew for the first Big One with nine laps remaining in the scheduled distance of the race, all three of the bubble drivers evaded contact, coming out ninth, 10th and 11th.

Then there was a restart with five laps to go, but with two laps remaining, chaos ensued in Turn 1 with an 11-car pileup, collecting Johnson. Now, DiBenedetto just needed to finish and hope there wasn’t a new winner.

Come the checkered flag, Byron clinched his spot by winning and a 12th-place finish for DiBenedetto was good enough by six points to get him into the postseason for the first time in his career.

“It was too eventful,” DiBenedetto told NBC Sports post-race. “I’m mentally worn out. I’m gonna sleep great tonight, but there was so much going on there at the end. … This means so much to get this for [the Wood Brothers], but in the race there if I could I hedged toward being on the bottom because, man, just when you’re in the bottom and the top it’s nearly a sure thing when you get that you get crashed, so I’m glad we were able to take it home because I wasn’t happy with the finish. But I came in here saying all that mattered I just wanted to make these playoffs and the finishing position didn’t matter too much.”

Over the course of his Cup career, DiBenedetto has gone from racing for 30th position with BK Racing to spending two years with Go Fas Racing, only to bet on himself and leave that ride. Luckily for him, Kasey Kahne had to retire due to health issues, opening up the No. 95 car at Leavine Family Racing.

In 2019, the California native had a career season, nearly winning the Bristol Night Race after it was announced two days prior he wouldn’t be returning to LFR in 2020. Then Paul Menard retired, and he called on DiBenedetto to be his replacement driver for the famed No. 21 car.

This season has been filled with its ups and downs for the No. 21 car, having just a pair of top-five efforts with five additional top 10s. But it’s the journey that got him to the postseason.

“This is really special to make it in the playoffs,” DiBenedetto said. “My career has been one I had to fight, claw, scratch for everything and it makes me so appreciative. I say the little things, but this is a big one making the playoffs for the Wood Brothers. This is very big, really special and I’m glad we’ll be able to get to work and do the best we can the rest of the season and we have a lot of really good tracks and short tracks coming.”

Good tracks, indeed. The playoffs begin next weekend at Darlington Raceway where DiBenedetto has two top-10 finishes in the last three races at the track before going to Richmond Raceway, where he’s overachieved with underfunded teams in the past. Then the Round of 16 concludes by revisiting Bristol Motor Speedway, his best track on the circuit.

Nice job last night Matt, it looked like at the end you were just trying to survive knowing that would get you in and it was still crazy around you. Good luck in the playoffs.

Was hoping for a big season for Matt but he is making it easy for Penske to use its influence to create a spot for Cindric.