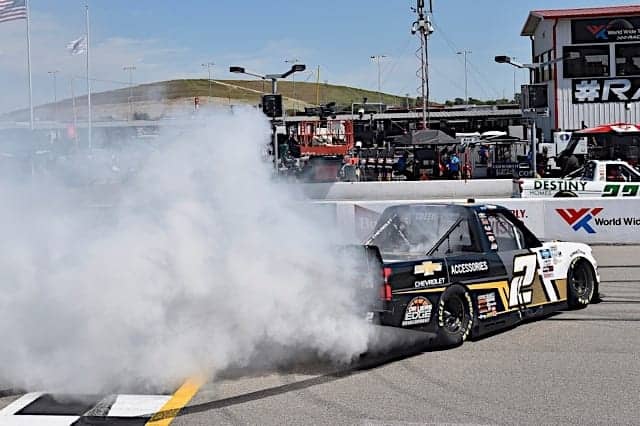 Todd Gilliland was among the drivers that dominated the first two stages of Sunday’s (Aug. 30) NASCAR Gander RV & Outdoors Truck Series CarShield 200 presented by CK Power at World Wide Technology Raceway at Gateway. But as a result of contact early in the third stage with Sheldon Creed, Gilliland was not around to contend for the win.

Instead, Creed retained the position and went on to earn his third victory of 2020, capitalizing on his lead on a restart with 13 laps to go ahead of Sam Mayer. Creed’s other GMS Racing teammate, Brett Moffitt, finished second behind Creed for the second time in three races, and it was also Moffitt’s third top-three finish in a row.

Contact at the front of the field! @sheldoncreed gets into @ToddGilliland_ which sends the No. 38 into the wall. pic.twitter.com/rr26ZuBDuD

“I want to start by apologizing to the 38 [Gilliland],” Creed said. “It’s so hard to pass here. I got the opportunity to get to his inside, I was just really loose getting in, he was pretty loose getting to my door. They were having such a good day. Me and Todd are buddies, I hate to do that to him.”

Gilliland won the first two stages of the race and finished 22nd, leading all drivers with 76 laps led.

“He just drove in there over his head and got us. That’s racing. I just hate it,” Gilliland said. “These guys work hard day and night for me. We had such a good truck. To win both stages, it was such a good day, it’s been one of the more dominant trucks we’ve had.”

Gilliland wasn’t the only early frontrunner to see chances of a win unravel in the final stage. Christian Eckes, who ran in the top five in the first two stages, saw damage from contact with Mayer contribute to his day ending early.

“That wasn’t the reason why we broke, but I’m sure it didn’t help matters,” Eckes said. “We ended up breaking a driveshaft. As a whole, I wish we could finish a race … we’ll move on to Darlington and Richmond and hopefully get a win.”

Why you always gotta do me like this @WWTRaceway. Had a fast @Safelite Tundra, contended for win all day, broke a driveshaft with 30 to go. Oh well, onto Darlington.

Austin Hill finished third ahead of Mayer and Stewart Friesen. It was Mayer’s best career Truck Series finish, one day after finishing third in the ARCA Menards Series event at the same facility. Raphael Lessard was sixth ahead of Zane Smith, who led the first 45 laps. The top 10 was rounded out by Grant Enfinger, Ty Majeski and Tanner Gray.

Sunday’s race saw a continuation of a season of frustration for Johnny Sauter, who retired 22 laps into the race with apparent engine problems. Sauter has posted three top fives and is winless so far in 2020. Since 2009, he has gone a full season without a win in the series just once.

When is Spencer Gallagher going to get his credit for putting together all the winning GMS racing cars and trucks?