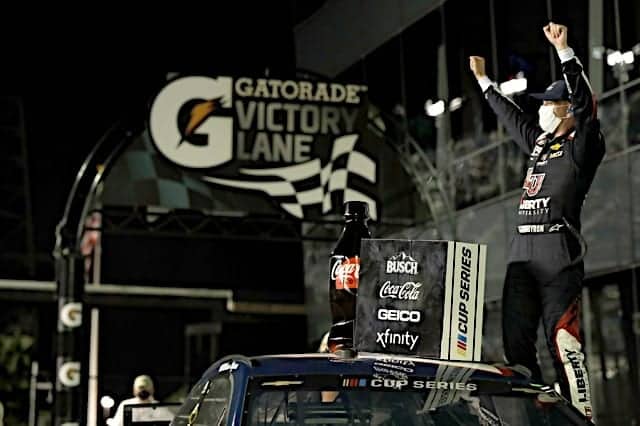 William Byron came into Saturday’s (Aug. 29) Coke Zero Sugar 400 at Daytona International Speedway with his back against the wall in the playoff hunt. But with the pressure at a maximum, Byron kept his No. 24 Chevrolet Camaro clean through it all to claim his first career victory to lock his spot in the Cup Series playoffs in the regular-season finale.

Byron took the lead from Denny Hamlin on an overtime restart and held off Chase Elliott at the checkered flag with several accidents happening behind them on the final lap.

Byron entered Daytona only a handful of points above Hendrick Motorsports teammate Jimmie Johnson for the final playoff spot. And with the unpredictable nature of superspeedway racing, Byron could have been swept up in an accident with his playoff hopes gone in an instant.

Instead, Byron’s first NASCAR Cup Series win comes in his 98th career start. By virtue of this win, Byron is automatically locked into the 16-driver playoff field on a night he led 24 laps. Saturday’s race is the third straight Coke Zero Sugar 400 that has produced a first-time winner (Erik Jones, 2018; Justin Haley, 2019).

“Just extremely blessed …,” Byron said. “It’s been a hard couple of years in the Cup Series, trying to get my first win and trying to gel with this team. These guys have done an awesome job today and got us in the playoffs. It’s awesome man.”

The race was incident-free up until lap 152, when Tyler Reddick threw an aggressive block on Kyle Busch to take the lead. The two slid up into the turn 4 wall, Jones ran into the back of Busch, and the crash was on from there. Ten cars were involved in total, and Jones’ playoff hopes were dashed after the accident, finishing 35th.

“It’s unfortunate,” Jones said. “He (Reddick) wrecked us at Pocono, and then to have this happen, it’s like two times with him just making crazy moves that weren’t going to work out. And unfortunately it was to the detriment of us today.”

On lap 159, another multi-car accident was triggered at the front of the field with catastrophic effects on the playoff picture. Hamlin gave an awkward bump to Joey Logano going into turn 1. Logano slid up into Wallace then spun around in the middle of the pack, this time involving 12 cars, most notably Johnson.

Johnson, the outgoing seven-time champion, suffered major damage while playoff bubble rivals Byron and Matt DiBenedetto cleanly escaped. Johnson finished the race in 17th place but will not be able to fight for an eighth series championship in his farewell season.

“Definitely disappointed to not be in the playoffs,” Johnson said. “It was our No. 1 goal to start the year. But there’s 10 races left, 10 trophies to go chase, and we’ll have to focus our efforts there.”

Logano kept his No. 22 Ford Mustang in the lead for 36 laps, winning both stages, but finished 27th after being involved in the lap 159 crash.

Congrats to William on his win. I wished i would have watched it now!