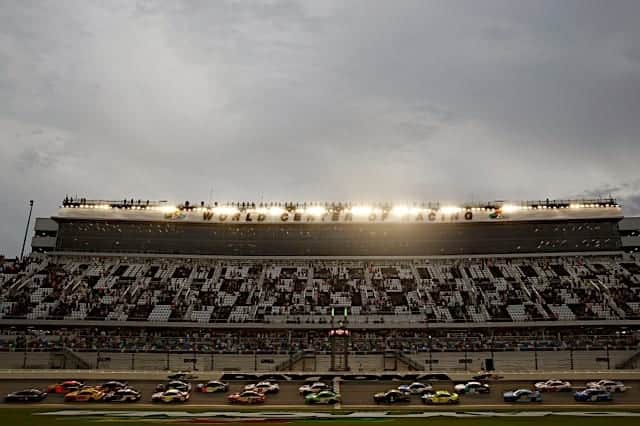 On August 29 at Daytona International Speedway, NASCAR hosted fans at a Cup Series race for the fifth time since returning to racing on May 17 after a 10-week hiatus caused by the COVID-19 pandemic.

Thus far, it’s been a success.

The All-Star Race at Bristol Motor Speedway in mid-July was the first venue to have fans back in the grandstands, to date the most for a single U.S. sporting event post-shutdown (30,000). Later that week, Texas Motor Speedway welcomed fans back to the track after postponing its first scheduled date in March. On Aug. 2, New Hampshire Motor Speedway hosted approximately 19,000 fans, before the series went to Daytona on Aug. 16 for the first of two races at the track over a two-week span.

At Bristol, Texas and New Hampshire, there were no COVID-19 outbreaks traced to fans who attended the Cup race at those tracks. In that regard, NASCAR has fared better than several short tracks who have dealt with tough situations. Ace Speedway (N.C.) had at least one pit crewman test positive after a late model race prior to the track’s forced closure. Meanwhile, Knoxville Raceway in Iowa canceled the remainder of their 2020 season, including the annual Nationals sprint car race, after having several in attendance at a weekly race test positive for the virus.

But that didn’t stop an eager racing fan base from making a trip to Florida. On this last Saturday in August, a lot was on the line in NASCAR’s regular season finale and many fans were overwhelmingly happy to be back in attendance. The track reportedly had close to 20,000 people in the grandstands.

A small cross-section of those interviewed by Frontstretch felt safe attending the event.

“I think NASCAR has taken all the precautions, the way they’re spacing the seating out,” Jason Schellinger — a Wisconsin native visiting his brother in the area — explained prior to the green flag on Saturday. “The fact that we’re all wearing masks, I think will help as well.

“I also believe in the common good of everybody; I think if people were sick, they wouldn’t come to the event. In general, I feel like everyone is going to take the necessary precautions, including NASCAR and all of its sponsors in order to make sure this is a successful event.”

Schellinger is married to someone that works in the healthcare industry, spending the last 20 years in the same household as a microbiologist.

Having some personal insight on different viruses, he was comfortable being in attendance at Daytona.

“I understand the severity of the pandemic, I understand the severity of the virus…. My overall thoughts on it is that viruses do what they do and they spread,” he continued. “I would love to think that us staying home or not going to the racetrack or not going anywhere is going to stop it from happening, but my true belief is — again, having spent the last 20 years of my life with a microbiologist — that viruses spread and that’s what they do. The human body has fought viruses for, I don’t know, how long has the human body been around? We’re still here.

Upon entering the grandstands, fans were required to wear face masks and also get their temperature taken to make sure they didn’t have a fever. Fans were allowed to carry clear plastic bags into the premises, which held supplies such as beverages, snacks, etc., replacing coolers that they typically could bring in the past. There were also many track employees holding signs reminding people to “social distance” and “wear your masks.”

Outside in the fan zone, near the souvenir haulers, there were multiple crowd control stanchions and hand sanitizing stations, with posters alerting fans to maintain distance six feet apart. Meanwhile, limited concession stands were open, as were select parking lots.

While respecting those guidelines, fans were delighted to be back at the World Center of Racing.

“It just seems like they’re putting the protocols into place, trying to keep everyone having their mask on,” Michael Houseman from Georgia said. “They have sanitizing stations at every [souvenir] trailer, every entrance is the main thing for me.”

Attending the night race at Daytona has always been a dream for Houseman, so his girlfriend purchased tickets once Daytona began selling tickets for the Coke Zero Sugar 400.

Meanwhile, Sharley Porter, 70, is a former souvenir worker at DIS. She says she’s been a fan of NASCAR since “the fight” in 1979 between Cale Yarborough and Donnie Allison in turn 3 after the Daytona 500.

But even though she’s a Florida resident and high risk based on her age, she wasn’t missing the regular-season finale, especially because she had “great seats.”

“I called and talked to [customer service],” she said of why she was comfortable attending on Saturday. “I’ve been coming to the summer race for the past 20 years and I know that [Daytona] will never let anything bad happen.”

Patricia Ryerson, who lives between Orlando and Tampa, came back to Daytona for the sixth straight season with her husband. With a big No. 19 plastered on her t-shirt to support Martin Truex Jr., she wanted to be at the track for what was sure to be an entertaining race.

“I’ve been following the safety precautions you have for us, we feel safe,” Ryerson said. “We’ve got our backpacks, got our masks in there. They’re segregating us in the seating area. We just love it. We’re coming back for the Daytona 500 in February, too.”

Then there’s Josh Cochran, who took advantage of the limited capacity to bring his two sons to their first NASCAR race. He has real-life experience with the coronavirus, given he’s one of the more-than-six million people who has contracted the disease.

After being diagnosed on June 23, Cochran had COVID-19 for roughly six weeks, through the end of July. With firsthand experience of what the virus was like, he wants the world to get back to normal, including NASCAR having fans at more tracks.

“I think the pandemic is overrated,” he said, as to why he was comfortable being at the track.

Cochran said based on the seating chart he saw at checkout, he would be sitting on one end of a given row in the grandstands while the next group of people in the row were all the way at the other end. People would be staggered throughout the stands on the frontstretch, while there were limited campers in the infield.

To be clear, these fans were just a small snippet of those shuffling through the gates this weekend. Many still remain uncomfortable with the idea of returning to a racetrack. But NASCAR’s ability to sell tickets over multiple events, along with these interviews, make it clear there’s a sizable portion of the fan base willing to do it.

When the Cup playoffs begin this weekend at Darlington Raceway — the same track that hosted NASCAR’s return in May — there will be up to 8,000 fans in attendance. NASCAR hopes fans continue to stay safe amid slowly returning to the racetrack, following protocols.

“Our fans are the most loyal and passionate in all of sports, and their enthusiasm on race day is the reason we compete each week,” Steve Phelps, NASCAR president said in a statement provided to Frontstretch. “It’s been fantastic to see them back at the track for select races, including this past weekend at Daytona, even if in a limited capacity. We have great respect for the tremendous responsibility that comes with creating a safe environment for our fans and the local communities in which we race, and will continue to take a measured approach.”

So none of us fans that attended Talladega on June 21st and again for the rain out date June 22nd matter? Or did that just not happen since it didnt fit the shutdown narrative at the time.