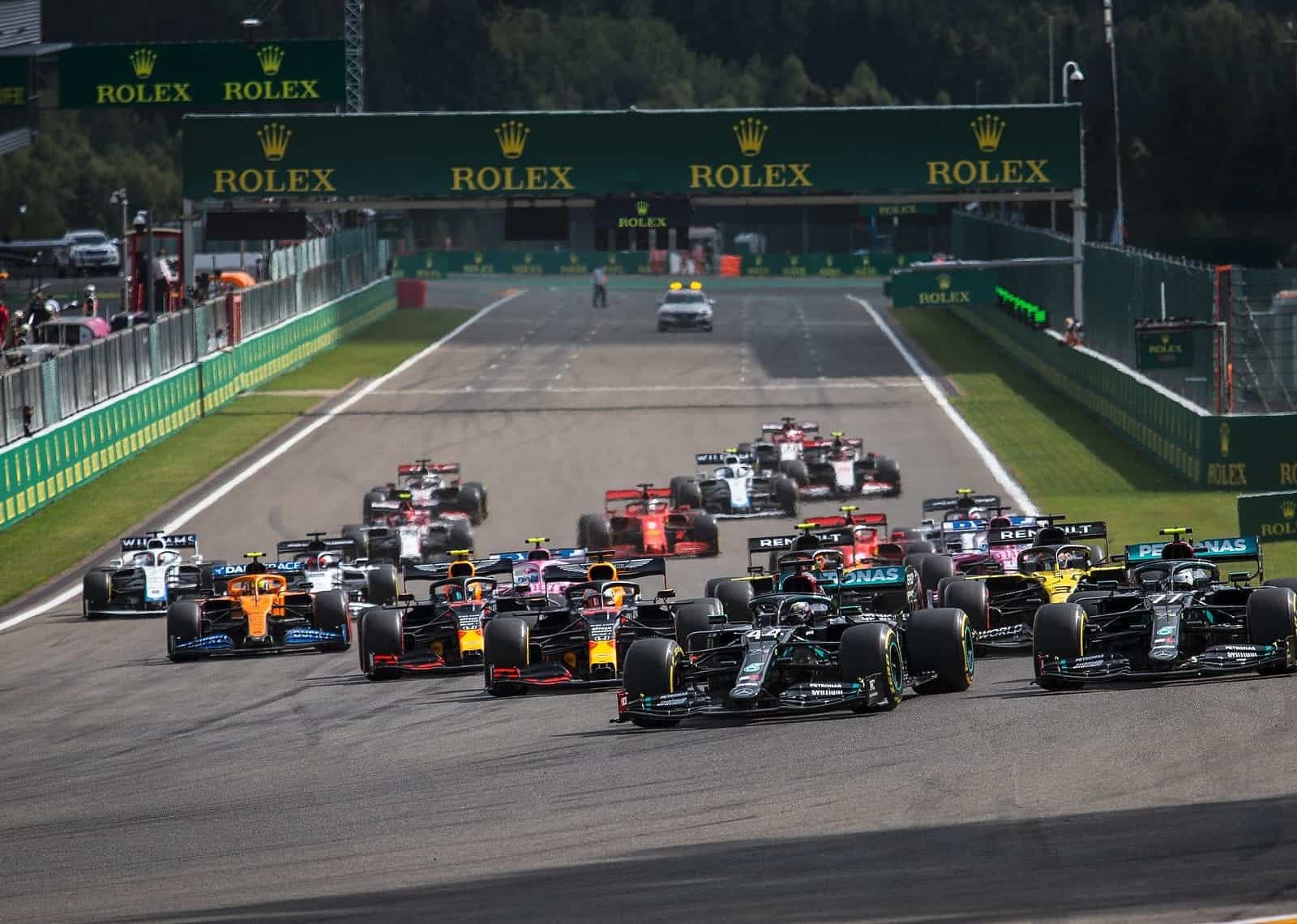 On Sunday, Lewis Hamilton moved within two wins of tying all-time leader Michael Schumacher.  Hamilton earned his fifth win of the season at Circuit de Spa-Francorchamps and further distanced himself from the field in his quest for a seventh driver’s title.

He now has a tidy 47-point gap on Max Verstappen and 50 over his teammate Valtteri Bottas.  That means that seven races into the season he already has a nearly two-race points advantage over his closest competitor.  Sure, there are 10 more races to go but Hamilton can essentially DNF two of those and he will still either be leading or able to pounce on whoever may be threatening him.

Mercedes have begun to look like the New England Patriots – methodical, cold, overwhelming, overpowering, and unstoppable.  With Hamilton playing the Tom Brady role and executing Toto Wolff’s race-plans to perfection, he looks sure to claim the title while also pushing the wins record further beyond reach.

He is as fascinating to watch as he is dominant.  Yet Hamilton has also made his race wins look commonplace, cruising to victory in at the Belgian Grand Prix that it stretches the imagination to think that he might actually be working in the car.

At the start of the race, Hamilton got away clean, built enough of a gap that he could evade any pressure from Bottas or Verstappen, and then skipped away from any facing any challenge.

Even a safety car for Antonio Giovinazzi’s wreck which brought the field back together failed to incite any drama.  The Sky Sports announcers went so far as to lament that the clouds near the track did not appear to be bringing any rain, something that disappointed the for not making the race more entertaining.

That’s what a sports dynasty does, making the impressive look mundane and throttling the competition to the point of taking away hope.

– They have floundered for much of the season, seem to be more caught up in protesting Racing Point than doing anything memorable on the track, but at the Belgian GP, Renault came to play.  The team started off strong, then Daniel Ricciardo shot to fourth in qualifying – a remarkable result considering that the French organization has looked lazy in qualifying all season.

Ricciardo then held strong through the race.  He tailed Verstappen for much of it before falling back because of his pit stop.  Rather than maintaining his position, as Renault has seemingly done at every event, he raced back through, passing Alex Albon and back into fourth, where he ended the day.  Along the way he also collected the fastest lap award, earning an extra championship point.

To complement Ricciardo, Esteban Ocon quietly snagged fifth and gave the French team their best overall result of the season.  With McLaren, racing with engines supplied by Renault, continually besting the French team, a result like this one will go a long way in the fight for the mid-pack for the rest of the season.

– Let’s face it.  Ferrari is bad.  Like borderline terrible.  If they did not carry the Prancing Horse badge, the results might be understandable.  But it is Ferrari.  Sebastian Vettel finishing 13 and Charles Leclerc 14 without any technical troubles is laughable.   It is going to be a long year for the tifosi.

For more, read our Alex Gallacher’s piece on Frontstretch:  What is happening to Ferrari?

– For a team that is likened to being Mercedes Jr., Racing Point seems to have fallen off a bit.  Driving what many people see as a 2019 Mercedes, the team started the season strong and looked to be a challenger to McLaren, Renault, and even Red Bull.  That notion has since falling off like the soft tyres at Barcelona.

Racing Point is still showing solid pace but it is clear that the engineering department is struggling to make the changes each week to continue the pace they set.  Their qualifying results are strong but their race results are not matching the performance.  Should the team make some adjustments in figuring out their downforce packages, there is little doubt that they will again be near the front.  Until then, they look like they might have to start battling AlphaTauri on a regular basis.

– Antonio Giovinazzi’s wreck looked in one word, weird.  He barely touched the kerb and did not appear to do anything wild coming out of the turn before he lost his Alfa Romeo.  His subsequent spin and then carom onto the track sent his front tyre hurdling down the track where George Russell plowed into it.

Both cars looked terribly mangled after the incident.  The question from the accident is: just what happened to Giovinazzi?  The tyres did not fail.  He was under power.  It seems that it was just a freak accident.

If there is anything to be gleaned from the incident it is how the Halo device should be lauded.  One need only recall IndyCar driver Stefan Wilson’s death, caused by flying debris that struck the driver in the head, to applaud the implementation of the Halo.  Giovinazzi’s flying tyre may not have hit Russell’s cockpit directly, but it was close enough to recognize the device’s importance.

“My engineer told me the current fastest lap with a lap to go, and it was about half a second quicker than what I’d done. And I wasn’t really wasting too much time but I thought I’d put a proper qualifying lap in, used all of the track everywhere and it was a big lap – probably better than my qualifying lap yesterday!” – Daniel Ricciardo and his joy at Renault bringing a fast car to the Belgian GP.

“We continue to learn about ourselves, the car, how we develop and improve weekend in and weekend out, and honestly it’s crazy to think I’m 35 going in to 36, but I feel better than ever so that’s a positive.” – Lewis Hamilton on his impressive season so far.

“That move on Perez I saw the opportunity and I committed. He really squeezed me, I don’t know how many centimetres I had on his side but not many. I knew I would not leave there – I wanted to make the move. I don’t know how it looked from outside but from inside it was a pretty good one.” – Pierre Gasly, Driver of the Day, discussing how he earned eighth.