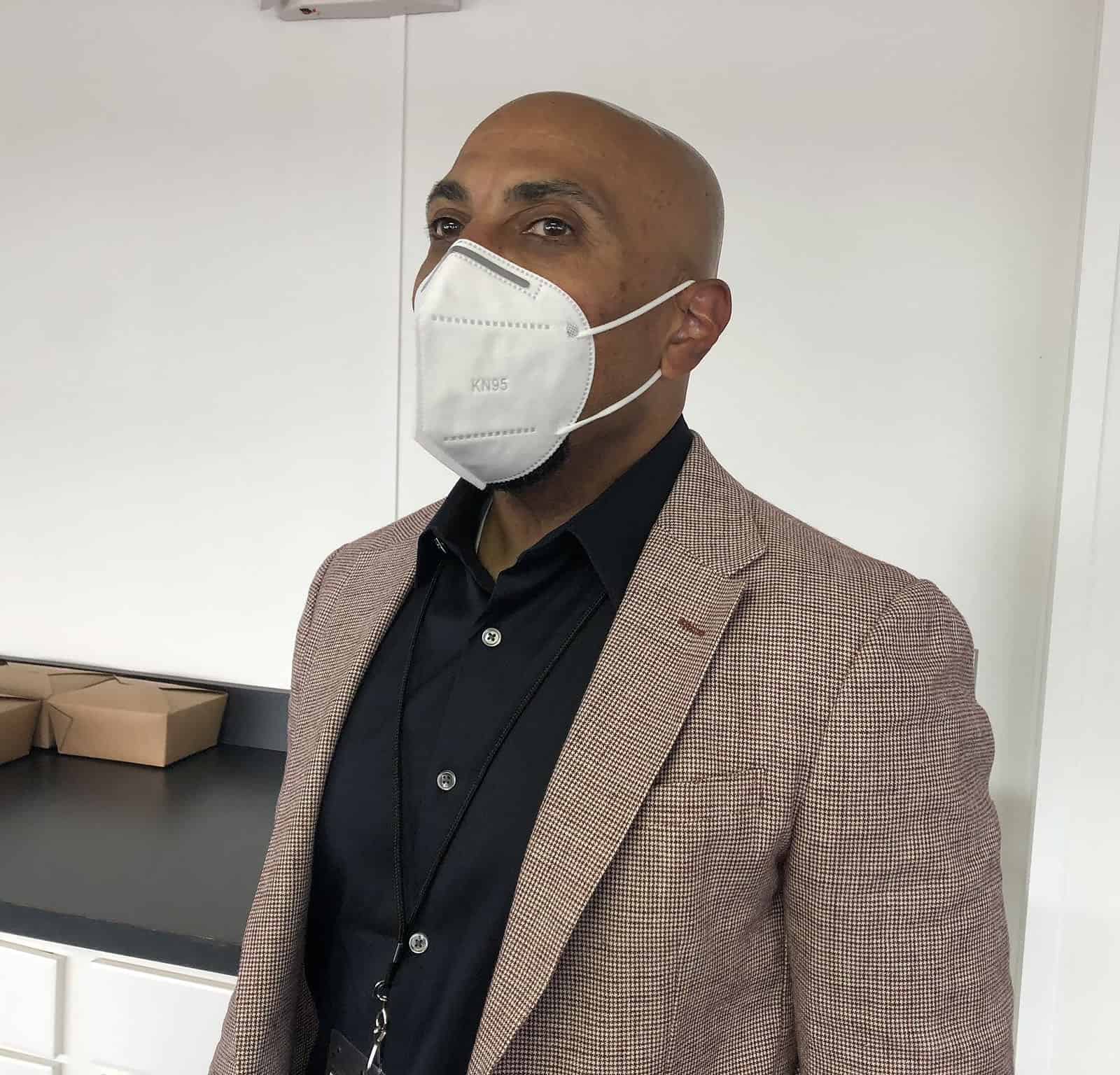 In preparation to launch the XFL’s team in the nation’s capital, Erik Moses ventured two hours south to Dover International Speedway last October to see how NASCAR went about making the fan experience enjoyable for all.

He struck up a conversation with Dover track president Mike Tatoian, and 10 months later, Moses had his own track to preside over.

On Aug. 22, NASCAR named the mid-Atlantic media and entertainment mogul president of Nashville Superspeedway, making him the first Black man to hold that position in NASCAR history.

“I’ve been a big fan of NASCAR as a business for a very long time,” Moses told Frontstretch. “Especially the way they deal with fans and create an environment for the fan experience. In fact, that’s how Mike [Tatoian] and I started to get to know each other. We started talking and became friends, so when the need for someone to lead the effort in Nashville popped up, thankfully Mike called me. We talked about it for a while, and the more we talked about it, the more I realized it was the right next challenge for my career.”

Moses called it “an honor” to be the one chosen to lead the Superspeedway’s return to becoming a regular presence in NASCAR competition, but also made it clear he was far from the first African-American in the industry to be certified to lead a venue.

“I’m not naive enough to believe I’m the first person of color to be qualified enough to be a track president for NASCAR,” he said. “But I’m happy the folks at Dover were confident with my knowledge, expertise and experience to take on this, and also the folks at NASCAR are equally confident in my ability to lead this effort. I’m happy about that.”

Moses, who graduated from the University of North Carolina and has a law degree from Duke University, is well known and respected in Washington D.C. circles. He currently serves as a member of the Washington Business Journal Leadership Trust and was named to its 2019 Power 100 list, was recognized by NBC Sports Washington as a DC Sports Power Player, and has served as an adjunct professor in Georgetown University’s Sports Industry Management Program since 2010.

But now being in the national spotlight, he’s already noticed more attention being paid to him, specifically given this trailblazing role.

“It’s humbling,” he admitted. “You turn on the television, and my kids are texting me like ‘Dad, your name is on the bottom of ESPN!’ and I’m like, ‘OK, that’s pretty cool.’ But I’m going to be focused on the work. I got hired to do a job, and I’m going to be spending my time and energies working on that and getting that right.”

NASCAR has been at the forefront of displaying solidarity with the Black community in the past few months, from Bubba Wallace‘s “Black Lives Matter” paint scheme at Martinsville, to the unity shown pre-race at Talladega and more. That’s not lost on Moses.

“I was obviously pleased with the stance they were taking and supporting their driver,” he said. “And I love the way all the rest of the drivers supported Bubba in that.

“I told Steve Phelps this when he called me last week to welcome me to the NASCAR family. I said, ‘I was very impressed with that and how they’re working collaboratively.’ These folks hired me to do the job, I’m going to be focused on doing the job, and if there are other ways that I can help out with NASCAR to try and extend this sport to all fans and let them know they’re welcome and we want them, then that’s what I’m going to do.”

“This is an important decision for our company,” he said. “I knew along the way that we had a lot of qualified candidates, and Erik’s skill sets were very much appropriate for what we needed out in Nashville, as far as not only executing a great Cup race, but also his experience with curating events. That’ll be an important element to Nashville Superspeedway — not only a great Cup race, but the other events that we can curate there.

“He’s got tremendous leadership skills, and you can see that as we were going through the differentiation of candidates. We felt that Erik had all the qualities we needed to a good bandwidth of skill sets, and he was the lucky winner.”

Moses is in the process of completing the move to the Nashville area and visited the track about one month ago. Although new to the NASCAR industry, he’s heard the rumblings and interest surrounding the famed Nashville Fairgrounds, but obviously remains focused on the Superspeedway.

“The more racing the better, but I also think there’s a pent up demand for having it locally in the middle Tennessee area, and we’re going to meet that demand,” Moses said. “I think, quite frankly, it’s going to be a great place to watch racing. I think it did well in its 10 years in existence. But without a Cup race, it’s hard to make that work anywhere. I think even in a place like Nashville in middle Tennessee, these folks travel all around the country to follow NASCAR, and we want them to not to have to travel too far.”

Moses’s resume speaks for itself. He was just leading one of the more prominent XFL teams before the COVID-19 pandemic forced the cancellation of the season and is extremely well-connected in the D.C. metro area. That’s where he’s been his entire professional career.

So why take this job?

“Coming off the experience I just had, I wanted to be very circumspective about what I was going to do next,” he said. “All that I have heard around the industry about [Mike Tatoian] in particular, but everybody at Dover, was unanimously positive. I wanted to make sure the folks I worked with in my next move were going to have their values aligned with mine, and who I knew would give me the support to take on the task they’ve hired me to take on. I feel very comfortable with that at Dover and the folks at NASCAR, who have welcomed me with open arms.”

In terms of goals, immediate and down the road, Moses is focused on getting the ball rolling on the Superspeedway’s return to Cup racing in 2021, and understands assembling a team of dedicated workers, while also leaning on the folks at Dover, will aid in his first foray with motorsports.

Furthermore, his objective is to reestablish the geographical area as a mainstay for NASCAR for years to come. Not only for the racing, but for the experience.

“For me, it’s also a rebrand for the track and for racing in that part of Middle Tennessee,” he said. “We’ve got to make sure that we stay in the public consciousness, that we communicate the type of experience that folks will have when they come to the superspeedway. I know a lot of people in that area, but I’m going to know a whole lot more tomorrow, the next day, week and week after that. That process needs to start ASAP.”

The Music City is already home to multiple professional sports teams and is in the process of growing that footprint. Moses’s vision is to have the Superspeedway in the same breath as the teams that have become synonymous with the city, and the community involvement will follow suit.

“I think it’s about becoming an indispensable and invaluable part of the sports landscape in Tennessee. You’ve got the Predators, the Titans, MLS is coming out there, there’s some talk about a baseball team maybe coming. I think racing fits in nicely. I could not think of a better city to be moving from my beloved Washington D.C. to continue my career than Nashville. It’s hot for all things: sports, entertainment, live events, and they’ve got some pretty good hot chicken too.”

To some, the timing of hiring a Black man in a leadership position for a predominantly white sport is not a coincidence. Tatoian realizes that thought process, but encouraged those to view what he’s done, and the rest will speak for itself.

“The easiest thing to do is look at his experience,” he said. “He is well positioned to have a big impact on our company from a leadership, event curation and executing events standpoint. If you look at his resume, I think it really does dissuade people from thinking it was just a current, convenient decision to make.

“We were looking for the best qualified president of our track. Regardless of male, female, political persuasion, race, we were just looking for the best person. Erik, we felt, had all the skillsets. His resume and experience does prove that out. If people will just take one more second to look at his qualifications, they’ll find out he is well qualified to do great in this sport.”

Why is it so damn important that I know that this man is black? He’s obviously qualified for the job. His race has nothing to do with his ability to perform. In fact many would take it as his race was the reason he got the job. Which would be wrong..