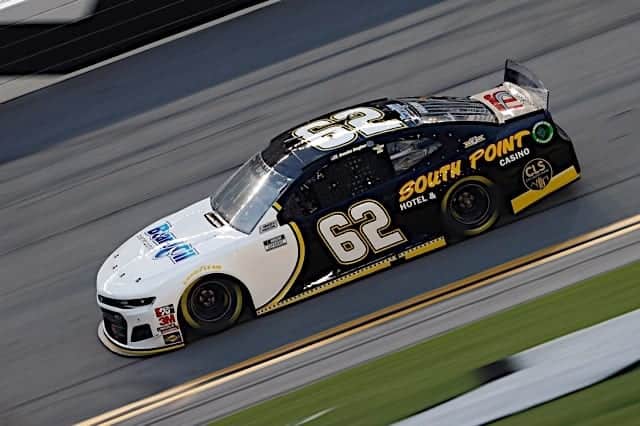 William Byron began the race on the playoff bubble, and one way he could assure himself a spot was to win. And win he did, taking his first Cup Series victory in his 98th try. Byron held off teammate Chase Elliott and Daytona 500 champ Denny Hamlin for the win.

It didn’t come without controversy, though. Byron set off a multi-car crash on lap 159 when he tried to take things four-wide between Joey Logano and Bubba Wallace, who were on the verge of avoiding triggering a pileup when Byron tried to fit the No. 24 where there wasn’t quite enough room, setting off the crash that ultimately guaranteed Byron the playoff berth, win or not, as it eliminated teammate and closest competition Jimmie Johnson from contention.

Superspeedway racing has its own skill set. Because of that and the way the track equalizes equipment, some drivers contend who aren’t on the list of usual suspects. The best of those drivers this week was Brendan Gaughan, who drove his Beard Motorsports part-time effort to an eighth-place finish. 2020 marks Gaughan’s final year of NASCAR competition, and his final race will be at Talladega. Another top run there would put a little icing on what’s been a respectable career for Gaughan.

Somewhere, Jimmie Johnson is lamenting two races’ worth of missed opportunity. He spotted Matt DiBenedetto and Byron two entire events’ worth of points in the playoff race after a disqualification after a second-place run at Charlotte and missing Indianapolis due to illness, and still had a shot in his last try.

Johnson could have had some choice words for his young teammate afterward, or let silence on the matter speak for him. Instead, the first words out of his mouth were congratulations to Byron (and his own former crew chief Chad Knaus), and he followed that up with a visit to the No. 24 team in Victory Lane.

That’s pure class, something Johnson has displayed throughout his stellar career, and perhaps, what the sport will miss the most when he makes his (graceful, as always) exit. It’s not something that might have come from many drivers in Johnson’s situation, but it’s quintessential Jimmie Johnson. He’s hard to match on talent, and even harder to match on the class he has displayed until the bitter end.

Another young driver who triggered some havoc was rookie Tyler Reddick. Reddick was racing Kyle Busch for the lead when he moved to take the top line and misjudged a fraction, scraping the wall.  That triggered the first multi-car incident of the night, collecting nine other cars. What earns Reddick redemption is his reaction to the incident.

Instead of passing off the move as a racing deal, or blaming his spotter, when asked about the other drivers involved being angry with him, Reddick said, “They weren’t wrong…they’re right to be upset, I feel like. If someone made that move on me, I’d be pretty upset, too.  I was just too late.  I was clear for a second and when I slid up, it messed the 18 up and caused a big wreck. I totally understand them being upset…it was a really stupid move.”

There are a lot of veterans who would not have handled the situation with such grace.

Polesitter and last Sunday’s winner Kevin Harvick didn’t have to have a great night, having already sewn up the regular season title, and he didn’t. Harvick finished 20th, the last car on the lead lap, but he still hits the playoffs with plenty of confidence and momentum…and the top seed.

Daytona 500 winner Denny Hamlin also enters the playoffs with plenty to be confident about.  He finished third this time around the Daytona high banks, and he’s in the best spot he’s ever been in to contend for the Cup title.

Reigning Cup champion Kyle Busch has not won in 2020, and it looked as though his luck was finally going to change on Saturday…until Reddick’s costly mistake, which took Busch from poised to finally find Victory Lane to finishing 33rd. In contrast to Harvick and Hamlin, Busch enters the playoffs at a disadvantage…but with two of his best tracks in the first round. It’s do or die time for him now.

The race was marred by two late crashes, but it was the second that changed the complexion of the race. The field was already charged at the time after a red flag for the first big incident, and two veterans in Joey Logano and Hamlin battling at the front. Bubba Wallace got a run on the outside and Hamlin moved up, pinching Logano and getting the Nos. 22 and 43 way out of shape. Had nobody interfered, they appeared to have it saved, however, as the race drew into the final laps.

But it was Daytona, and Byron interfered, forcing his way into the front row, and already out of shape, Logano and Wallace had no chance. Byron slipped through unscathed, but all in all eleven cars were caught up, including Johnson, the final driver still in playoff points contention, who merely had to finish within a spot or two of Byron to win.

Johnson wasn’t the only playoff hopeful caught. Christopher Bell, Reddick, Wallace and Matt Kenseth also could have made it with a win.

It wasn’t Byron’s intention to cause a pileup or cement his playoff spot by crashing his teammate, but it wasn’t his finest hour, even though it resulted in the win.

Unlike Reddick, Byron was unapologetic. “There was no way I was going to lift,” he said afterward. “It was awesome.” The other 11 drivers might disagree.

We’ll have a rundown of all the paint schemes later this week (so stay tuned), and they run the gamut, honoring the cars of the past (and for some, the not-so-distant past as the other Hendrick cars all honor the retiring Johnson. Johnson reaches back further, honoring the only two other seven-time champions with a dual scheme.).

Not only does the weekend bring NASCAR’s past to the forefront, but the Southern 500 is one of its most important races, second only to the Daytona 500 in terms of how much drivers want that trophy. The playoffs aren’t on the line for everyone, but everyone will be gunning for the Lady in Black.

How… will they rack ‘em up for the playoffs?

Harvick enters with a 10-point advantage over Hamlin, and then, thanks to his playoff points, a decent cushion over Brad Keselowski (-28), Logano (-35) and Elliott (-37) in the top five.

Martin Truex Jr., Ryan Blaney, Alex Bowman, Byron and Cole Custer (whose inclusion and the point resets will automatically give him the rookie title) round out the top 10. Austin Dillon is tied in points with Custer and is the final driver in the field with at least one win on the year. Aric Almirola, Clint Bowyer, Kyle Busch, Kurt Busch and Matt DiBenedetto make up the rest of the field.

This year features a shakeup in some playoff tracks and dates, so nothing is certain this time around. Expect one of the more unpredictable postseasons in recent NASCAR history.

I think blaming Byron for the last wreck is not accurate. If I recall Joey indicated that contact with the 43 cut down his tire and that is what caused the wreck. One of those racing deals.

I agree and I am no Byron fan. Being an old JG fan I’d have preferred no one ever win another race in the 24 car (hahaha). Still, the last couple of laps at a restrictor plate track, making the playoffs on the line, and having never won a race, you see a hole you better go for it. Had Reddick been clear at all (and I am not sure he ever was) I wouldn’t have blamed him for going for it either. That’s exactly what NASCAR wants with RP tracks and the playoffs. Besides if Byron had been too out of line we’d have heard it from all of the drivers. Maybe I missed it but I didn’t hear too many drivers complain

I’ll have to parrot what the other two commenters said. Last laps for the win, all bets are off. it was “GO” time. You can’t blame Byron for Dirty Denny’s handiwork. I just don’t get barely mentioning Denny’s role in all of that, while coming down hard on Byron. Denny has a long history of causing wrecks with his dirty driving style (ask Chase Elliott, Joey Logano, etc.)