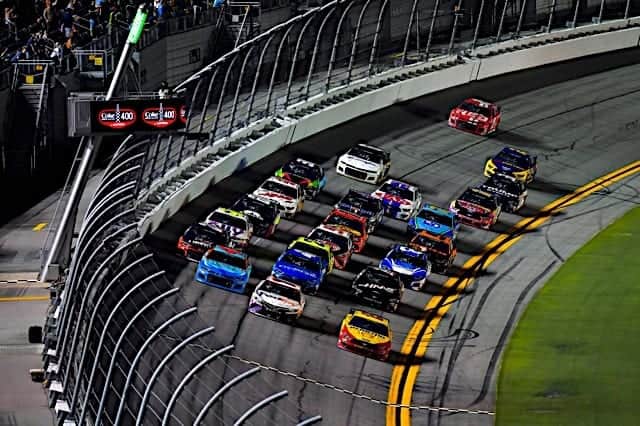 For the first time, the NASCAR Cup Series held its regular season finale at Daytona International Speedway, and it did not disappoint. Though the intensity revved up after each restart, the race stayed relatively calm after stage two until a late caution with about 17 laps to go.

Drivers fought for every bit of real estate they could get after the restart. After avoiding the first Big One, Bubba Wallace charged hard and battled with Joey Logano for the lead in the final few laps. Eventual winner William Byron pushed him to the front as Logano went into the middle. Logano and Wallace made contact, which opened a gap and allowed Byron to slice through. The No. 22 then got out of shape, causing a second Big One.

Wallace’s last shot for the victory and the playoffs went out of his grasp after suffering a tire rub.

The race then went into overtime, but Wallace was mired too far in the pack to contend for the win. While he still earned a top-five result, the No. 43 Richard Petty Motorsports pilot wanted more.

“A win was there and then it wasn’t,” Wallace said after the race. “On to the next one.”

A few underdogs struggled early on in the race, but late accidents in the final 10 laps benefited the darkhorses. One in particular was Brendan Gaughan, who’s competing in his final NASCAR season. He was involved in the incident with James Davison on lap 143, but thanks to attrition he rebounded to eighth at the checkered flag.

Gaughan had this to say at the end of the night:

”The Beard Oil Distributing Chevrolet Camaro had a heck of a run tonight. We saw paydirt there at the end — third place coming out of turn 4. The [No.]19 car just side drafted us and pulled us back. I didn’t have any help behind me but what a night. …

“Two top-10s this year at Daytona — what a way to go out. It was so much fun. We will see everyone in Talladega and we’ll actually be able to take the same racecar because it’s in one piece.”

The Xfinity Series also took to the high banks of Daytona and saw its fair share of underdog representation. Gray Gaulding earned a runner-up in his second start of the season after Chastain and AJ Allmendinger crashed on the last lap. Several others also had good results, including Josh Williams (ninth), Jesse Little (10th) and Vinnie Miller (11). Colby Howard was 12th in his first NXS event at Daytona, and Tommy Joe Martins earned a solid 14th.

While NXS and Cup raced in the Sunshine State, the Gander RV & Outdoors Trucks competed on the World Wide Technology Raceway at Gateway in Illinois. No underdog cracked the top 10 there, but Derek Kraus did earn a 13th. One other notable driver was Danny Bohn, who ended in 16th in his first Truck race since Homestead-Miami Speedway last year.

All three series take on Darlington Raceway this weekend. In Cup, look for FRM to perform well, as Nemechek finished ninth in the first race back in May and McDowell was 17th a few days later.

In Xfinity, Ryan Sieg hopes to stay in playoff contention. He ran seventh there earlier in the year, so another top 10 could certainly come his way. Additionally, Martins appears to have squashed his bad luck bugs and should earn another top 20 this week.

Last but not least, the Trucks take on the Lady in Black for the first time since 2011. Tate Fogleman cracked the top 15 at Michigan International Speedway; could he attain a similar result at Darlington? Also, don’t count out Dawson Cram; in his first race with the new family-owned team last week, Cram ended 22nd. It’ll be interesting to see who can tame this track and have a good result.

I’ve always been the fortunate one. But not for why people think. I’ve been the luckiest man alive because of the people that influenced & guided my life. 4 men, amazingly all named John.

I have so much I want to say but I just struggle to say it right now. I love you Coach?? pic.twitter.com/V7AyRHUBmh

Another top15! So proud of @TeamMartins! Also cracked the top20 in driver points & top25 in owner points – BIG milestones for our little team. 11 races to go & I feel like we’ve got some momentum – just wanna keep it going. Got a clean car for @TalladegaSuperS, too??GREAT NIGHT pic.twitter.com/DGuQQyCUkh

Man what a night, first superspeedway race and it was insane. Daytona was Daytona, there was wrecks, cars fell out, but we survived for a p12 finish! pic.twitter.com/ueUZb5t2ap

The checkered flag has flown and our @HairClub NO.56 truck comes home with a 21st place finish! More importantly we won the Hair Wars against @SpencerBoyd & @hanswiemann! All in good fun this weekend! We enjoyed everyone’s support! pic.twitter.com/CxKU5O1ukw

Not the night we wanted at all. Fought multiple different issues all race and went laps down after a visit to the garage. Incredibly disappointing, but just gotta remember that I’m still blessed to be here!! Onto Darlington. ? pic.twitter.com/8Jh7khQI30