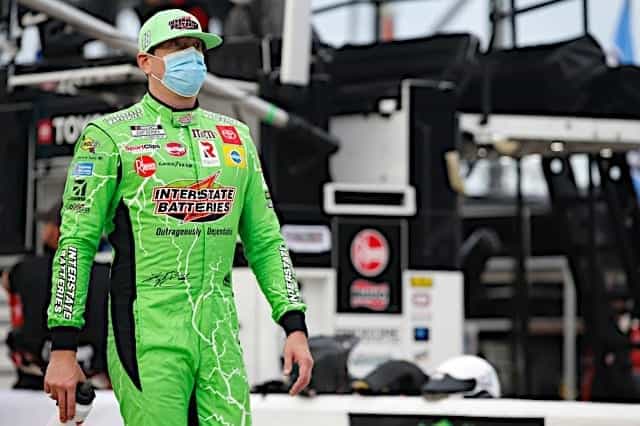 Kyle Busch experienced another frustrating finish to a promising race on Saturday night.  At Daytona International Speedway, in the last race of the regular season, Busch led for a total of 31 laps.  He was near the front of the pack late in the race and had a good shot at scoring a win.  But it all came unraveled on lap 152 when Tyler Reddick threw a late block on the No. 18 while trying to make a pass for the lead.  Busch checked up to try to avoid the No. 8, but the two cars made contact anyway, sending Busch into the wall and creating a stack up behind him that collected about 10 cars.  Knocked out in the first “Big One” of the night, Busch was relegated to 33rd place.

The poor finish, in of itself, doesn’t really hurt Busch.  He was already locked into the postseason prior to Daytona.  He didn’t even lose any positions in the overall points standings.

The real problem for Busch is that the playoffs begin next week and he and his team look ill-prepared to defend their NASCAR Cup Series title from last year.  In a season full of surprises, one of the biggest has to be that Busch has not won a single Cup Series race.  His year has been full of races just like Daytona – potentially good runs foiled by accidents, mechanical failures, and mistakes.  Otherwise, when Busch has made it to the finish, he’s usually among the top 10 or even the top five.  Yet the No. 18 is clearly lacking the explosive speed it has had over the last few seasons.  Busch is fast enough to keep the leaders in his sights, but only on occasions has he been able to truly challenge them for wins.  The result is a season’s worth of good performances but very few great ones.

The biggest difference between Busch in 2020 and Busch in the last few years is his lack of playoff points.  He accumulated only three this year: two for finishing ninth in overall points, and one for winning a stage at Kansas Speedway last month.  Three, that’s it.  Compare that to last year, when Busch took 45 playoff points into the postseason, the most of all drivers.  In 2018, he began the postseason with 50 playoff points, tied with Kevin Harvick at the top of the playoff grid.  Even in 2017, a year where Busch did not win until late in the regular season, he earned 29 playoff points.  While Martin Truex Jr.’s 53 playoff points dwarfed Busch’s total, only he and Kyle Larson carried more of them to the postseason than Busch.

This year, if Busch hopes to make his sixth consecutive appearance as a championship contender in the season finale, he’s got a big hill to climb.  By winning seven races and the regular season championship, Harvick racked up 57 playoff points.  Denny Hamlin is not far behind him with 47.  Other championship hopefuls like Brad Keselowski, Joey Logano and Chase Elliott have playoff point totals in the 20s.  Truex’s and Ryan Blaney’s playoff points are in the teens.  Even some of the biggest postseason underdogs like William Byron, Cole Custer, and Austin Dillon all managed to win a race and will start with more playoff points than Busch.

Some fans will suggest that it simply doesn’t matter how many playoff points Busch has right now.  They will point to Busch’s inarguable skill behind the wheel and his long track record of success with Joe Gibbs Racing.  They will say that Busch and his team are simply too good to get outrun in the playoffs and that having to fight from behind is no issue for the No. 18.

However, the above argument ignores just how vital playoff points were to Busch’s 2019 championship.  On the way to the season finale at Homestead-Miami Speedway, Busch scored three top fives and five top 10s in nine starts.  That’s not a bad stat line, but his fellow contenders in the championship four were all more impressive.  In the same nine race stretch, Truex earned three wins, four top fives, and eight top 10s.  Harvick had only one win but five top fives and matched Truex’s eight top 10s.  Hamlin collected two wins, six top fives, and six top 10s.  Most importantly, Truex, Harvick, and Hamlin won the three races in the round of eight and got automatic passage to the championship race.  That only left one spot for the highest remaining driver in points, which was Busch.

Busch didn’t win the championship in 2019 by being great in the playoffs.  He did it by being great in the regular season and good enough in the playoffs to keep advancing.  That’s not a knock on Busch.  He was still the one who stepped up and won at Homestead, the race that mattered most.  But Busch only got the final spot at Homestead by ending the round of eight with seven more points than Logano.  Logano actually outscored Busch in the round of eight 126 to 117, but the extra playoff points literally saved Busch’s championship hopes.

If Busch is going to challenge drivers like Harvick, Truex, Hamlin, and Logano for the title again, he won’t have that luxury.  The No. 18 team has to start winning regularly to advance, and there is no indication that that is going to happen.  While a 2011 Tony Stewart-like run through the playoffs is not impossible for a driver of Busch’s caliber, it should not be expected.  Busch himself has been vocal about a lack of practice time hurting his team’s performance, and that problem will not go away in the playoffs.  If Busch was really on the cusp of turning his season around, wouldn’t there be some kind of sign by now?

With no more time to spare before the playoffs, the performance of the No. 18 team remains confusing.  Considering Busch’s past success, the capabilities of JGR, and what Hamlin has accomplished this year, the ceiling of the No. 18 must be higher that what we’ve seen this year.  But Busch and his team just seem stuck.  If he really does make a run to the championship four and wins his third title this year, it will be among his most impressive accomplishments in NASCAR.  Always one to tout his own abilities, this is his chance to show what kind of difference “KFB” can really make.

Actually, this will be a good test to see how important playoff points are. If Busch runs top 10s and 5s in the next 9 races will the playoff points others have accrued still be an insurmountable hurdle. Although, given his regular season performance, it’s hard to envision him running that well. Sure he’s had some bad luck but there have also been a lot of races where he wasn’t in the same league as the cars/drivers that were dialed in.
Personally I hate the chase/playoffs and stage racing, but the playoff points have been a step in the right direction with regards to ensuring the champion performed well all year. There is a much higher probability of getting a worthy champion with this system than any of the previous systems (except for the season long points format, of course, but that should be obvious).

I’m not suggesting it will happen, but what if somebody suddenly goes on a tear and wins his way into the Final Four? Playoff point may not mean a thing, then. What if Cole Custer gains traction and wins his way in? There are too many variables with the final outcome being four drivers having a chance at the trophy and one driver winning it all.

A driver could lead every lap of every race right up to and including the Chase Championship race and crash on the last lap and still win the title if he finishes ahead of the other three “contenders”.