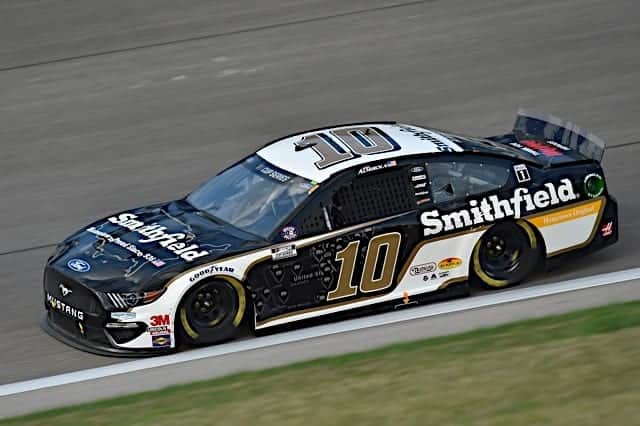 Aric Almirola, Smithfield Back at SHR in 2021

According to multiple reports on Tuesday (Sept. 1), driver Aric Almirola and sponsor Smithfield will return to Stewart-Haas Racing’s No. 10 entry in the NASCAR Cup Series in 2021.

The Smithfield-Almirola partnership in the Cup Series will continue after nearly a decade together. The Virginia-based food company has sponsored Almirola since 2012 in the Cup Series, as well as in several Xfinity Series races.

Aric Almirola to return to the No. 10 car next year with Smithfield as sponsor, per source. He has made the playoffs in each of the last three seasons. #nascar @NASCARONFOX

Almirola won the fall race at Talladega Superspeedway in 2018 with Smithfield on board, his second and most recent win in NASCAR’s premier division.

Almirola currently sits 12th in the 2020 NASCAR playoffs after a solid regular season of five top fives and 14 top-10 finishes. He enters the postseason with 2,005 points, with the first race set for this weekend at Darlington at 6 p.m. ET.

Adam Cheek joined Frontstretch as a contributing writer in January 2019. A 2020 graduate of VCU, he works as a producer and talent for Entercom Richmond's radio stations. In addition to motorsports journalism, Adam also covered and broadcasted numerous VCU athletics for the campus newspaper and radio station during his four years there. He's been a racing fan since the age of three, inheriting the passion from his grandfather, who raced in amateur events up and down the East Coast in the 1950s.
@adamncheek
Previous Germain Racing: All Options on Table for 2021
Next William Byron Signs With Hendrick Motorsports Through 2022