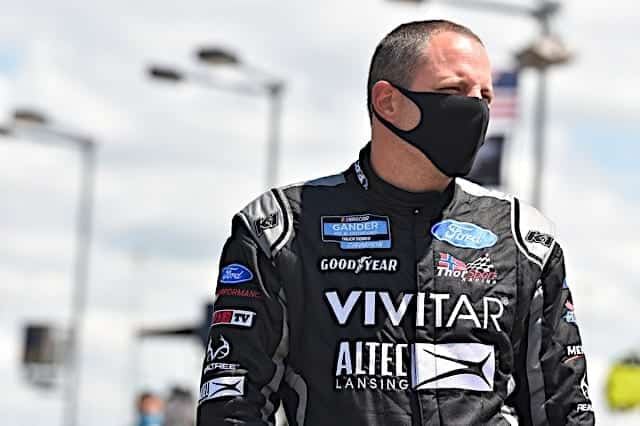 The 2020 NASCAR season has been a challenge for many race teams and drivers in all three national touring series, but the most disappointing year, at least in the Gander RV & Outdoors Truck Series, may belong to Johnny Sauter.

When the season began over six months ago ago at Daytona International Speedway, Sauter was entering the second year of his second stint with ThorSport Racing. His return year in 2019 was average at best, scoring his lone win of the season at Dover International Speedway in early May. He was then suspended in late June for intentionally wrecking Austin Hill at Iowa Speedway. Ultimately, it was an early exit from the playoffs for the No. 13 team, and he even had a win stripped away at Talladega Superspeedway for blocking below the out-of-bounds line on the final lap.

Overall, it was a dissatisfying season, and that unsatisfaction and frustration has delved far into the 2020 season with just two races remaining in the regular season.

“I would say we’re disappointed,” Sauter recently told Frontstretch regarding his 2020 season. “Obviously when they throw the green flag at Daytona, you think you’re going to go and have a barn-buster year. We haven’t had a terrible year, we’ve just put ourselves in some bad spots.

“As a whole, I think we had a lot higher expectations, but it is what it is now. We’re in a position where we need to win, so that’s what we need to focus on.”

Through the opening 14 races of the campaign, Sauter has just three top-five finishes, which is the fewest of the four ThorSport teams. He’s on pace to score roughly the same number of top 10s as he did last season (11), and he’s led laps in just three races this season for a total of 28 laps led. His 16.4 average finish is by far the worst of his 12 full seasons in Trucks.

Meanwhile, the No. 13 truck has four DNF’s, one of which was for getting disqualified after having its tires confiscated by NASCAR at Atlanta Motor Speedway. Sauter blew an engine at Texas Motor Speedway and got involved in an incident on a restart at Kansas Speedway. This past weekend at World Wide Technolgoy Raceway at Gateway — one of his best tracks on the schedule, as he entered with seven consecutive finishes of fourth or better — he completed just 22 laps before having drivetrain issues. Plus, the solenoid had come loose, and the truck had a possible broken bell housing. The truck flat out broke.

This comes three weeks after a late-race incident with Sauter’s ThorSport teammate Grant Enfinger, where the No. 13 crashed battling for the lead with less than 20 laps remaining at Michigan International Speedway. On top of that, the No. 13 team has received 10-point penalties on three separate occasions for failing pre-race inspection.

“That was simple, I made the mistake,” Sauter said of the incident at MIS. “I put myself in a compromising situation and spun out passing for the lead with 15 laps to go. I could have been a little more patient.

“Throughout the year, I don’t know that we’ve had the speed to contend for wins. That was one that just sticks out like a sore thumb that we had the dominant truck and I made a mistake. The rest of the year, we’ve been solid. We’ve just gotten too many penalties and too many points taken away, got disqualified at Atlanta.

“We’ve shot ourselves in the foot as a team plenty. You can’t do that at this level, so you’ve got to be buttoned up. We know that, and if it was one thing I could put my finger on … it’s just not. It’s always 100 little things, and we’ve just got to be sharp.

This season of frustration is difficult for all involved. And for a driver that’s been a viable championship competitor through the first four years of the Truck playoff era, it’s stunning.

“I’m surprised, for sure,” Sauter said. “I know the whole team is as well. Having said that, let’s be honest, luck is a huge part of racing, and luck has definitely not been on our side either. I don’t care how good you think you are, you still have to have a little bit of luck, and we’ve had none of that.

“It’s a huge disappointment across the board. It’s not from a lack of effort, I don’t think, so you can always hang your hat on that.”

Sauter believes the team has had decent speed in 2020, sometimes rivaling his teammates Enfinger, Matt Crafton and Ben Rhodes. But for the 2016 series champion, the numbers are staggering, especially compared to two years ago — his last season with GMS Racing — when he had the most wins of his career in a single season (six) and most laps led (585). That season came after consecutive years of 19 top 10s in 23 races.

The irritation of not getting consistent finishes “sucks” for Sauter.

The final two regular season races come at Darlington Raceway — the first time Trucks have run on the famed track since 2011 — and Richmond Raceway, which replaces the originally-scheduled date from April at the short track. Sauter has had success at both tracks, earning top-10 finishes in both of his starts in the series at The Track Too Tough to Tame and winning at Richmond in the NASCAR Xfinity Series. Granted, that win was 17 years ago.

But sitting 15th on the playoff board, 99 points behind Todd Gilliland for the final playoff spot, it’s a must-win scenario for Sauter — which he doesn’t find uncommon — to be part of the 2020 playoffs.

Sauter said: “I feel like I’m in a must-win situation all the time. I know what I need to do, and I know what I want to do. So we’re going to go and put our best effort forward, and honestly, it’s either going to work out or it’s not. That’s really how I feel about it.