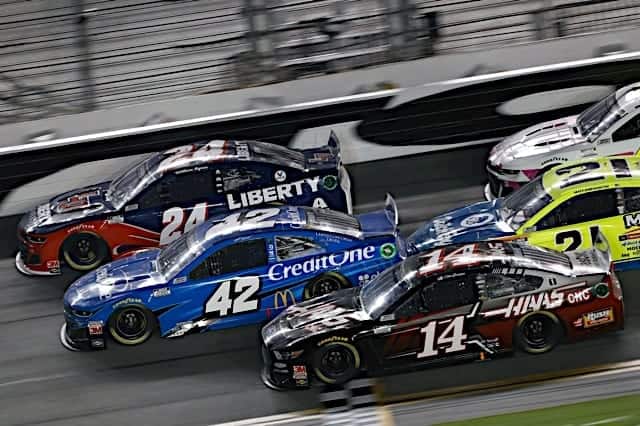 This season was the first year that NASCAR decided to have a superspeedway be the final decider in who would make it into the playoffs. With it being the biggest wildcard we have seen in many years, everyone knew the energy and excitement would be ramped up. It’s safe to say the race did not disappoint. Now discussion could follow as to whether or not NASCAR should keep it this way or if it should be a one-time thing.

Does this make the race to the playoffs that much better? Should the sanctioning body look into changing the cutoff race every other year or keep it at Daytona International Speedway from now on? What does this give us that other cutoff races could never give?

The lower series of NASCAR have produced some amazing talent throughout the years. This season seems to be no different, with several drivers in each series having potential to make some noise in the sport for a long time. One of these drivers in the Gander RV & Outdoors Trucks Series is Sheldon Creed. He leads that series with three wins this season and, in only his second full-time season, is looking to be a championship contender.

Is he the best prospect when it comes to Trucks and even the ARCA Menards Series? How far do you see him going in his NASCAR career? Who does he compare to when it comes to top drivers in the NASCAR Cup Series?

Q: Should Daytona always remain as the cutoff race for the playoffs or would you like to see the track change for the cutoff every other year? Randy T., Memphis, TN

A: Based on what we saw on Saturday night, Daytona as the cutoff race seems like a home run. While superspeedway racing is constantly unpredictable, it is such a thriller to have that for the final race to get into the playoffs. As much as we do not want to hear it, NASCAR is an entertainment industry, and that is exactly what this race brought us: entertainment and more.

Short track racing brings that same type of excitement to many, just without the unpredictability factor. That is what we had with Richmond Raceway being the cutoff race from 2004 until 2017, when Indianapolis Motor Speedway became the regular season finale for the next two seasons.

Richmond gave us some very good races, such as the walkoff win for Jeremy Mayfield in 2004, the close battle with Kevin Harvick and Kyle Busch for the win in 2006 while Kasey Kahne was simultaneously making his way into the playoffs over defending champion Tony Stewart and, of course, the controversy in 2013 with Michael Waltrip Racing and “Spingate.”

Once Indy took over as the regular season finale, something just did not seem right. While it was the Brickyard 400 and one of the biggest races of the season, it just did not feel like a cutoff race. The first year in 2018 was a great race between Denny Hamlin and Brad Keselowski, with Keselowski ultimately prevailing. Last season was not as memorable with Harvick dominating, but it was a good experiment for NASCAR to try.

Now with Daytona in that spot, it seems to fit every agenda. Think about it, you have 13 to 14 guys locked into the playoffs going into the race. Then you have the bubble points race for 15th and 16th between at least three to four drivers. Add in a superspeedway, and you now add another 15 drivers to the mix that can possibly get into the playoffs with a win. It may seem a bit gimmicky, but it definitely is entertaining.

Jimmie Johnson was the perfect example of how that racing can bite you hard though. After scoring 12 stage points between the first two stages of the night, the third stage turned out disastrous, and the No. 48 team ended up missing the playoffs. If this was an intermediate or even a short track, Johnson more than likely stays where he was running and makes it in. Instead, his Hendrick Motorsports teammate, William Byron, who was outside the playoffs most of the night, ended up winning the race and locking himself in.

It truly is crazy how quick fortunes can turn for the worse or the better in these types of races. This is what makes Daytona a great place for the regular-season finale in the future. Will it be permanent in that spot? My guess is no, but I can see it sticking for several years. I would love to see it for the next several years, just because it gives us that added excitement to look forward to the next week with the beginning of the playoffs.

Darlington Raceway is up next, and the Southern 500 is one of the best races every season. An exciting race, followed up by another exciting track is what we need in the sport. Drivers know how the superspeedway racing goes, but it did not seem like any one of them despised the race being the regular-season finale. Just think, Talladega Superspeedway stayed as the cutoff race for the Round of 12 for several years until NASCAR scheduled Kansas Speedway for that spot. NASCAR will stick with this for a while. Not sure how long, but we will see more Daytona regular season finales in years to come.

Q: Who do you think is the best prospect in the either the Trucks or ARCA Series right now? Rob G., Oxford, MS

A: You should keep your eyes on the Truck Series for this answer.

One driver who is going to be very good in this sport that many may not see now is Creed. While his win on Sunday (Aug. 30) at World Wide Technology Raceway at Gateway was a bit controversial because of the incident with Todd Gilliland, he has the talent to make it big.

He currently leads the series with three wins this season, coming at Kentucky Speedway, the Daytona road course and Gateway. As a rookie, he had some solid races last season, but it seemed as if he could not close the deal. Now with some experience under his belt, he is proving he has what it takes to maybe win a championship this season.

Creed is no stranger to success as he is an ARCA champion. This is a driver, too, who has off-road experience and some dirt racing experience. He can do it all, and as he learns asphalt racing year-to-year, he is only going to get better.

He reminds me of Tyler Reddick, who came from a dirt background like Creed but did not truly break out in the sport for a few years. Reddick had a solid stint in Trucks with Brad Keselowski Racing several years back, but never truly showed how good he was until his NASCAR Xfinity Series days. I’m not saying that is what will happen with Creed, but I can definitely see him breaking out in years to come. He is doing exactly that in Trucks this year, so I expect that to continue.

With the playoffs coming, he appears to be a favorite for this year’s Truck title. He could be a candidate to move up in the ranks in the next year or two depending on how much success he continues to have (and funding!). He is still extremely young, so there is no telling what his timetable could be if he ever does get to Cup. However, he is someone to watch for and will be for years. Many knew he had talent, and it would only be a matter of time before he would show it. He’s showing it in Trucks now, and do not be surprised if he continues to win races this year and become a NASCAR champion by season’s end.

I think it’s perfect, having a crapshoot race be the determining factor for a crapshoot playoff.

I think we need to hold any assessment for a normal year. Under this Covid format the racing has stunk imo so even I for the first time in years enjoyed a superspeedway race. I like SB’s touch above, it really is fitting :D

Well with the NASCAR season in the books, it was an interesting one I suppose. Full of a lot of dry moments and a lot of clean air once Covid hit. I had no idea the rookie of the year award was handed out at the end of the regular season. Likely cause this is the first year in a long time we have had a good rookie battle. Def bummed to see that battle end like that. Guess there really is no point to the playoffs outside of just the bubble drivers. I mean the guys up top are locked in, the rookie battle is secured, the regular season trophy was declared, now we just wait to see who advances to Pheonix and crown a playoff champion.