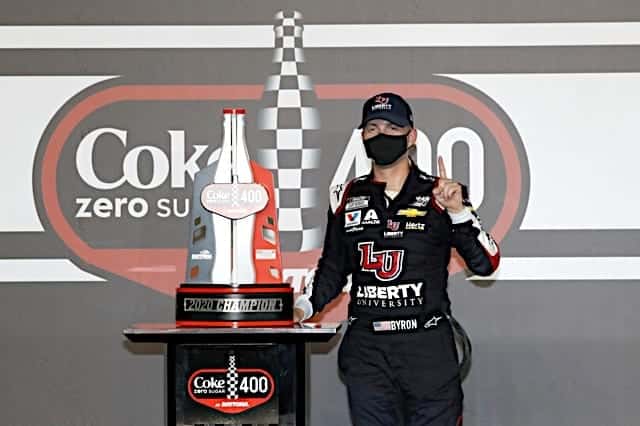 NASCAR Cup Series driver William Byron announced Sept. 1 that he has signed with Hendrick  Motorsports through 2022, extending his tenure at the team for an additional two years.

Byron, who just days ago scored his first career win in the regular-season finale at Daytona, shared a video on Twitter spotlighting some of his moments with the team, where he has been since 2018.

It’s been a fun ride so far with @TeamHendrick and I'm excited to finally share that I'm signed up through 2022 in the No. 24! Thanks for all the support. Now let’s go to Darlington and lock ourselves into the next round of the #NASCARPlayoffs. pic.twitter.com/mPu0nssZI8

Byron set the record for most wins by a NASCAR Gander RV & Outdoors Truck Series rookie in 2016 with seven, falling short in the championship hunt but winning the Xfinity Series title the year after.

Jumping to the Cup Series in 2018, Byron struggled in his rookie season before winning five poles in 2019. His first Cup win came at Daytona on Aug. 29, locking himself into the 2020 playoffs.

The extension was reportedly signed Aug. 8.

Hendrick says the Byron extension through 2022 was signed on August 8. #nascar

The Cup playoffs will get underway Sunday, Sept. 6, at Darlington Raceway, set to start at 6 p.m.