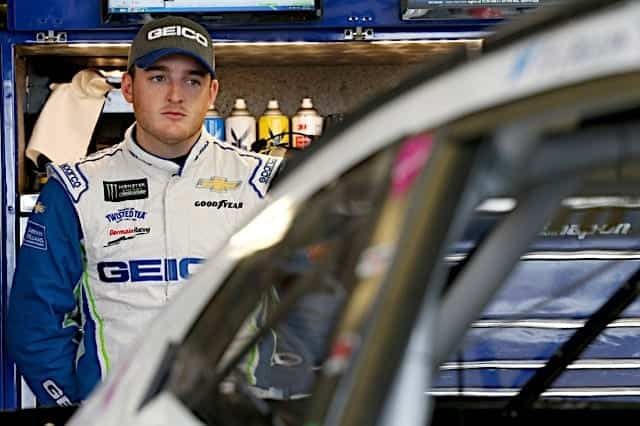 After the announcement that Leavine Family Racing would close following this NASCAR Cup Series season, rumors began to spring up that Germain Racing will be closing as well. Both driver Ty Dillon and its sponsor GEICO are in contract years. With the dwindling number of viable rides unspoken for or still in play for 2021, subtracting another team from the roster list poses a real dilemma.

Germain Racing statement on 2021 status: “At this time, anything is on the table. Germain Racing does not have a signed sponsorship contract for 2021 and Bob Germain is exploring conversations for a potential sale.” #nascar

What, then, would happen to Dillon if the team shuts down? In this edition of 2-Headed Monster, Amy Henderson and Mark Kristl debate whether he deserves another Cup Series opportunity.

Dillon Can Bring Valuable Assets to the Right Team

When Dillon joined Germain Racing in 2017, he was a young up-and-comer who had finished in the top five in points in both the NASCAR Xfinity Series and NASCAR Gander RV & Outdoors Truck Series. Sponsor GEICO had signed a three-year extension the year before, and Dillon brought something valuable to his Cup Series team: Richard Childress.

Childress is Dillon’s grandfather and was eager for his grandson to have a turn in a Cup car without turning over one of his own teams. Germain Racing already had a technical alliance with Richard Childress Racing that provided chassis and leased engines. All it needed was full access to RCR’s technical data and resources. And if the team took on Dillon, they’d get it.

Of course they bit.

Despite having signed their extension simultaneously with another driver, GEICO was satisfied enough with the promise of improvement that they finished out that deal and inked an extension through this season. But after that? They haven’t completed a new deal. If sponsorship doesn’t materialize, the team may wind up on the sale block, which could leave Dillon out of a ride.

Let’s face it: Dillon hasn’t set the world on fire in the Cup Series. Despite the improved resources, the No. 13 team never improved during his tenure, never finishing better than 24th in driver points and only seeing one top-five finish. Not exactly a ringing endorsement.

Dillon could still be a valuable commodity for a small team if Childress is willing to offer equipment and technical help in exchange.

Teams who would benefit greatly from such a deal could include StarCom Racing, which currently leases engines from ECR; or Premium Motorsports who also leases those engines; Rick Ware Racing; GoFas Racing; MBM Motorsports; or perhaps one of the prospective teams hoping to join the Cup ranks in 2021.

The Cup Series is tough to break into for a new team, especially those that are underfunded compared to the top operations. They struggle to find sponsorship, and without backing, it’s almost impossible for them to get better. If they don’t get better, they can’t attract bigger sponsors. It becomes a vicious cycle.

Dillon has Cup experience as well as experience and a handful of wins in Trucks and Xfinity, which is more than some of the drivers teams are taking on have. And he has the potential to bring equipment a small team can’t otherwise afford and information they would not otherwise have access to.

Dillon isn’t going to land a top ride, but he can help a team grow, and that’s important to NASCAR long-term. – Amy Henderson

If Germain Racing indeed closes, it would be a shame, but its potential closure should not result in 28-year-old Dillon receiving another Cup Series ride.

Dillon has not overwhelmingly displayed an abundance of talent. In both the Xfinity Series and Truck Series combined, he only has three wins. Yes, he finished inside the top five in the championship standings in all his full-time seasons in those respective series. But in the Cup Series, Dillon has made 152 career starts. He has only finished on the lead lap in 62 races (40.7%). He only has one top five and five top 10s. All but one of those came in the unpredictable races at Daytona International Speedway and Talladega Superspeedway.

So, he has been more lucky than good.

Dillon is now in his fourth full-time season in the Cup Series, all with Germain Racing. His four respective finishes in the championship standings are 24th, 27th, 24th and currently 27th.

This season specifically, he has been bested by four of the Cup Series rookies in the points. Furthermore, Ryan Newman missed three races following injuries suffered in the season opening Daytona 500 and is still ahead of him in the standings. Matt Kenseth took over as the driver of the No. 42 Chip Ganassi Racing Chevrolet four races into the season and is only 12 points behind Dillon.

Richard Childress Racing has an affiliation with Germain Racing. Both RCR drivers are well ahead of Dillon in the standings. Austin Dillon won at Texas, making the playoffs in the process, while teammate Tyler Reddick is 19th in his rookie season.

Going a layer deeper, Richard Petty Motorsports also has an alliance with RCR. The underfunded single-car team has shown flashes of consistency and much improved speed though 2020, and Bubba Wallace has improved as well. He is 86 points ahead of Ty Dillon in the championship standings – essentially two full races of points accumulation more than his affiliated teammate.

To worsen Dillon’s future in the Cup Series if Germain Racing were to fold, very few rides are currently available to him.

If Germain Racing closes after this season, Ty Dillon’s options in the Cup Series are looking bleak. Given his on-track performance and better options, Cup Series team owners should not hire Dillon. -Mark Kristl

A better question is; Did he deserve the first chance?

Maybe Childress should get rid of Reddick to open a seat for his other grandson.

I’m sure another seat can be bought out there.

What does it tell you when GEICO runs a NASCAR commercial and the car is yellow and has #82 on it? That’s about all you need to know about how they feel about how good a “racer” Ty is.

Both those kids belong in the grandstand

If Bubba bolts RPM, maybe we have a GEICO 43 with Th Dillon behind the wheel?

I wish Landon Cassill had been mentioned in the article. Gray Gaulding is also worthy of racing something full-time in Xfinity or Cup.

Think GEICO said it all when they became a series sponsor.Guess this will be an opportunity for one of those sponsors that Steve P. says are eager to get involved to step up.

If Richard can find a sponsor that could open up a 3rd car for Richard bringing back the #30. Or otherwise put him in the 21 xfinity full time. Or a second Xfinity ride. These are possible scenarios. Sponsorship is the key

@Arthur. I think by this time Richard is already cobbling together some sponsorship for a third Cup car (for Ty). I believe that this was the Childress/Dillon plan all along. My guess on sponsorship would be this rotation: Hershey’s brands including Reeses, South Point Casino for the west races, and Chevrolet parts & performance tied in with the C8 Vette. Then panel sponsors like Giant and others…

Grab Sheldon Haudenschild, talent and then some, a sponsors dream and a winner. !!!

What does “deserve” have to do with it?