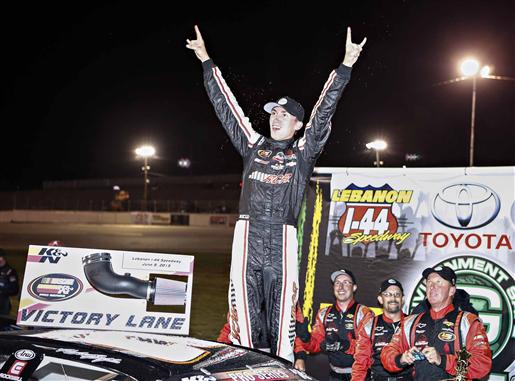 The ARCA Menards Series will race this Labor Day weekend at Lebanon I-44 Speedway. The Zinsser SmartCoat 200, the realigned race from Madison International Speedway, will consist of 200 laps around the 0.375-mile short track in Lebanon, Missouri.

Adam Mackey, the operations manager of Lebanon I-44 Speedway promoter Track Enterprises, spoke with Frontstretch about the venue, which has only hosted one ARCA Menards Series West event, formerly the NASCAR K&N Pro Series West, in 2013.

“That’s kind of the smallest track that ARCA competes at,” Mackey said about the upcoming race.

ARCA was slated to race at Elko Speedway, another 0.375-mile short track, this year. However, due to the COVID-19 pandemic, that race was realigned as one of the two races for the Toledo Speedway doubleheader.

“We’ve held some events here in Missouri back in May when everything was closed down,” Mackey continued. “It’s a nice facility, it provides for great racing and there is tiered parking for people in their vehicles. They tailgate which makes it a special unique twist to that race track when others cannot do so. For about 200 different vehicles, people can watch the race from their vehicles. The crowd came out and supported the event we had in May, and we figure similar type race fans will come out to see an ARCA race.”

Lastly, Mackey predicted the Zinsser SmartCoat 200 will be a fun race for fans.

“The short track aspect, the tight rubbing-is-racing type deal will come into play,” he said. “They will not be spread out like a 1.5-mile track. It’s three-eighths so it’ll all be tight quarters and provide for some great racing.”

Which drivers then will be battling for the Zinsser SmartCoat 200 victory?

At the top of the list is Michael Self. He currently leads the ARCA point standings, though his margin decreased following his 15th-place finish due to a wreck on lap 103 last time out at World Wide Technology Raceway at Gateway.

Self won that West series race at Lebanon I-44 Speedway in 2013. He led only six of the 153 laps, but he emerged victorious after spinning on lap 87.

After a sixth-place finish in the race at Gateway, Bret Holmes narrowed the gap to first to just seven points.

“I ran there in a late model in either 2015 or 2016, so it’s been a little while,” Holmes said in a Zoom call on Wednesday (Sept. 2). “I like the race track though. It reminds me of New Smyrna [Speedway], but not as narrow as New Smyrna. It’s a pretty neat little place.”

“On our short track stuff, we’ve got a little room to improve compared to our speedway stuff right now,” Holmes continued. “I don’t save a lot as far as tires go during a run. I go 100% the whole time. I need to work on my restarts a little bit, and the shorter part of the run, but those long runs are where we are good right now. We’ve typically been a third-place car at these races, so we need to get a little bit better to get either first or second.”

Holmes, therefore, expects to finish inside the top three in the Zinsser SmartCoat 200, but he believes he is capable of winning the race. He has experience in this particular No. 23 Chevrolet.

“We’re only using two or three cars, mainly sticking with one short track car and one intermediate car,” Holmes said. “This weekend, I’m running the same car [I ran] at Gateway and then for the next couple [races]. We feel like the more we can build in a notebook on a car until we get to the level of winning races, that’s what we need to do.”

Drew Dollar and Hailie Deegan are the only other two drivers who have competed in every race thus far this season.

Dollar notched his ninth top-10 finish at Gateway, lowest of the four full-time drivers though.

Deegan rallied from a late-race spin at Gateway to finish ninth. However, she only has two top fives this season, with a career-best finish of second at the season opener at Daytona International Speedway.

“I’ve never been to I-44, but it looks like a fun track,” Deegan said in a team release. “I enjoy racing on the short tracks. It will probably be new to almost all of us since it is not usually on the ARCA schedule. It’s not on the Ford Performance simulator, so about the only thing you can do to prepare is watch past late model races from there. We won’t have any notes to go off of from previous races, but my DGR-Crosley team always brings fast Monster Energy Fords to the track, so we should be good.”

Her teammate Taylor Gray is one position behind her in seventh in the Showdown point standings, despite missing the first race at Phoenix Raceway. In six career ARCA starts thus far, Gray has completed all but one lap.

“Coming off our strong run at Gateway, I am ready to get back to the track at I-44,” Gray, the 15-year-old driver of the No. 17 DGR-Crosley Ford, said in a team release. “I have never raced there, so I think preparing as much as possible this week is going to be important. I hear it’s a really fun track, so I am excited to get out there and see what we can do.”

Additionally, the top three in the Showdown standings, Chandler Smith, Ty Gibbs and Sam Mayer, all will compete in the Zinsser SmartCoast 200. Combined, they have eight wins out of the 13 races this season. They too will likely be upfront for what is only a 75-mile race.

The Zinsser SmartCoat 200 will take place on Saturday, Sept. 5 at 9 p.m. ET with TV coverage provided by MAVTV and will be available on TrackPass on NBC Gold.