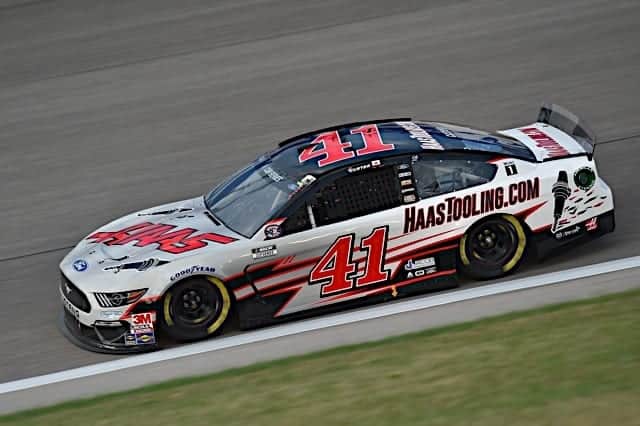 Entering the 2020 NASCAR Cup Series season, a flock of rookie drivers took the world by storm, moving up from the Xfinity Series. The results are in, and Cole Custer is the Sunoco Rookie of the Year.

For the opening part of the season, Custer was average, posting just one top-10 effort through the opening 15 races. Meanwhile, his rookie counterpart Tyler Reddick showed a lot of speed with Richard Childress Racing, while John Hunter Nemechek had a few standout performances with Front Row Motorsports and Christopher Bell struggled, though still managing several breakthrough runs.

But once the Brickyard 400 came around on July 4 weekend, Custer upped his game, pushing Stewart-Haas Racing teammate Kevin Harvick to the victory on a late-race restart. All the while, the No. 41 team earned its first top-five finish of the season.

The following weekend at Kentucky Speedway was monumental, as Custer stamped his name into the record books as a winner in the Cup Series. How’d he do it? By going from sixth to the lead on a green-white-checkered, pulling off arguably the biggest upset of the season. After all, the last rookie to straight up win a race aside from weather-related conditions was Juan Pablo Montoya … in 2007.

As the regular season wound down, Custer continued to be competitive, earning a total of five top 10s over the final 12 races. And with no other rookies winning a race, the California native is automatically granted the Rookie of the Year award, as it goes to whoever finishes highest in points.

“It’s huge,” Custer said on Wednesday (Sept. 2) on opening day of playoff media day. “To be able to race against those guys: Tyler, Christopher, John Hunter, I think we all made huge strides this year and we were fairly competitive.

“It was definitely cool to race these guys for the last five to 10 years and to move up to the Cup level and still have that battle going on.”

Since the regular-season finale at Daytona International Speedway, Twitter has been amped up over how the Rookie of the Year award is handed out. After all, at the end of Daytona, Custer ranked 21st in the championship standings, over 100 points behind Reddick in 19th, and just behind Bell in 20th.

But rules are rules, and because of the win, the award is Custer’s to keep.

“I don’t make the rules,” Custer said. “At the end of the day I guess we won it. I don’t know, I’m not the most confident guy out there that’s going to say that I’m better than all of those guys. I know all of us have been pretty competitive this year, and I think we’ve all made big strides. It’s just a matter … I don’t know, we won Kentucky, I don’t know what to tell you, so we’re Rookie of the Year.

“It’s tough to swallow for some people, but it is what it is. I’m going to be proud of it, and I think our team should be proud of it. We’ve shown we can compete and have good finishes.”

Because of the Kentucky victory, Custer jumps up to a three-way tie for 10th as the playoffs begin with Austin Dillon and Aric Almirola. Of the 16 playoff drivers, Custer by far has the worst average finishing position at 19.9, but he’s hoping his experience from three years of playoffs in Xfinity will help even the odds.

“I think we can go in there and prove some people wrong is the biggest thing,” Custer said of his playoff outlook. “We’ve had a lot of peaks and valleys at times this year, but at the same time we need to try and level it out going into these playoffs. I think if we can be consistent and put it all together, put all the pieces together, I think we’ve shown we can compete with anybody.”

Greg Zipadelli, vice president of competition at SHR has seen Custer improve throughout the duration of the season.

“Cole and Mike [Shiplett, crew chief], and the whole team, have really done a great job of improving,” Zipadelli said in a Zoom conference on Monday (Aug. 31). “Each week they’ve taken what I would consider a very solid common sense approach, not a lot of changes, trying to keep things as normal as they can from car to car, from setup to setup, and Cole has done a good job that’s allowed him to just go out and figure out how to drive these cars.”