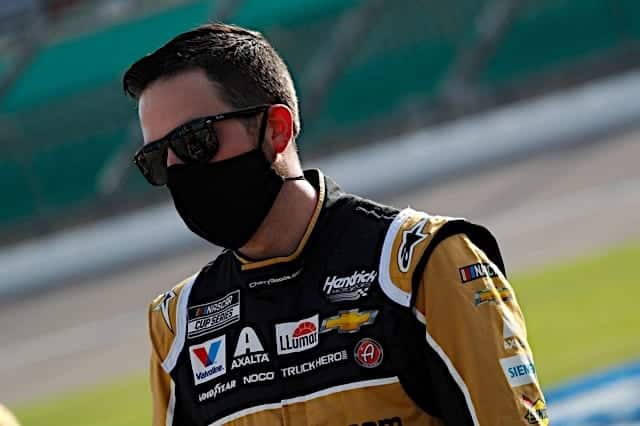 At the start of the 2020 NASCAR Cup Series season, Alex Bowman and the No. 88 Hendrick Motorsports team came out of the gates guns blazing.

But as the season progressed, Bowman was often nowhere to be found, rarely running inside the top 10.

Prior to NASCAR shutting down its season for 10 weeks due to the COVID-19 pandemic, Bowman was consistently fast, though he didn’t get the necessary results, aside from annihilating the competition at Auto Club Speedway, leading 110 of 200 laps en route to the victory. The week prior, the No. 88 car was on pace to finish at worst second — potentially winning — to Ryan Blaney, but with a late-race caution, the Nos. 12 and 88 cars pitted. Bowman finished 14th.

Come May 17, NASCAR resumed its season and nothing seemed to change; the No. 88 was fast. In the first race back at Darlington Raceway, Bowman led 41 laps en route to a runner-up finish behind Kevin Harvick. The next race at Darlington, Bowman said he believes he had a better car but tangled with the Lady in Black, finishing 18th.

“Darlington, we were really fast there the first two races this year,” Bowman said Sept. 3 in the second day of playoff media day. “The first race we finished second, the second race we had a way better racecar and I started racing my competitors instead of the racetrack and hit the fence. That’s on me to not do this time.”

Bowman followed that up by dominating the first half of the Coca-Cola 600, picking up two playoff points and leading a race-high 164 laps. Come the checkered flag, though, the No. 88 dropped to 19th, nearly wrecking on a late-race restart. Four days later, he led 51 additional laps at Charlotte Motor Speedway but finished two laps down in 31st.

Since the two races at Charlotte, it’s been a tale of two seasons for the No. 88 team, leading just 19 laps in 18 races, with just one top-five effort coming in the final race of the regular season last weekend at Daytona International Speedway. In those 18 events, the Phoenix native had an average result of 17.8.

Not good for a team the caliber of Hendrick Motorsports.

“I think for us, the tracks we went to, the tire we were on and the weather really affected us more than we anticipated,” Bowman said. “Our racecar was really unhappy when it got hot and slick during the summer months and the speed was gone. We went to racetracks that we thought we were going to go dominate at, like Homestead [-Miami Speedway], Kansas [Speedway], places that we thought we could be awesome at, especially with how we started the year at Vegas, Charlotte, Fontana and Darlington. And we were terrible, [we] struggled.”

With the eligibility for the playoffs being the way it is, should a team get to victory lane early in the season, it could potentially try something to find that extra speed come the postseason. But Bowman said that wasn’t the case with his team.

“I don’t think we were trying anything,” Bowman added. “If we were, they didn’t tell me. I wish we were. I wish we could point at it and be, ‘Yeah, we were trying stuff, it’s all good, we’ll be fine,’ but we definitely missed it there for two months or so.

“I’m really thankful that we were able to not lose our heads. The team was able to continue working together really well and keep a level head and turn it around.”

Bowman enters the postseason on a streak of consecutive top-10 finishes for the first time in 2020. After starting in the rear in a backup car in the second race of the doubleheader weekend at Dover International Speedway, the No. 88 placed fifth. He followed that up with a seventh-place outing at Daytona last week.

Because the team has two solid finishes in a row, Bowman said he thinks the team is on an upward trajectory, seeded eighth in the playoffs.

That’s a good start “pointed in the right direction.”
I think the playoffs will be a race to the bottom instead of to the top.