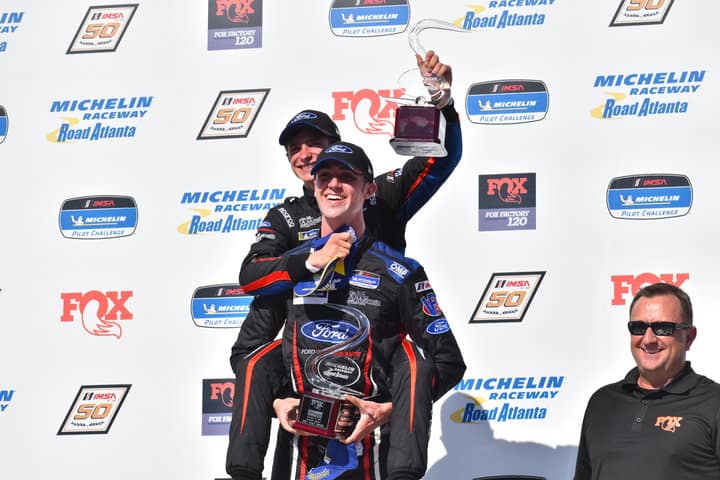 For the IMSA Michelin Pilot Challenge’s Stay Frosty Performance Coolants 240 at Michelin Raceway Road Atlanta, there are currently 33 teams entered in the two classes.  The Stay Frosty Performance Coolants 240 was added to the schedule in order to replace the Tioga Downs 240 at the Glen, which was cancelled due to the COVID-19 pandemic.  While Sebastian Priaulx cannot receive the piggyback ride of triumph from Austin Cindric as depicted above, he’s back to defend his victory from last year.

In Grand Sport, there are 22 cars entered.  Given that this is one of the two four-hour races on the Michelin Pilot Challenge schedule, there are a couple of teams using three-driver lineups.  Riley Motorsports has added Colin Braun to the lineup of their No. 35 Mercedes-AMG GT4.  BGB Motorsports will also run three drivers.

M1 Racing LLC returns to the grid for the first time since Daytona in January.  As compared to then, there have been a numbers of changes.  The team has changed numbers from No. 3 (now being used by Motorsports In Action) to No. 20.  They also have an all-new driver lineup.  Ashley Freiberg, who hasn’t raced in the series since the 2018 BMW Endurance Challenge at Daytona and who won at the track overall in 2015, returns to drive the team’s McLaren 570S GT4.  Since last competing in the series, Freiberg raced in Lamborghini Super Trofeo North America, served as a driver coach and has been working in real estate in Las Vegas.

She’s partnered up with Ryan Nash and Don Yount.  Nash previously raced for eEuroparts.com ROWE Racing in the TCR class before eEuroparts.com was sold.

Chad McCumbee will be back in the PF Racing Ford Mustang GT4, replacing Drew Staveley.  Unlike Daytona, the team is opting for only two drivers.

There are also some question marks.  BimmerWorld Racing’s No. 82 BMW is entered, but only team owner James Clay is listed as driving right now.  Teammate Devin Jones is out for quite a while after the injuries he suffered at VIR.  Luckily, Jones is out of the hospital and recovering at home.  Also, Automatic Racing has also entered their two Aston Martin Vantage GT4s, but have no drivers listed for either one.

The TCR class has 12 teams entered.  As of this writing, there are no driver changes from the previous round at VIR.

The Stay Frosty Performance Coolants 240 is scheduled to go green at 12:15 p.m. Sunday afternoon.  The race will be streamed live on NBC Sports’ TrackPass service.