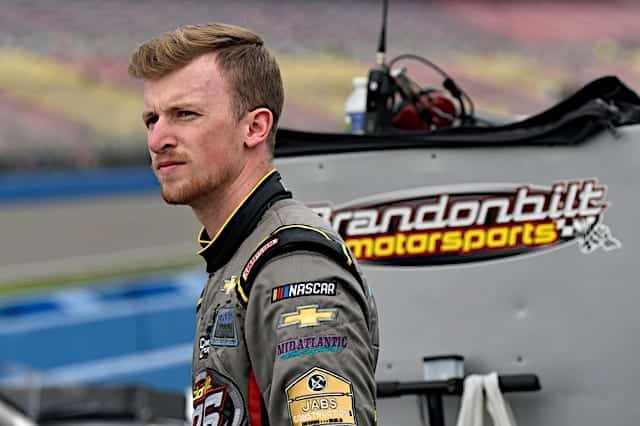 That race began an upward trajectory in Brown’s racing career, running partial seasons in both the Truck Series and the NASCAR Xfinity Series while attending Coastal Carolina University to earn a Bachelor’s degree in communications. He graduated from CCU in the fall of 2018, then focused his efforts onto the race team based out of Fredericksburg, Virginia. He became a team executive at 25 years old.

In 2019, Brown’s first full Xfinity season, he finished 15th in the championship standings, earning his first top-10 finish at Daytona International Speedway in July. The Virginia native finished the year with an average finish just better than 20th (19.7).

This season, though, there’s a different swagger in the No. 68 camp. With just four regular season races remaining, Brown sits on the playoff bubble in 12th, 32 points ahead of Jeremy Clements. He’s also lowered his average finishing position by nearly three spots, currently at 16.9 with four top-10 finishes.

Although he wants to make the playoffs, it’s been a solid season for Brown.

“I would say it’s successful, with the fact of our initial goals for that we start for the 2020 season,” Brown recently told Frontstretch of his 2020 season. “We set the goal out to go out to run competitive, max out our equipment and try to reach the checkered flag. We’ve been able to do that, keeping the mistakes minimal besides the times of a mechanical failure and getting [wrecked].

“It’s reached the crunch time of trying to be in the playoffs, and it’s one of those things where we needed to have another team meeting [after the Daytona road course] about attitude and making sure everybody still knows that we can really be in the playoffs as long as we don’t beat ourselves.”

Prior to the 2019 season, Brown had 20 Xfinity starts over three seasons. Over the years, the team, led by Brandon’s father Jerry Brown, has made changes internally and atop the pit box to better the team.

For 2020, BMS hired veteran crew chief Doug Randolph, who has been around the top three national touring series as a crew chief for 20 years. He replaced Adam Brenner, who was Brown’s crew chief since his late model days.

Those internal changes have elevated the team to be a competitive 10th- to 15th-place team on a weekly basis.

“It’s just the personnel, the leadership that’s been brought into this team,” Brown said. “It’s been a combination of personnel and we moved over to the ECR-bought motors. It’s not quite their lease program, but it’s still better than what we had been running before. It’s a little bit of that and picking up some older RCR cars to run this year has been helpful too, so that our cars aren’t dinosaurs.”

Brown says the team is primarily running off the weekly race purse, but has had a primary sponsor in 14 of 22 races this year. However, he doesn’t believe the team is necessarily underfunded, just “under-sponsored.”

Because the No. 68 Chevrolet is consistently a threat for top 10s, Brown believes the team has demonstrated some of its potential.

“I think we’ve proved our worth in the garage, and I think we’ve proved to ourselves as a race team that, even with the little bit that we do get, we’re running competitive and able to make a stand. Even if we can just make the playoffs, that’s a good win in our books.”

But overall, the driver believes the team is being shown the respect it deserves, making him more assertive at the track.

“Every time I walk into the garage, I feel like people finally kind of recognize that the [No.] 68 car is there, we’re there to race and we’re there to be very competitive,” Brown stated. “Especially when – I know this sounds silly – you’re parked on the front end of the garage with the big guys: JR Motorsports, [Team] Penske, Stewart-Haas [Racing], Richard Childress Racing, all of those guys, it shows my guys to say, ‘OK, these are the big guys, this is what they do, this is their team.’

“For me, it’s one of those feelings, where I feel like I’ve earned this spot. … Being this far into the season, it really helps because now you’re able to establish relationships with other drivers that run up there and you’re able to bounce information that could be helpful to you and them when you go out to these races.”

Meanwhile, Brown’s father Jerry – who Brown announced last week his father beat his battle with cancer after finding out a swollen lymph node he had in early April was cancerous – isn’t sure the team gets the credit it deserves.

“Probably one of the biggest things we’re fighting right now is the top 11 teams don’t really – they consider us more of a 15th- to 20th-place car,” Jerry said. “It’s the same way with the cars that are 15th on back. Hopefully this will help us gain a little more respect and prove to people we belong where we are.”

Before the season-opening race at Daytona nearly seven months ago, Brown thought the team had a solid chance of making the postseason. Because of that, he wouldn’t necessarily consider 2020 to be overachieving.

But through 22 races, the No. 68 team has done its job, scoring stage points and achieving respectable finishes. On a personal note, Brown thrives on the pressure of running for a postseason berth.

Brown said, “I love it. I love this. It’s one of those things where it’s like, ‘Yes, the pressure is there.’ It makes you want to work hard and be better than everyone else because now I’ve got something to prove. Realistically, looking at my team, if we’re not running on a superspeedway or a road course, it’s hard to say that Brandonbilt Motorsports is going to go out there and win a race this year with what we have. That’s not super realistic. … So having this pressure almost gives it the feeling of a win if you succeed.”

Just racing around the playoff bubble gives the No. 68 team additional television exposure. While electing not to pit during a mid-race caution in the first race of the Dover International Speedway doubleheader two weeks ago, Brown led four laps. That allowed his sponsors to be shown on TV.

For a small team, any bit of exposure helps, so racing on the bubble has its positives.

“If the [regular] season ended right now, I’m in the playoffs,” Brown said. “You kind of walk around with that confidence, heads are high because when it’s five races into a season and you’re a playoff driver it’s like, ‘Well, are you actually or are you lucking out because people are wrecking or misfortune?’ But when you’re this far into the season and they’re talking about you, you’re a playoff contender, it makes it easier to go back to your partners and say, ‘Hey, we’re getting talked about, this is giving you airtime which is great.’

“It’s one of those things that can be really nerve wracking if you just sit there and think about it, dwell on it. Honestly, it doesn’t make a whole lot of sense to do that because right now the only way [we’re] going to miss the playoffs is if we beat ourselves.”

For that reason, should Clements happen to make up 32 points on Brown over the final four races of the regular season (races at Darlington Raceway, two at Richmond Raceway and Bristol Motor Speedway), it would be disheartening.

Why? The team would have beaten itself.

“It’s one of those things where the ball is in our court, and we don’t want to drop it.” Brown said. “If we don’t make the playoffs, that’s where that disappointing feeling would come in because then I don’t get that win and the pressure was for nothing.”

Regardless of what happens, Jerry is proud of the team’s effort, which is splitting time between its race shop in Fredericksburg and Mooresville, N.C. this season, with a second race shop for the first time.

“We’re running way ahead of where we should be running, so I couldn’t be any more proud,” Jerry added. “We only have three guys in the shop building the cars in Virginia and two in North Carolina. I’m very proud.”

But what happens if Brown gets into the playoffs as the 12th seed?

He believes some of his best tracks are in the seven playoff races, so maybe a run to the Championship 4 is possible.

“If we get to the playoffs, I think we’re going to have a real shot at it,” Brown stated. “You can’t count your chickens before [they] hatch, but I’m working on partnerships to help get us some ideal equipment for the playoffs, which would really, really help. I think once we make it in, the pressure of making it is off and then it would be all about capitalizing and I know that’s what my team can do.”