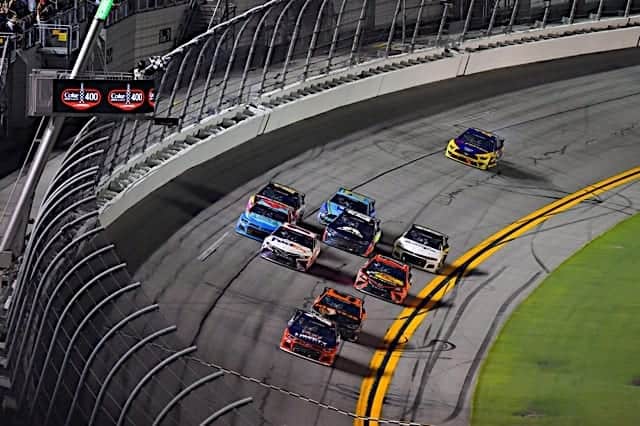 On the surface, it’s a bit of a question mark as to why a driver who won in his fourth-ever NASCAR national series start, who went on to win six more times in the Gander RV & Outdoors Truck Series that season (only to fall a blown engine short of a championship) and who had a championship-winning rookie season in the Xfinity Series took almost three full years in Cup to win.

But when you look into the minutiae for a second, it becomes pretty clear (and somewhat elementary): it’s damn hard to win a race at the top level of stock car racing.

Drivers, tracks, cars, chassis, engineering, manufacturing, rules and regulations, schedules, sponsorship, they all evolve at an ever-changing rate, and it’s hard to keep up.

Many drivers, especially in this specific iteration of car, have emphasized the lack of impact a concrete skill set really has behind the wheel and that the technology driven aspects have only been exacerbated in recent years. TL;DR, it takes it out of the drivers hands more.

Sure, the competition had (and continues to have) a leg up on the No. 24 bunch, and yes, the win wasn’t on a traditional oval and based on raw speed. But a win is a win, no matter how you slice it. It carries the same weight and points as the Daytona 500 or a mid-summer race that’s at least 100 miles too long at Texas Motor Speedway.

But once Byron took the checkered flag, one would assume a proverbial monkey definitely had to be off his back, right?

His contract extension with HMS was announced in the week following but was actually signed almost a month prior during the Michigan International Speedway doubleheader weekend. So he had contractual stability already and was in the middle of a fight for the final playoff spot with a seven-time champion, teammate and driver he idolized growing up.

That’s a lot of pressure and a lot to deal with. Sound familiar? It may.

Chase Elliott took 98 races to Byron’s 97 to visit victory lane in the Cup Series. Elliott also won the Xfinity title in his rookie season (scoring three wins) and stepped into some big shoes. Ironically, Elliott wasn’t able to being the No. 24 to the winner’s circle, as his first win at Watkins Glen International was in the No. 9.

Elliott was also under an immense amount of pressure, whether he admitted it at the time or not. Being the sport’s most popular driver, the son of a 16-time most popular driver award winner (and champion) and being groomed to take over one of the series’ most iconic organizations, all at the ripe age of 21.

It’s a lot. But Elliott broke through at the Glen in summer 2018 and had two more wins that season. The next, he rattled off three more victories and already has two to his name this season.

Byron’s trajectory could follow a similar path to Elliott’s, with the No. 24 team clearly hitting its stride at the right time and returning to tracks for not only the second time this season, but also for the fourth, fifth and sixth times at some venues in his career.

“It’s been a long time coming for this win in the Cup Series,” Byron said post-Daytona. “I was thinking the other day before this race actually just how long it’s actually been since I’ve won a race. I’ve really been wanting to win and have that feeling again of adrenaline.”

It may be short-lived, because knowing Knaus, the win is in the rear-view mirror and the playoffs are out the windshield now. Regardless, Byron knows he can win in Cup now. I’m not saying he’s going to turn into Chase Elliott 2.0, but if he continues his positive course, there’s no reason why Byron can’t break out for a few more wins.

Heck, maybe steal a Championship 4 spot. I wouldn’t bet on it, but crazier things have happened.