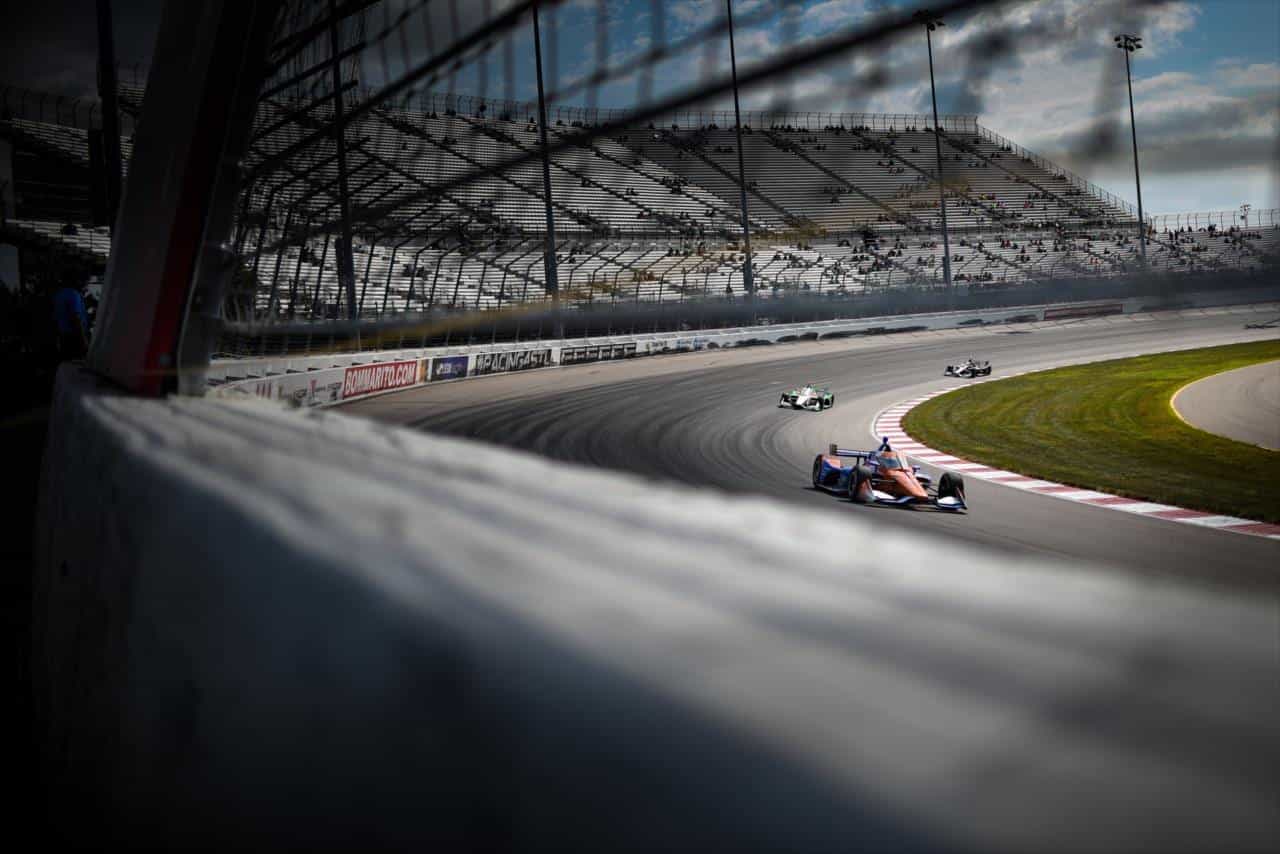 September could be a questionable month for the 2020 IndyCar season. There are no races officially scheduled, but rumor has it that the postponed Mid-Ohio doubleheader could be coming back during the Sept. 13 weekend.

Whether or not IndyCar races this month, we’ve had the Indy 500, and the end of the season is in sight. It’s time for contending drivers to defend their lead and for the unluckier ones to mount a strong push toward the top. Who is struggling, and who is thriving?

Here are Frontstretch’s IndyCar power rankings for September 2020. Let us know how you would rank the full-time NTT IndyCar Series teams in the comments.

Scott Dixon is far and away the NTT IndyCar Series’ best driver this year. His single bad race—a 12th place at the second Road America event—was the kind of finish that lesser drivers would give an arm and a leg for. It’s hard to imagine a stronger driver, and his championship lead of nearly 100 points has shown just what consistency can do for an Astor Cup run.

It’s hard to overstate how impressive Pato O’Ward has been this season. The No. 5 Arrow McLaren SP driver has made the most of his equipment, and while his showings at Texas Motor Speedway and the second event at Iowa Speedway weren’t stunning, they were still pretty great. O’Ward has proved himself to be one of the young guns fully capable of usurping the veterans. It’s only a matter of time before he scores his first win.

2nd feels good and all but…. we are hungrier than ever for that first victory in @IndyCar #TogetherWherever @ArrowMcLarenSP

Like his Team Penske compatriots, Josef Newgarden’s 2020 season has been one of ups and downs. His two wins have made him the only driver other than Scott Dixon to take home multiple victories, but he, like Dixon, is banking on consistency. Newgarden isn’t making any crazy, dangerous moves when he’s settled in for a solid points finish, but he knows how to manage both his own car as well as those competing against him—earning him a solid third place in the power rankings this month.

Colton Herta is easily the best Andretti-affiliated driver this season. He’s not only had better luck than some of his competitors, but he’s been consistently impressive (with the exception of an Iowa weekend better left forgotten). Like O’Ward, he’s one of the most promising new talents filtering up through the series, and his ability to outdrive his more experienced teammates has been genuinely remarkable. As an added bonus, he has some of the most colorful in-race commentary on the grid.

After being unable to start the first race of the season due to mechanical problems, Takuma Sato has rebounded in dramatic fashion. His run at the Indianapolis 500 says it all: he didn’t look to be a factor until suddenly he was. Sato is a master of the quiet attack, racking up positions through nondescript passes and quick pit stops, but he also hasn’t been afraid to get aggressive when the time comes. Unfortunately, as seen in the second Gateway race, he can also still crash out.

No one knows what to expect from rookie Rinus VeeKay, and that seems to serve the Dutch driver just fine. His 13th place in the overall points standings doesn’t reflect a season of daring passes, complex strategies, and raw speed. The only Chevy-powered driver to make it into the Fast Nine at the Indy 500, Veekay was having a solid run at the difficult track before he slid in his pit stall. He certainly needs to work on refining his skills, but the No. 21 Ed Carpenter Racing driver obviously has talent.

Started P18 – had some amazing battles – finished P4. Close to a perfect race, but eager for my first podium… ? pic.twitter.com/9KeHAHkamn

2020 has been a year of quiet gains for Marcus Ericsson. Despite the pressure of having Dixon as his benchmark, Ericsson has performed admirably—especially on road courses. That said, a fourth place at Gateway shows that he’s been making oval gains as well. He’s settled very comfortably into his own and has managed consistency in a series composed of varying disciplines.

Simon Pagenaud‘s season may have peaked with his win at Iowa after starting in dead last, but the French driver has still put together a resume to feel good about in the midst of sheer chaos. He’s still sitting sixth in the overall standings, and his two drives at Iowa might have been the performances of the year. It’s not likely Pagenaud will be able to salvage much from 2020, but he still has a doubleheader at the Indianapolis Motor Speedway road course to revitalize him.

Santino Ferrucci has had it rough. During his best races, he’s had pit stop problems that cost him several crucial track positions. He’s been able to secure top 10s despite his bad luck, and he’s one of the drivers unafraid of executing a risky pass. While he still has some growing to do—some of those risky passes are ones that he probably shouldn’t have gone for, especially since he’s skilled at sticking close to his competition—he has the potential to mount a serious championship challenge in the future.

Felix Rosenqvist‘s win at Road America has been the bright spot in an otherwise mediocre season. That, along with his finishes at Gateway, are the only times he’s scored top 10s—and that’s not a promising sign when one of your teammates is leading the championship while the other is racking up a solid run in his first season with the team. Rosenqvist is a good driver when he has the chance to show it; he just needs to remember that the race isn’t won until the final lap, and it takes a lot of work to get there.

Any luck Alexander Rossi has had this season has been bad. From being relegated to the back of the field at the Indy 500 to being caught up in an absurd first-lap crash a few days later, 2020 has not been kind to the Californian—and it seems to be taking its toll. Yes, Rossi can be a damn good driver when he’s angry, but letting a full season of anger rip put him into the wall at the 500. At this point, Rossi would be better served focusing on making the most he can out of the rest of the season instead of trying to match his 2019 success.

If Will Power hasn’t finished on the podium in 2020, he hasn’t finished well at all. Despite those bright points, Power has also let his season start playing on him—his angry driving at the second Road America event knocked several drivers out of the race, and his post-race interviews tend to focus on the lows rather than the highs. It hasn’t all been Power’s fault, but his drastic responses to bad luck hasn’t helped him this year.

Jack Harvey may be one of the most underrated drivers of the 2020 IndyCar season. Despite it being both his and Meyer Shank Racing’s first full-time effort in the series, he sits 14th in the championship and has done a great job driving for consistency and not necessarily position. Right now, he and his team will benefit from running full, clean races, and Harvey has brought the car home in a respectable fashion at almost every race. As he and MSR find their footing, they’ll be a duo to be reckoned with.

Graham Rahal has had moments of brilliance that have also been overshadowed by moments of bad luck. At Gateway, the No. 15 Rahal Letterman Lanigan racing machine sucked up a napkin and overheated, throwing off the car for the whole weekend. At Road America, he was taken out by an angry Power. But when he’s able to push the car to its fullest, he’s done well to push into the top 10. The season has been one of missed opportunities and poor circumstances, not driver error.

Ryan Hunter-Reay hasn’t been having a particularly impressive season. He’s had a few good races—the first events at Road America and Gateway, for example—but he’s been more likely to finish mid-pack with a downward trend. That’s not necessarily an indictment of his driving abilities, because Andretti Autosport has struggled as a whole, but his performances aren’t enough to secure him a better slot in the power rankings.

Conor Daly has been driving for two teams this year—Carlin at all ovals except for the Indy 500, Ed Carpenter Racing at everything else—and he’s had a mostly okay time of it. His best performances have been with Carlin, a team that has secured him a top 10 in all but one race. He scored his first pole position at Iowa and has made a solid showing in his first full season back in IndyCar, which is something he can be proud of. He gets some slack because his biggest struggle is consistency, which is hard to achieve running for two different teams, but there’s still work to be done.

The Arrow McLaren SP team looked promising when Oliver Askew launched out of the gate with a top 10 at Texas Motor Speedway, but the Floridian hasn’t quite matched the promise of his teammate O’Ward. Texas and Iowa have seen his best performances, but the rest of the season has been marred by poor luck and mediocre finishes. For a driver in his rookie year, he’s done a lot of work to be proud of, but he hasn’t quite lived up to his hype.

Alex Palou’s great weekend at Road America has been largely overshadowed by mistakes on ovals. He was the first driver to crash at the season opener, and he pulled out of the starting lineup prematurely at Gateway Race 1, leading to a six car pileup. Palou is by no means a bad driver—his third place at Road America shows what he can do when he’s comfortable—but he very much is a rookie with a lot left to learn.

A bit disappointed that with the speed we had all weekends we couldn’t finish with a good result, but once we put everything together… ?

Charlie Kimball has had a quiet 2020 season in the No. 4 AJ Foyt Racing machine. With one top 10 to his name and a series of mostly okay finishes, Kimball has kept his nose out of trouble and his head in the game. It won’t be his best year in the IndyCar series, but in his first year with a new team and paired alongside the rotating cast of the No. 14, Kimball has been the team’s dependable rock.

While his pole position at the Indy 500 looked to turn things around, Marco Andretti has had a mostly forgettable 2020 season, epitomized by the fact that he was passed before the first turn at IMS. He’s been caught up in wrecks or plagued with problems on his bad days, and he’s just been plainly uncompetitive on his good days. It’s been a fairly disappointing run for the driver who shares a last name with his team, and it doesn’t look like it’ll be getting better before the finale.

Zach Veach has slipped quickly downhill after his fourth place at Texas Motor Speedway, which doesn’t bode well for his final contract year at Andretti Autosport. He solidified his place at the rear of the grid after crashing into the multi-car pileup at Gateway that he likely could have avoided, and it seems like it may be too late for him to turn his 2020 IndyCar season around.