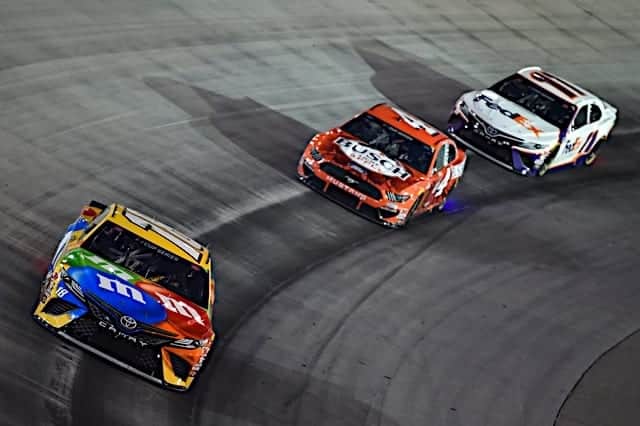 Twenty-six races in the NASCAR Cup Series regular season. A driver tries all he can during the first 25 but isn’t able to grab a victory. The last race of the regular season provides one last chance for a driver to use all of his skills to get into the tournament and have a shot at a title.

But wait: we’re going to make that last race a superspeedway run so that your fate is ripped from your skilled hands and placed in the winds of fate.

Last Saturday’s race from Daytona International Speedway has received rave reviews for the edge-of-your-seat excitement that had everyone riveted to their TVs to find out the ultimate outcome. The problem was, if you look at it through objective glasses, the vast majority of the race was anything but exciting.

The first stage was the best of the race. Drivers mixed it up for the majority of the stage and the drivers who really needed to be cautious to keep their hopes alive seemed to do anything but. With that stage in the books, things seemed poised for a thrilling event, but it didn’t play out that way.

The second stage was a parade of Rose Bowl proportions with everything but bands and floats. It was a single-file line for most of the stage, and then a fuel mileage race broke out. We were subjected to 30-something laps of a car running three fourths of their throttle leading a line while another line caught them from a straightaway behind. Once the line caught up, nothing happened.

The final stage was more of the same — drivers couldn’t do much of anything, mired in position unless they could get help. Then everyone got excited because the end was nigh and everyone started pushing and shoving. A bad decision and a misplaced run took out half of the field. In the end they tore up a few more cars on the last lap, but the race was already decided. Unfortunately, the playoff excitement went out the window when Jimmie Johnson‘s car was wadded up in the second big wreck.

As much as we often hear that fans don’t want to see wrecks, that simply isn’t true. Races with many wrecks and/or big wrecks always get high approval ratings. Were it not for the massive carnage at the end on Saturday, the race would have probably been poo-poo’d for its boring results.

But in the end, whether you liked it or not, the fact of having a total crapshoot race as the event that seals the fate of all non-playoff drivers is simply unfair.

Yes, there are always three superspeedway races during the regular season. However, if a driver has a bad result because of a huge wreck in one, they can still make up for it. When it is the cut-off race, that option is removed.

Unfortunately for those of us that want a driver’s skill to play a big factor in their success in making the playoffs,  we are not going to get to see that for years to come. A 90% approval rating of the race from those who responded to multiple polls means that the decision-makers are most likely going to vote for chaos over skill in cut-off races.

You have Bristol Motor Speedway, the Charlotte Motor Speedway ROVAL and Martinsville Speedway this year. There’s a decent chance for chaos at each of those. Get ready for more torn-up racecars and crushed championship dreams.

I’m sorry but I really can’t find a reason to care about which driver 15th, 16th and 17th in the standings makes the chase/playoffs. None of them have had championship-worthy seasons and most likely will be out before the round of 8 unless they go on some kind of late season winning streak (HIGHLY improbable). So what fans should be saying is who cares what track they run the last race because who cares which of these bubble drivers make it in. Yes, it is hard not to get caught up the over-hyped fake drama watching the drivers points go up and down, but is that really what made us want to watch races to begin with?

Judging from the ratings, not a lot of people card about the end of the ‘regular season’ period.

Watching the race to the bottom will be more exciting than the race to the top. How will it happen, perhaps an untimely caution, caught up in someone’s wreck, a bad pit stop, a flat tire, a penalty or just run out of talent? A physical confrontation at the end will be the cherry on top.
You all can’t be winners!