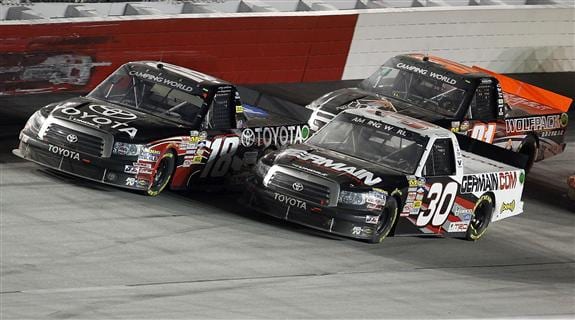 For the first time since 2011, the Gander RV & Outdoors Truck Series returns to Darlington Raceway to run the penultimate race of the 2020 regular season on Sunday (Sept. 6).

The series first visited Darlington in 2001, a race that the late Bobby Hamilton dominated by leading 125 of the rain-shortened 135 laps. It continued racing at the track through the 2004 season before Darlington was dropped from the schedule.

In 2010, the series returned to Darlington after five years away, replacing the removed Milwaukee Mile. Of course, the racing didn’t disappoint. Despite being stalked by Timothy Peters in the closing laps, Todd Bodine navigated his way easily around the lapped truck of David Starr and took the victory. Ron Hornaday Jr., Johnny Sauter and Austin Dillon rounded out that year’s top five.

But that return was short-lived; it ended after just two seasons. According to a late-2011 story from SC Now Morning News track president Chris Browning said it was Darlington’s decision to not have the race.

“We talked about several different options,” Browning said. “They have the big picture to look after for their scheduling. We have a little bit smaller picture.”

The story went on to say that a race weekend in late September or early October would be an ideal spot for a Truck Series race weekend.

“It’s better from a weather standpoint, and the kids would be back in school,” Browning said. “And that part of the schedule going down to the wire would be a good set up for us. In a perfect world, that’s where we would be.”

Fast forward to 2020, and it took a global pandemic to get Darlington back on the Truck Series schedule.

For much of the field, it’s another weekend full of unknowns as the series continues to race without practice or qualifying. In fact, only four drivers in the field (Norm Benning, Jennifer Jo Cobb, Matt Crafton and Sauter) have any prior experience at the 1.366-mile oval. That means, for the most part, it will be a level playing field coming into Sunday’s race.

I’m not even going to begin to try to guess who might find their way to victory lane this weekend, but it seems logical that those who have experience will have a bit of an upper hand. But with that said, Darlington has long been known as the track “too tough to tame” and could prove to be just as much of a wildcard as a superspeedway race.

? HARDCORE THROWBACK ?: @BayleyCurrey will drive this No. 44 "Hardcore Fish & Game" #Silverado for @NieceMotorsport at @TooToughToTame.

I’ve always wanted to run one of my dad’s old paint schemes for a throwback and we are finally going to do it this weekend! In 2003 dad’s No.5 truck would race with a neon border around the number. Looking forward to finally having the trucks back at Darlington! pic.twitter.com/iqotIYyMAZ

We are excited to unveil our @TooToughToTame throwback paint scheme that pays tribute to the original driver of the Friesen #52! #stanfriesen catch the full video here: https://t.co/8O7ogM2gIg pic.twitter.com/9Pzsap4pPj

Beyond excited to share this throwback for @TooToughToTame this weekend! @Freedomwarranty has extended their partnership thru 2021 and we have a @Team_Onion throwback paint scheme! The Onion has been a friend and mentor this throwback goes to his win at Darlington! ? in BIO pic.twitter.com/0l8nQ0965T