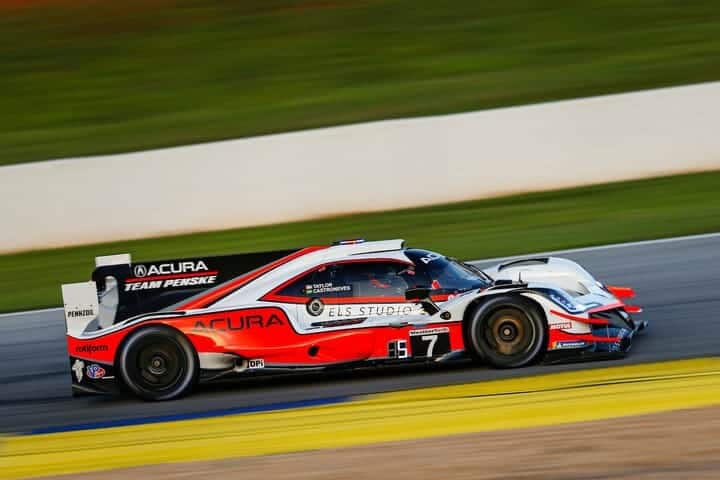 Qualifying for the TireRack.com Grand Prix was incredibly competitive Friday evening (Sep. 4).  Once the dust cleared and sun set, Acura Team Penske’s Helio Castroneves claimed the pole for the six-hour race with a lap at 133.151 mph.  He was overjoyed with his effort given the competition

“I tell you what, it’s on the line, everything,” Castroneves said afterwards.  “You have great competitors and great manufacturers, sometimes you have to push it to the limit.  Every time you go out there, we have a great sister car, [so] you have to push it the limit.  We have an amazing quality of drivers, amazing quality team. And as I said, the competition.  For me, it’s great because every time you achieve something great, fun, especially what we love to do, it doesn’t matter the age, every time you’re doing something you love, it’s always fun.”

It is Castroneves’ second overall pole at Michelin Raceway Road Atlanta.  Three years ago, Castroneves won the pole for Petit Le Mans in an ORECA 07-Gibson entered by Team Penske ahead of the launch of the Acura ARX-05 project.

Castroneves’ lap is not a track record.  Nasr’s pole from last year’s Motul Petit Le Mans was two-tenths of a second faster.  Qualifying in general was closer this year.  Castroneves’ lap was less than six-hundredths of a second faster than Action Express Racing’s Felipe Nasr, whom Castroneves overtook for the top spot with a couple of minutes remaining in the session.  Dane Cameron in the second Acura will start third with Mazda Motorsports’ Tristan Nunez alongside.  Harry Tincknell in the second Mazda will start fifth.  There were less than three-tenths of a second separating the top five.

In LMP2, Era Motorsport’s Patrick Kelly claimed the class pole with his first lap at speed.  He then improved that to a lap at 126.632 mph, good for ninth on the grid.

The session was far from clean.  Nasr went off-course exiting Turn 1 and nearly hit the wall.  Tincknell took a trip into the grass and brought some vegetation onto the course.  In LMP2, Era Motorsport’s Dwight Merriman spun in Turn 5 and went across the gravel trap.  He didn’t hit anything, but the undertray of the team’s ORECA 07-Gibson was damaged, forcing an early end to their session.

The GT Le Mans session might be the closest collective session in recent memory.  The entire six-car class was separated by less than two-tenths of a second.

At the end of 15 minutes, Porsche GT Team’s Nick Tandy ended up with the pole with a lap at 120.052 mph.  This lap was 14-thousandths of a second faster than Corvette Racing’s Antonio Garcia.  Teammate Tommy Milner was third.  Laurens Vanthoor in the second Porsche was fourth, while BMW Team RLL’s Connor de Phillippi was fifth.  These drivers were separated by less than a 12th of a second.

AVS Vasser Sullivan’s excellent qualifying form continued as Frankie Montecalvo earned his second pole of the year with a lap at 114.648 mph.  Montecalvo was a tenth and a half of a second faster than the Lamborghini of Paul Miller Racing’s Madison Snow.  Wright Motorsports’ Jan Heylen will start third in class, followed by Meyer Shank Racing with Curb-Agajanian’s Shinya Michimi.  GRT Grasser Racing Team’s Steijn Schothorst, who was quickest in the second practice session, will start fifth

The TireRack.com Grand Prix is scheduled to go green at 11:35 a.m. Saturday morning.  Live coverage of the race will begin at 11:30 a.m. ET on NBCSN, switch to NBCSports.com, then come back to NBCSN for the finish.  For those of you who subscribe to NBC Sports’ TrackPass, the whole race will be streamed live on there as well.