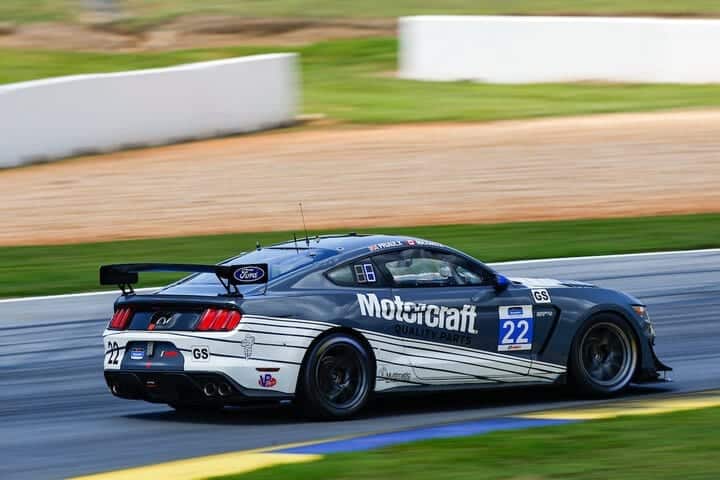 Early on, the man to beat on track was Motorsports In Action’s Corey Lewis.  Lewis was fastest early in the session before coming into the pits for some attention from his crew, and to give teammate Sheena Monk a chance to practice.  Here, trouble erupted.

(1/2) We are working hard to get the #3 McLaren going for FP2. Unfortunately, the vent jug failed and poured gas into the hot engine bay which lead to the fire. Patrick, who was holding the jug, got away with minor blisters on his hands. pic.twitter.com/eGOgPjCpWl

Motorsports In Action happened to be pitted next to Turner Motorsport.  Bill Auberlen, who was out of his BMW at the time, captured the incident and posted this clip of the fire to his Instagram.

As you can see in the video, Monk was able to get out of the car and run away from the fire without injury.  It looked like the fire could have ended Motorsport In Action’s weekend.  That was not the case, but it did end their session.

During the second half of the session, Lewis’ time was eclipsed by KohR Motorsports’ Kyle Marcelli.  Marcelli lapped the 2.54-mile road course in his Aston Martin Vantage GT4 at an average of 104.619 mph.  This lap was half a tenth of a second faster than the Chevrolet Camaro GT4.R of Rebel Rock Racing’s Robin Liddell.  Lewis’ time held up to be third quickest in the session.  The Archangel Motorsports Porsche of Trent Hindman was fourth, while Murillo Racing’s Eric Foss was fifth.

Automatic Racing’s Kris Wilson was sixth in his Aston Martin, followed by BGB Motorsports’ Jan Heylen.  Riley Motorsports’ Dylan Murry was eighth in his Mercedes, while Priaulx and PF Racing’s Chad McCumbee rounded out the top 10.

TCR saw Bryan Herta Autosport’s Gabby Chaves top the class with a lap at 102.961 mph, good for 18th overall.  Chaves’ lap was nearly a half-second faster than LA Honda World Racing’s Mat Pombo.  Teammates Mark Wilkins and Michael Lewis were third and fourth in their Hyundais, while Fast MD Racing’s James Vance was fifth in the best of the Audis.

After a terrible race at VIR, Fast MD Racing likely wanted a clean weekend.  They didn’t get that on Friday as Vance slid into the gravel and caused a red flag.  The car wasn’t significantly hurt, but it was beached and that ended their session early.

In the afternoon session, Priaulx turned in his quick lap for the day slightly past the halfway point of the session.  This lap was only a mere one-hundredth of a second faster than Marcelli.  Winward Racing teammates Russell Ward and Philip Ellis were third and fourth in their Mercedes-AMG GT4s, while McCumbee was fifth.

Heylen was sixth quickest in his Porsche, followed by Colin Braun in the Riley Motorsports Mercedes.  Liddell was eighth, while CarBahn Motorsports with Peregrine Racing’s Jeff Westphal was ninth.  Greg Liefooghe, who is in the BimmerWorld Racing No. 82 in relief of the injured Devin Jones, was 10th fastest.

Motorsport In Action was able to get their McLaren 570S GT4 cleaned up and repaired after the fire.  Monk, who didn’t get out in the opening session before the fire, got out and ran 27 laps during the session in an attempt to shake the car down and get some track time.

Bryan Herta Autosport’s No. 33 Hyundai Veloster N TCR was fastest once again in the second session, this time with Ryan Norman in the driver’s seat.  Norman turned in a lap at 102.872 mph, good for 19th overall.  This lap was once again nearly a half-second faster than Pombo, but eight-hundredths of a second slower than what Chaves turned in earlier in the day.  The Fast MD Racing Audi showed no ill effects from the trip to the gravel in the opening session as Vance was third quickest in the session.  Mason Filippi was fourth in his Hyundai, while JDC-Miller MotorSports’ Stephen Simpson was fifth.

If you look at the result sheets, you’ll see that LA Honda World Racing’s No. 37 Honda Civic Type-R TCR did not venture onto the track in either session.  There’s a reason for that.

Sadly, I won't be competing in this weekend's #TCR race @RoadAtlanta. Late news & little time in between races, we weren’t able to find another co-driver in time. Luckily we have some time off before @Mid_Ohio to get it sorted. Still going to Road Atlanta with gear in hand!

Blackstock is still at Michelin Raceway Road Atlanta this weekend because he is competing in the two Lamborghini Super Trofeo North America events on the undercard.

Regardless, it will be a 32-car field that will do battle this weekend.  Qualifying is next up and will be held at 6:15 p.m. Saturday after the completion of the TireRack.com Grand Prix.  We’ll have a recap for you tomorrow evening here at Frontstretch.