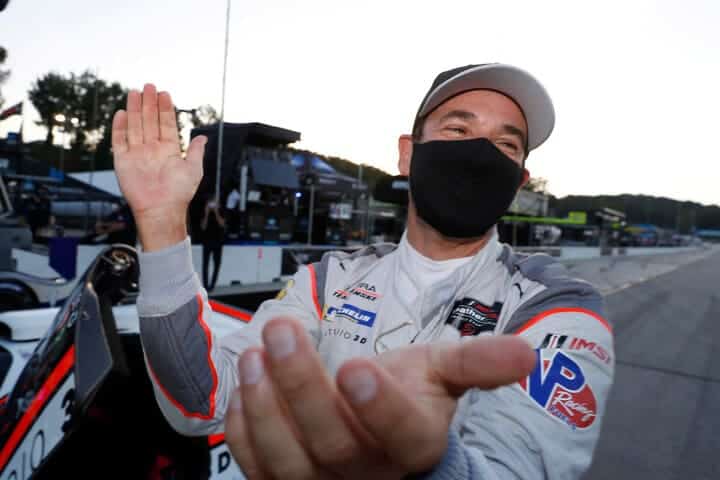 Acura Team Penske’s Helio Castroneves and Ricky Taylor recovered from multiple early penalties to win the TireRack.com Grand Prix Saturday (Sept. 5) at Michelin Raceway Road Atlanta.  It is the second win of the season for the duo as they continued their strong 2020 IMSA WeatherTech Sports Car championship season.

“Great team effort today, I have to say,” Castroneves said after the race.  “Once we were with the pack, we knew we had the pace.  Because we were so far back, we were improving the car because we were pushing as hard as we could.  That made for a great race.  You’ve got to have a little luck.  I’m glad it’s starting to turn to us and hopefully, we can keep going.”

Castroneves started from the pole, but the action started immediately at Road Atlanta.  On the initial start of the race, Dane Cameron was pinched onto the curb in turn 12 by Action Express Racing’s Felipe Nasr.  That caused Cameron to spin at the start-finish line in front of nearly the entire field.  No one hit Cameron but JDC-Miller MotorSports’ Matheus Leist and Era Motorsport’s Dwight Merriman collided, resulting in Merriman spinning out.

Both Leist and Merriman ended up with broken rear suspension pieces that resulted in long stays in the garage. However, both were able to continue.  Nasr was judged by IMSA officials to be responsible for the crash and had to serve a drive-through penalty.

Castroneves led handily until contact between BMW Team RLL’s Connor de Phillippi and Mazda Motorsports’ Harry Tincknell led to a mirror falling off the BMW.  That brought out the second full course caution of the race and the first round of stops.  Castroneves got out first, but committed two violations in the process.  First, he got caught speeding in the pit lane, which resulted in a drive-through penalty once the race got back under green.  Castroneves attributed the problem to his pit lane speed limiter not activating in second gear.

But that’s not all. In addition, Castroneves ran the red light at the end of the pit lane, requiring a separate stop under green for a stop and 60-second hold.  As a result, Castroneves went from leading the race to nearly two laps down.

Wayne Taylor Racing’s Renger van der Zande moved into the overall lead as a result of Castroneves’ penalties.  Van der Zande and teammate Ryan Briscoe controlled most of the first half of the race.  Cameron, by virtue of a short pit stop during the second caution, worked back up to second and was able to keep pace with the Konica Minolta-sponsored Cadillac.

During a round of stops, Juan Pablo Montoya was able to jump over Briscoe into the lead.  The second half of the race saw Montoya and Cameron do battle with Mazda Motorsports’ No. 77 driven by Olivier Pla, Tristan Nunez and Oliver Jarvis.  The Mazda seemed to have the better of the Acuras, but brake issues derailed their day late.  In addition, by use of a wave-around during a full course caution in the second hour, the No. 7 Acura of Castroneves and Ricky Taylor was back on the lead lap and in contention as well.

During the final round of stops, there was contact between Montoya and Wayne Taylor Racing’s Ryan Briscoe entering the pits.  The two drivers were nose-to-tail and slowing to the 60 kph speed limit when Montoya suddenly slowed even more.  That resulted in Briscoe hitting the back of Montoya, damaging both cars.

Montoya required rear end bodywork while Briscoe resumed with minimal repairs.  However, IMSA determined that Briscoe was responsible for the incident and forced him to serve a drive-through penalty.  It dropped the No. 10 of Briscoe and van der Zande down to seventh, dropping them out of contention.  Team owner Wayne Taylor was convinced that Montoya had brake-checked Briscoe and stated as such in an interview with NBCSN.

The pit lane contact put Castroneves back into the overall lead.  Tincknell was seven seconds behind in second, but faster.  Lapped traffic was likely to keep him from catching up, though.

Meanwhile, the trouble wasn’t over for Montoya.  He came out of the pits after the aforementioned contact into a three-way battle for third with JDC-Miller Motorsports’ Tristan Vautier and Nasr.  The three DPis ran up on the Scuderia Corsa Ferrari of Toni Vilander with 13 minutes remaining.  Vilander first ran off course in the Esses, then rejoined just as Montoya was making a move on Vautier for third.  Contact was made between the three cars, sending Montoya into the wall and out of the race.  Vilander was also forced to retire.

That put Tincknell right on Castroneves’ tail for a green-white-checkered restart.  Unfortunately, Tincknell could do nothing with the INDYCAR veteran over the final two laps and had to settle for second.

The margin of victory for Castroneves and Ricky Taylor was just less than a second over Tincknell, Jonathan Bomarito and Ryan Hunter-Reay.  Nasr, Pipo Derani and Filipe Albuquerque recovered from two penalties of their own to finish third.  Vautier, Sebastien Bourdais and Joao Barbosa were fourth in their Cadillac, while Briscoe and van der Zande had to settle for fifth.

In LMP2, the crash at the start decided the class.  PR1 Mathiasen Motorsports’ Patrick Kelly was able to stay out of trouble, but Merriman’s spin and trip behind the wall put Era Motorsport 32 laps down.  As a result, the trio of Kelly, series debutante Scott Huffaker and Simon Trummer sauntered to victory.  They ended up seventh overall, nine laps behind the overall winners.

The GT Le Mans class saw Porsche GT Team’s Nick Tandy lead the pack to green.  He was able to maintain the advantage until the restart from that mirror debris yellow.  Here, Corvette Racing’s Oliver Gavin was able to jump Tandy and take the lead.  Trouble struck Gavin in the second hour, though as he cut his left rear tire.  The casing coming off right before pit entry ultimately drew the caution that put Castroneves back on the lead lap, but put Gavin a lap down.

The final stops decided the race in GT Le Mans.  De Phillippi made his final stop first.  Tandy pitted a couple of laps later and got out in front.  However, de Phillippi had already worked the tires on his BMW M8 GTE up to temperature.  On the exit of turn 5, de Phillippi was able to sweep past Tandy to take the lead.  From there, de Phillippi held on to take the win for himself and Bruno Spengler.

De Phillippi and Spengler ended up 4.383 seconds ahead of Gavin and Tommy Milner.  Jesse Krohn and John Edwards were third in the second BMW, followed by Tandy and Frederic Makowiecki.  Jordan Taylor and Antonio Garcia were fifth in the second Corvette.

In GT Daytona, AVS Vasser Sullivan’s Frankie Montecalvo led at the start, but quickly lost his advantage to Paul Miller Racing’s Madison Snow.  Snow, whose team is based in Georgia (despite being owned by Paul Miller, who is based out of Parsippany, N.J.), ran well all day on the 2.54-mile road course.

The race ended up being swung at the two-thirds’ mark.  Here, GRT Magnus’ Spencer Pumpelly was sent off into the tires by Action Express Racing’s Derani to bring out a yellow.  Pumpelly was OK, but eliminated on the spot.  This contact gave the No. 31 Cadillac their second drive-through penalty of the race.

Everyone in class pitted here and Corey Lewis got out of the Lamborghini in favor of Snow.  However, Meyer Shank Racing with Curb-Agajanian’s No. 86 Acura swapped out Matt McMurry for Mario Farnbacher and beat the Lamborghini out of the pits.  From there on out, no one could do much with the Acura.  Farnbacher was able to hold on through the final restart to claim the victory for himself, McMurray and Shinya Michimi.

The Shank team’s margin of victory was 2.451 seconds over Paul Miller Racing’s Lewis, Snow and Bryan Sellers.  Wright Motorsports’ Ryan Hardwick, Jan Heylen and Patrick Long were third in their Porsche while Riley Motorsports’ Lawson Aschenbach, Ben Keating and Gar Robinson were fourth.  AIM Vasser Sullivan’s Montecalvo, Townsend Bell and Aaron Telitz were fifth.  Troubles for the No. 14 Lexus of Jack Hawksworth when a cut tire put him off the road gave Farnbacher and McMurry sole possession of the GT Daytona points lead.

The IMSA WeatherTech SportsCar Championship will be back in action on Sep. 27 at Mid-Ohio Sports Car Course for the Acura Sports Car Challenge at Mid-Ohio.  That race is currently scheduled to air on NBC Sports’ TrackPass.