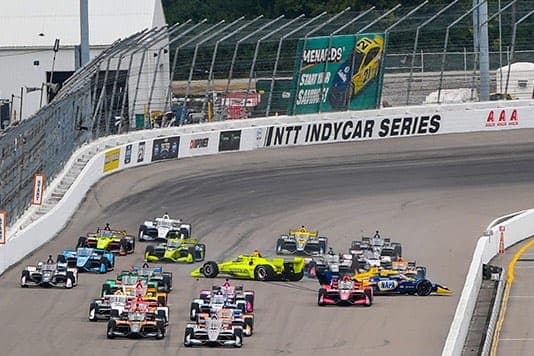 The 2020 Bommarito Automotive Group 500 (Aug. 29-30) was a doubleheader weekend of huge ups and downs for most of the NTT IndyCar Series grid, but some drivers had it exponentially worse than others.

In this edition of Backmarker Blues, we take a look at the IndyCar drivers who had a chronically difficult weekend at Gateway Motorsports Park—and how they can rebound for the next race, whenever that may be.

Last weekend wasn’t a great weekend for almost everyone in the Andretti Autosport camp. The multi-car crash that took place just as the green flag flew at the first Bommarito Automotive Group 500 race eliminated three of the team’s drivers—Alexander Rossi, Zach Veach and Marco Andretti. To make matters worse, the damage was somewhat self-inflicted; Veach likely could have avoided the accident but instead drove right into teammate Andretti.

It’s Rossi who seems to have taken the brunt of the bad luck though, both at the Bommarito Automotive Group 500 and throughout the whole season. While the Indy 500 winner has been able to capitalize on driving angry in the past, it just isn’t happening in 2020.

Andretti Autosport seems to be spreading itself thin this season. The team fields four full-time cars, one part-time car, and provides technical assistance to one other. While each car individually seems strong, it’s been hard for the team overall to make something of it on race day. Should Andretti consolidate its efforts into just a few cars, it might be able to achieve better results.

Full course caution after a crash at the start of Lap 1.

No. 5 Arrow McLaren SP driver Pato O’Ward finished on the podium at both Bommarito Automotive Group 500 races, which might make his inclusion on this list seem strange. But he’s been the bridesmaid throughout the 2020 IndyCar season and that was never more frustrating than at Gateway. No matter how strong his car, O’Ward just can’t seem to make things stick when it comes down to those crucial final laps.

After Sunday’s race, O’Ward noted that he simply had nothing left with which to challenge leader Josef Newgarden. That could be a team problem but it could also be a driver problem. O’Ward is a solid pilot yet struggles with  driving within the means of his car. To achieve that elusive first IndyCar win, the Mexican driver will need to learn how to manage his car in such a way that he has something left in the tank at the end of the event.

Arghh. We are so close. Second @WWTRaceway today?? awesome job all weekend @ArrowMcLarenSP 2 races, 2 podiums? congrats on the win @josefnewgarden

Santino Ferrucci has seen his potentially great results thrown away in the pits numerous times in 2020, most notably at the GMR Grand Prix. It was a similar story at Gateway. Problematic stops during both events put Ferrucci out of contention and left him scooping up 16th and 10th place finishes when he could have been fighting for podiums.

The No. 18 Dale Coyne Racing crew had apparently dedicated extra time during the Bommarito Automotive Group 500 weekend to practicing its pit stops, according to NBCSN’s broadcast, but to no avail. Their chronic problem illustrates the crucial interplay between team and driver, with both parties needing to be at the top of their game. That hasn’t been the case for Ferrucci’s unit. If they want a better result in the remaining three races, it’s down to the crew to get their stops in order.

. @santinoferrucci was running a killer #Bommarito500 race 1, leading laps and riding in 5th place, before an error in the pits cost him a better finishing position. #INDYCAR pic.twitter.com/bH2142Xs0Q

Graham Rahal had a Bommarito Automotive Group 500 weekend that he certainly would have liked to forget while his teammate Takuma Sato had a car that fought for a win.

Rahal had bad handling in qualifying and thus started at the rear of the grid for both Gateway races. That’s pretty much where he stayed. In the first event, his car picked up debris that resulted in a retirement. In the second, Rahal just couldn’t make the pace he needed to be able to gain track positions.

2020 has been a season of extreme highs and extreme lows for Rahal. He’s had more luck at road courses than ovals this year, which means he could have a more impressive remainder of the season since that’s what’s left on the IndyCar calendar—but the team needs to take a hard look at places where they can improve if he wants to finish the year on a high.

That was a weekend to forget. All things considered, the car got a lot better overnight, just not enough to get us where we needed to be. Track position was so hard to get today. After 3 weeks I get to see the wife and boys tomorrow – so time to relax and reset for the next one. pic.twitter.com/rZGGoaL7v0

After a strong start to the 2020 IndyCar season at Texas Motor Speedway, oval-only driver Ed Carpenter has had a serious drop off in performance. His Gateway doubleheader results were 20th and 21st—disappointing for any driver and a quiet end to his campaign.

The No. 20 Ed Carpenter Racing machine will be piloted by Conor Daly for the rest of 2020, so Carpenter can sit back and focus on his managerial role as team owner. Part of that will have to be considering if he wants to continue with his split schedule or perhaps consider putting a full-time driver into his car who could partner more consistently with Rinus VeeKay.

Despite the hard work by the team, the No. 20 did not handle the same as it did before EC was hit on Lap 1 of yesterday’s race. He managed the situation the best he could today, keeping his nose clean and completing the race.#Bommarito500 pic.twitter.com/NJAvSPy0IR