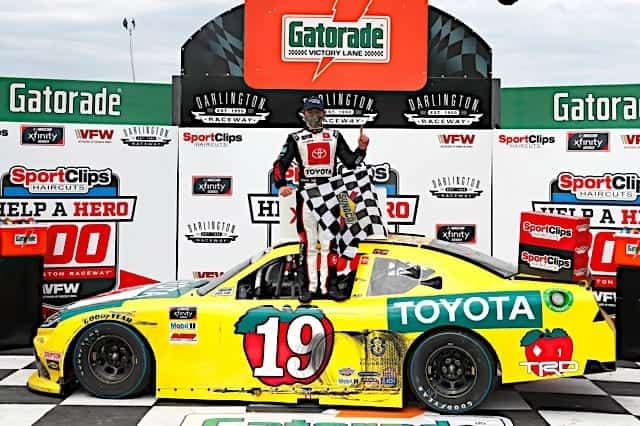 Brandon Jones put himself in position to win Saturday afternoon (Sept. 5) in the NASCAR Xfinity Series.

The Lady in Black combined with Lady Luck to take care of the rest.

Jones charged past Ross Chastain and Denny Hamlin to win the Sport Clips Haircuts VFW 200 at Darlington Raceway. He was the beneficiary when those two dueled a little too hard up front, making contact in turns 3 and 4 entering the white-flag lap.

Their issues caused Jones to close from over two seconds behind and breeze past for the lead. From there, it was smooth sailing as Jones earned his third NXS victory of 2020.

“Just smart in the head today, I think that’s what’s got ‘em,” Jones said. “I’ve been in this position a few times… I know to back the entry up whenever they’re going to race really hard and that’s my only option is to get a better exit [off the corner] than them.

“Sometimes, that’s what you gotta do… put yourself in position [to win].”

Jones’ surge past was a TKO for Chastain, continuing a frustrating winless season for him at Kaulig Racing. For the second straight week, Chastain was fighting for the lead within the final two laps only to wind up making contact with the wall.

Unlike Daytona International Speedway last Friday, where Chastain spun out teammate AJ Allmendinger, his No. 10 Chevrolet was the car in front. It was Hamlin, charging hard behind him, who staged a furious but clean battle for the victory over the final 15 laps.

The two went back and forth, tooth and nail, with each driver earning infamous Darlington stripes several times over. In the end, a desperate slide job by Hamlin with one-and-a-half laps to go didn’t stick and both drivers found themselves wondering what might have been.

“I thought I could clear him and get slowed up in time before I got into the wall,” Hamlin said. “He was running his line, I was running my line… I thought we had a great race going there.”

Hamlin had the fastest car all day but was hampered by track position. Starting the race dead last, he charged to the front to win both stages but continually lost spots on pit road every stop. On his final one, Chastain’s team beat the No. 54 pit crew out and forced Hamlin to make the pass instead of pull away.

“I couldn’t make up for the lost track position we were getting after every caution,” he continued. “Tried to race [Chastain] really clean, do the best I could to give him the space he had earned being up front. I just couldn’t get the car clear.”

That last-ditch effort, entering turn 3, initially launched Hamlin in front. But the No. 54 couldn’t hold his line, sliding up into the wall, slowing down and right into Chastain.

What a finish! Denny Hamlin and Ross Chastain both get loose while engaged in an epic battle for the lead, allowing Brandon Jones to blow past both of them and win the race. Holy cow… pic.twitter.com/dVvmERGhsT

“It allowed the 19 to catch up to us,” Hamlin admitted. “Both of us battling like that.”

“Denny was faster,” Chastain said in defeat. “I knew that, everybody knew that. I probably hit the wall 25 times [in the closing laps]… To go up against a guy like Denny Hamlin, to go to the end [like that], I’m just proud of the group. Proud of the effort.”

The finish was set up by a red-flag sequence sparked by Brett Moffitt dumping fluid on the racetrack. By the time his No. 02 pulled to the bottom of the track, oil was everywhere and leader Chase Briscoe hit the slick spots in turn 1. He spun out followed by Anthony Alfredo, among others, in an incident that also ended his hopes of a Darlington season sweep.

The delay forced the finish to move from NBC to NBCSN due to Kentucky Derby coverage. The restart with 21 laps to go also had Ryan Sieg, on older tires, leading them to green in an upset bid. Sieg used the track position to his advantage and ultimately came home third, an impressive recovery from a lap 2 spin that cost him a lap.

Further back, Brandon Brown recovered from that early lap 2 incident involving Sieg, Daniel Hemric, Alfredo and others to finish the race 17th with a damaged car. Also recovering from a lap behind, he maintained 12th in the series standings when electrical problems forced rival Jeremy Clements behind the wall in the final stage. Clements wound up 32nd, dropping some 45 points behind the cutline.

The NXS now moves to Richmond Raceway for the final weekend doubleheader of any of NASCAR’s top three series. They’ll race on Friday night, Sept. 11 at 7 p.m. ET followed by a matinee show at 2 p.m. ET on Saturday, Sept. 12. Both events will be covered by NBCSN and your local MRN affiliate.

About time Brandon Jones caught a break! He’s been on the wrong end of luck several times this season.