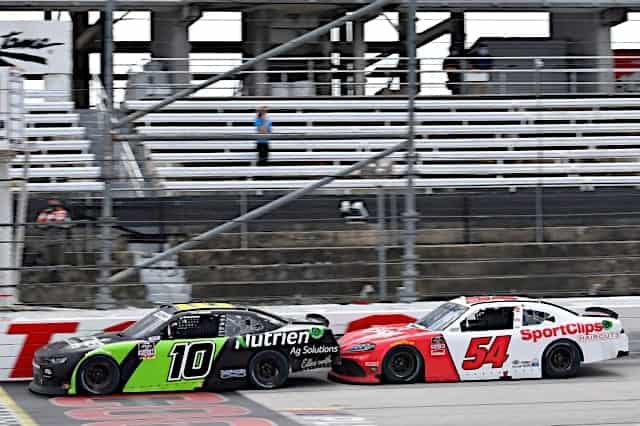 The Ross Chastain – Denny Hamlin battle for the lead in the final few laps of the Sport Clips Haircuts VFW 200 Saturday (Sept. 5) at Darlington Raceway ended in heartbreak.

After passing Ryan Sieg for the lead on lap 127, Chastain had to hold off Hamlin’s quicker No. 54 Toyota of Joe Gibbs Racing. He was almost successful in a frenetic battle up front. Both cars kept earning Darlington stripes coming off the corners, fighting hard in a fight reminiscent of the Kurt Busch-Ricky Craven battle for the win here in the Cup Series back in 2003.

With two laps to go, Hamlin got alongside Chastain entering turn 3 and pulled in front of him. But the slide job wouldn’t stick; Hamlin then got loose and tagged the wall. Chastain couldn’t avoid him, running into the back of the No. 54. The incident allowed Brandon Jones to sneak by and get his third victory of the season.

Although it was another heartbreaking result, Chastain still finished second while Hamlin was relegated to fifth. This last-lap move by Chastain may have caused Hamlin to drop back.

One thing it seemed the commentators missed was @RossChastain caught back up to @dennyhamlin and sent him into the last corner, dropping Hamlin from 2nd to 5th. #SportsClips200 pic.twitter.com/YDog0o762q

Though Chastain wanted the win, he was glad to race so hard with Hamlin and take a runner up.

”To come back after the first race at Darlington earlier this year and bring the kind of race cars that we do now is night-and-day difference,” Chastain told NBC after the race. “Denny was faster, I knew that, everybody watching on NBC knew that. I just kept ripping the top as best I could, I probably hit [the wall] 25 times and I was really struggling on entry. I had a weird sensation of speed where I felt I was overcharging the corner and Denny would drive two car lengths deeper every time. Had a ton of front brake in the car, I wouldn’t run the fence into [turn] 3, I would actually lock the left front up a little bit and lose my turn.

“We’re all fighting a lot of things but to be able to go up against a guy like Denny Hamlin, a future Cup champion, and go to the end like that with him… I’m just proud of this group, I’m proud of the effort, to come back two years after a heartbreak. Yeah, it’s another heartbreak but this one, we finished and we still finished second with a torn-up race car.”

The No. 10 Kaulig Racing driver referenced his encounter with Kevin Harvick two years ago in describing Saturday’s battle, although that wreck occurred much earlier in the race.

Coincidentally, both Hamlin and Harvick are two favorites this year for the Cup championship. There were more respectful words between Hamlin and Chastain this time around, though.

“I just needed to make the crossover sooner into [turn] 3 there,” Chastain said. “And if I just make that and get back to his left rear, I think we race it out.”

There was a small bright spot for Chastain, who also led 43 laps. He officially secured a playoff spot with three races left in the regular season.

Unlike Harvick in 2018, Hamlin was more positive on his battle with Chastain.

“I thought I could clear him and get slowed up in time before I got into the wall,” Hamlin explained on NBCSN.  “I couldn’t make up for the lost track position we were getting after every caution. He was running his line, I was running my line; I thought we had a great race going there.

“It allowed the 19 to catch up to us, both of us battling like that.

“I tried to race him really clean, do the best I could to give him the space he had earned being up front. I just couldn’t get the car clear.”

Let's look at the final 7 laps.

With the Ross Chastain-Denny Hamlin battle clearing the way for Jones’ victory, the Xfinity Series now makes the trek to Richmond Raceway for another doubleheader on Friday and Saturday, Sept. 11-12. Both races will air on NBCSN and your local MRN affiliate.

Am I the only one who was disgusted to see Denny in this race? It’s bad enough for Cup drivers to steal wins by beating the NXS drivers cleanly, but quite another to see them wreck Playoff contenders. NASCAR has disallowed Cup drivers in the lower series final championship races. It seems they should be banned from competing in all the Playoff races for NXS and Trucks.

OK, my bad! I will admit it before anyone else points it out. This was NOT a Playoff race for NXS. So, I guess Denny was just a normal interloper, not a spoiler in the NXS Championship.

Befuddled are ya pkl. poor mama

Drug Addict Denny is one of NASCAR’s protected drivers, he can get away with what ever he wants and nothing will be done to him and he knows this, Jimmy Johnson and Jeff Gordon were the same, everyone has herd the drug stories for years, but like Hamlin they were protected by nascar, because these are driver they like so they let them do what ever they want