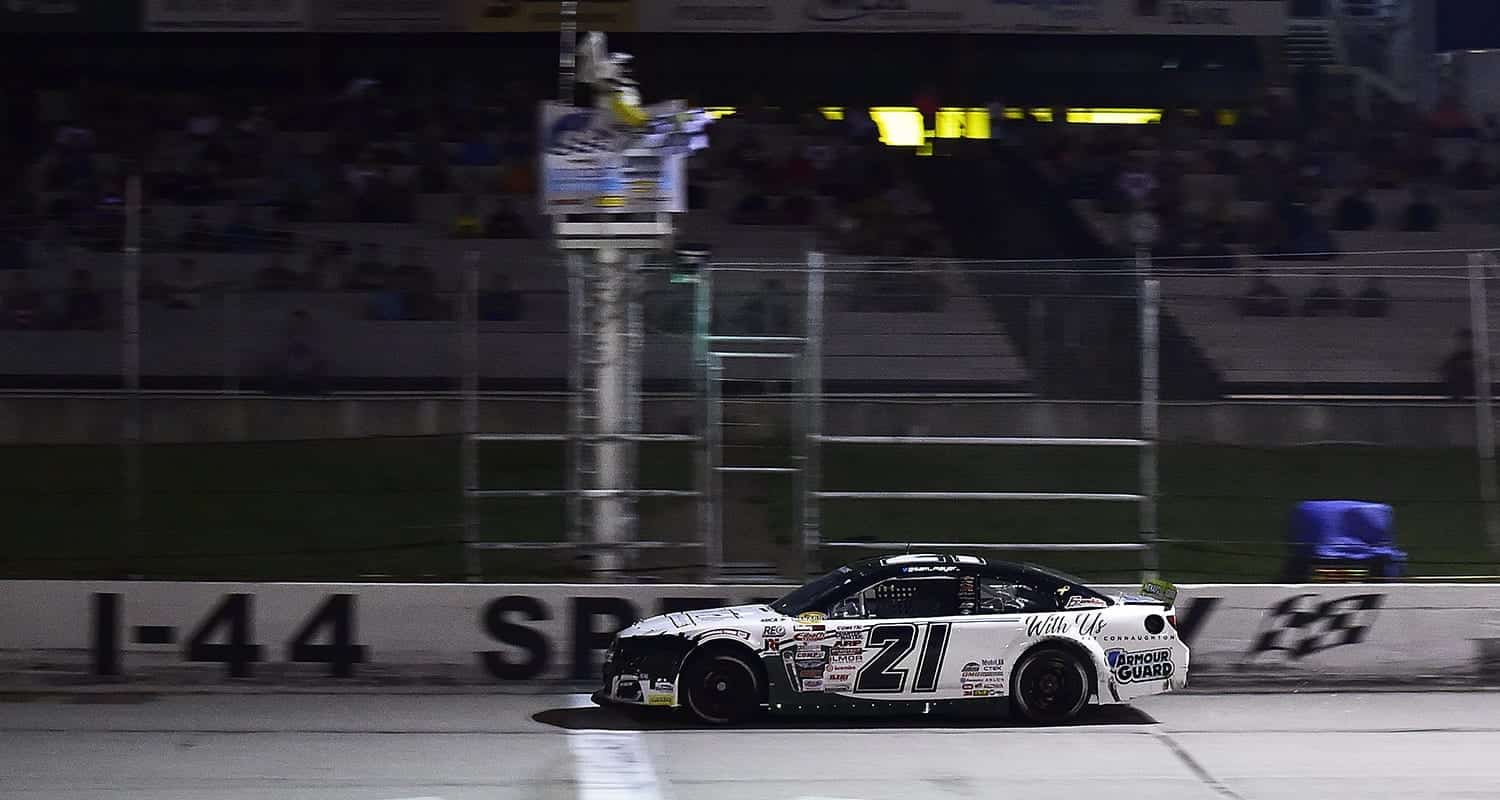 GMS Racing’s Sam Mayer snatched the lead away from DGR-Crosley’s Hailie Deegan on a restart with 45 laps to go in the Zinsser Smartcoat 200.  From there, Mayer was able to pull away to win Saturday night’s (Sept. 5) ARCA Menards Series event at Lebanon I-44 Speedway.

“I finally got my restarts down,” Mayer said in victory lane.  “After losing the Truck race at Gateway (World Wide Technology Raceway) last week on the restart, it feels really good to win on a restart this week.”

Bret Holmes qualified on pole Saturday afternoon and appeared to have the car to beat early on.  Over the first 30 laps, he pulled away to a three-second lead and appeared to be cruising.

Then, an early green-flag tint to the race turned yellow – and rough.

Venturini Motorsports’ Chandler Smith had a terrible night on the Lebanon I-44 high banks which started with a little extra help.  Deegan ran up on him from behind and, after a couple of laps of battling for fifth, spun him out in turn 1 to bring out the night’s first caution.

The spin cut Smith’s left front tire.  Given the location of pit-in at Lebanon I-44 Speedway (just before the entrance to turn 1), Smith had to drive all the way around the track with a flat tire, throwing sparks the whole way.  By the time Smith got to his pit, he had hurt the front suspension on his car.  That led to a very long night.

Deegan appeared to have the best car in the first half of the race.  She was able to make her way to second and challenged Holmes for the lead.  There was a prodigious amount of contact between Deegan and Holmes before additional contact spun out Holmes in turn 1 on Lap 69.

And around goes Brett Holmes! Hailie Deegan to the lead!!

Behind the leaders, Smith spun again trying to avoid the incident.  The crash prevented him from getting the free pass as he was the first driver off the lead lap at the time.  Meanwhile, ARCA officials chose not to levy a penalty on Deegan for the contact.  However, since it was the second time that she had spun someone out in the first 70 laps of the race, they did issue a warning about rough driving.

Holmes was none too pleased with Deegan’s on-track conduct.

“I wouldn’t call [tonight’s race] typical short track nonsense.  I just call it a lack of respect,” Holmes said after the race.  “Some drivers just don’t understand what it’s like to run your own team and have to pay for their own stuff, so they just… knock people out of the way every time they have to take the lead.”

Despite that warning, Deegan was allowed to assume control up front with Mayer in second.  The second 75-lap segment saw Deegan racing hard with Mayer and holding off the phenom.

Meanwhile, Smith’s race only seemed to get worse.

Even though he was running two laps down, Smith was still on pace with the leaders and seemed to be running blocker for Michael Self.  The blue flag did not appear to be used much here, either.  Holmes, trying to recover from the previous incident, was more or less stuck behind the TRD Development driver.  Eventually, contact was made and Smith spun for the third time Saturday night.  Later on, Smith made it four incidents when he collided with Kris Wright, cutting his second tire of the race in the process.  Smith would eventually finish two laps down in eighth.

As for Self, the ARCA point leader didn’t escape any of the wrecking, either.  While running second, he was tipped into a half-spin on Lap 49 by Ty Gibbs in turn 2.  That contact, which did not bring out a yellow, led to significant damage to Self’s left front corner and a tire rub.

Self was running fifth when (like Smith), he collided with Wright.  This incident saw him spin out in turn 3, slide across the grass outside of the racing surface and hit the wall.  The Sinclair Oil Toyota suffered significant rear end damage, but Self was able to continue after repairs and finish a lap down in sixth. That allowed him to keep the ARCA point lead, although his advantage shrunk to one over Holmes.

Mayer’s margin of victory was 2.977 seconds over the Alabama native.  Behind them, Deegan and Gibbs raced hard in the closing laps for third.  Contact was made multiple times.  On the final lap, the two collided entering turn 1, resulting in Deegan spinning out and Gibbs cutting his right front tire.

The incident allowed Taylor Gray to equal his career-best run with a third-place finish.  Gibbs just barely managed to hold off a recovered Deegan to finish fourth.