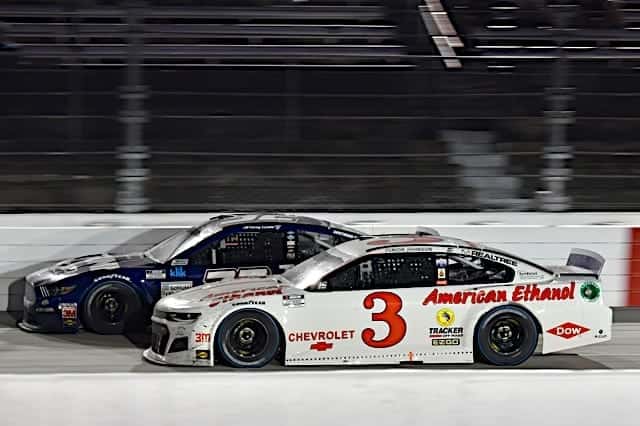 Austin Dillon was on many people’s list as a first-round exit from the 2020 NASCAR Cup Series playoffs but proved Sunday night (Sept. 6) that he’ll be a tough out.

Dillon wheeled his No. 3 Chevrolet to a stout second-place finish in the Cook Out Southern 500 at Darlington Raceway, adding plenty of momentum to what has been a solid season for the sixth-year driver. He launched up from fourth to second after leaders Chase Elliott and Martin Truex Jr. tangled in pursuit of the top spot and was left to chase Kevin Harvick for the victory.

The Richard Childress Racing driver erased a 1.4-second deficit to mere feet at the exit of turn 4 coming to the checkered flag, but Dillon could only powerslide his way off the final corner and settle for second.

“We just adjusted and tweaked [the setup] a little bit to take off a little better,” Dillon said, a winner of the Daytona 500 and Coca-Cola 600. “That’s what we wanted, and it did. That helped us keep our track position and ultimately gave us a shot at a Southern 500. So close to one of the crown jewels again. I mean, I like winning those things.”

Dillon, the grandson of car owner Richard Childress, knows he was far from a favorite entering the opening round of the playoffs. That doesn’t bother him.

“I get overlooked probably more than most [drivers], I don’t know why,” Dillon said. “But I always feel like I perform pretty well in pressure situations, and RCR as a whole can step up. I have total belief in the [No.] 3 team and probably more belief this year than I’ve ever had because we’ve brought consistent speed to the track.

“We might not have gotten every finish that we should’ve gotten this year, but we’ve gotten a lot of good finishes. I mean, it’s been one of my best years statistically and just the ability behind the cars [is] better.”

Teams had the benefit of running two spring races at Darlington in May. Dillon and his RCR teammate Tyler Reddick finished 11th and seventh, respectively when NASCAR returned from its COVID-19 hiatus on May 17. Dillon then followed those runs up with efforts of 20th and 13th four days later.

Dillon said the organization learned a lot between those two races, particularly since there was a 20-degree swing in temperature between those events.

“I really focused on the temperature this week,” Dillon said. “And what we brought to the track was pretty much based off of what we felt was best for the temperature and how the race was going to play out. There’s a lot more rubber on the track, so we really did a good job of putting in the work, adjusting.”

Receiving a significant portion of Dillon’s credit were crew chief Justin Alexander and engineer Billy Scott, but Dillon made sure to point to the whole of the organization for its efforts this season. While Dillon is enjoying a successful year, so too is Reddick, who has made a solid splash in his rookie season with seven top 10s and two top fives.

“I think you’ve got two different driving styles,” Dillon said. “And you try and find two drivers that kind of push each other. Tyler’s a competitor just like myself. He’s very adaptive to different tracks, so I have to learn from him and I think he can learn from me, too. I think some of the things I do really well and I struggle with, he does better, and there’s both sides of it.

Now, Dillon shifts his focus to Richmond Raceway, where the Cup Series rolls for the second race of the Round of 16 on Saturday, Sept. 12 (7:30 p.m. ET, NBCSN).

This shows how important Stage and Playoff points are. Austin Dillon finishes the race in second place, but is 8th in the standings, not that far from the cutoff line.