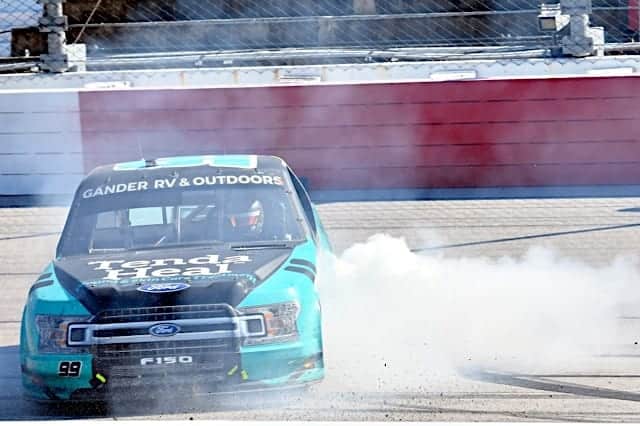 Sunday’s (Sept. 6) NASCAR Gander RV & Outdoors Truck Series event at Darlington Raceway was decided on pit strategy. The closing laps saw a handful of trucks take a chance, staying on track during a late caution on old tires. It’s typically not the best decision when it comes to an abrasive oval known as the Track Too Tough To Tame.

But the gamble paid off for Ben Rhodes.

Opting to not pit while the frontrunners came down pit road for fresh rubber, Rhodes passed Derek Kraus going down the backstretch during NASCAR Overtime. That earned him the victory in the South Carolina Education Lottery 200, his first in the Truck Series since 2018.

“That was such a tough win,” Rhodes said. “We weren’t the best truck all day. I was actually pretty disappointed when that caution flag came out, because I thought fourth was a good finish and it got us in the playoffs… [but] I’m not letting this checkered flag go. It’s been a long time coming.”

Kraus, despite giving up the lead, earned a career-best finish of second. He eked across the line ahead of Austin Hill, Grant Enfinger and Christian Eckes. Raphael Lessard was sixth ahead of Todd Gilliland, Stewart Friesen, Timmy Hill and Brett Moffitt.

The race looked to be a surefire win for Sheldon Creed as the laps ticked away. But when Josh Reaume’s truck lost control with two laps to go, collecting the machine of David Ragan, a caution flag flew that wound up scrambling the field. In more ways than one, a decision to come down pit road while leading ended up being Creed’s undoing.

He not only lost track position but also was penalized for being too fast entering pit road, ending hopes of a win.

For the most part, the race was shaping up similar to those seen as of late – one dominated by GMS Racing teammates Moffitt and Creed. The two of them combined to lead all but six laps Sunday. Creed led the most, pacing the field for 82 circuits while seeking a third victory in five races.

"I don't want him to hang his head about it." @sheldoncreed with some encouraging words for his crew chief after a tough ending at @TooToughToTame. pic.twitter.com/I10yDV24MK

As long as either was near the front of the field, they took advantage. In the final stage, after a spin by Tyler Ankrum, the race restarted with 40 laps to go and Moffitt rocketed away by about one second.

Then, on a restart with 18 to go following Zane Smith and Tanner Gray making contact? It was Creed’s turn to jump ahead, besting Moffitt in a three-wide pass with Hill. It was a move that, for a time, appeared to be a race-clinching one before the race went into overtime.

Ragan had the strongest day of the three former NASCAR Cup Series drivers who were back on track Sunday after time away from competition in NASCAR’s top three national divisions. He ran near the top five for a good part of the race and ended up 22nd while Greg Biffle was 19th and Trevor Bayne a disappointing 27th.