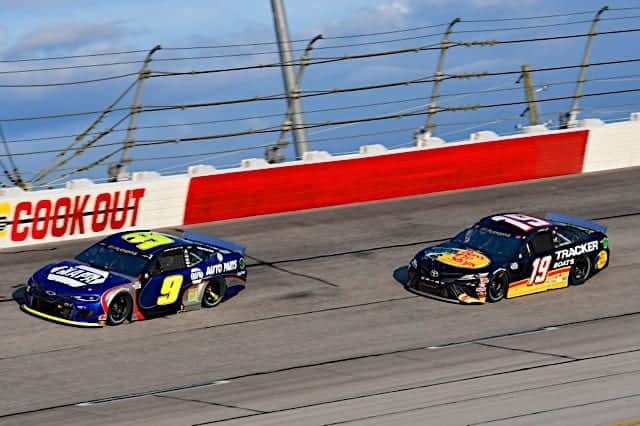 Two of the fastest cars did not win the Cook Out Southern 500 at Darlington Raceway due to a late-race collision between Chase Elliott and Martin Truex Jr.

Pole sitter Elliott led 114 laps on Sunday night (Sept. 6), including the opening 71. But he eventually gave way to Truex, who quickly established himself as the class of the field, winning the first two stages and leading a race-high 196 of 367 laps.

In the final stage of the race, Elliott’s strategy was to pit twice while Truex’s was to make just one stop. After Truex pitted, Elliott assumed the lead on old tires. Shortly thereafter, the caution flag flew, saving him from making a second green-flag stop of the run. The strategy worked; all drivers pitted again, shuffling Truex back into the bottom half of the top 10.

Truex fought back hard, working his way back up to second and tracked down Elliott. However, he couldn’t get close enough to attempt a pass for several laps. Elliott, who had been running the high lane, then attempted the bottom. This move allowed the No. 19 to get a huge run and Truex tried to pass Elliott on the bottom heading into turn 1. But Truex couldn’t clear the No. 19 and slid up into Elliott instead, causing both cars to slam the wall.

“He had a run off of me off of [turn] 4, and he just kind of cleared himself into [turn] 1,” Elliott told NBCSN. “He was close, but he wasn’t all the way clear, obviously.

“I hate it. I obviously had a fast NAPA Camaro, fast enough to contend. We need a little pace there to extend our lead instead of playing defense. But regardless, we’re in a good spot. I ran the bottom there in [turns] 3 and 4 to see if there was anything left down there. That’s kind of what gave him the run, and he slid up into my left front, I feel like, and on we went.

“Par for the course here, I suppose.”

The post-race comments were a bit more subdued from Elliott compared to what he said during the race.

“About to blow a tire here,” says Chase Elliott. Helieves it the right front. Of that move from Truex, “not f**king clear, jackass.” | #NASCAR

It’s the second time this year at Darlington Elliott’s strong run has been affected by a driver from Joe Gibbs Racing. Back in May, he had a potential second-place finish wiped out due to contact with Kyle Busch on the frontstretch.

This time around, Truex pitted not long after Sunday’s contact while Elliott sank back through the field. Both drivers ended up with disappointing finishes: Elliott ended the day in 20th and Truex slid to 22nd.

“Just not enough room there for the both of us,” Truex told NBCSN. “I thought I had enough of a run to clear him. I think it was close, obviously, and I thought I had enough … momentum and distance on him that he would let me in there. I didn’t expect him to be on the right rear, and I was committed, and once I figured he was still there, nothing I could do.

“Really unfortunate for our Bass Pro Toyota. Unbelievable job by the guys and smokin’ fast racecar.”

With Darlington marking the first round of the playoffs, both drivers were desperate to score a win and guarantee two stress-free weeks before the Round of 12 begins.

“It was nothing intentional,” Truex said. “Just two guys going for the win and not enough room for both of us there. So if it was my fault, I apologize. I really felt like I had the position to get in there into [turn] 1. So that’s how it goes, and we’ll see what goes on from here. … A few inches, either you wreck or give it to the guy. I feel like I was on the right side of things, but I’m going to go back and look at it, see if I should have done something different.

“Sometimes, things just don’t work out. We gave it our all and came up short.”

The crash ended a streak of eight straight top-four finishes for Truex. The No. 19 failed to visit victory lane during that stretch and he hasn’t won since Martinsville Speedway in June. Elliott, meanwhile, failed to win his first Southern 500 at a track where he’s yet to run better than fourth.

Both drivers will look to regroup next weekend at Richmond Raceway. The NASCAR Cup Series will travel there on Saturday, Sept. 12, for the second race in the Cup Series Round of 16.

Truex, thought he would let me in there. Duh, he’s racing for his win truex, not for a gimme to you. If it were reversed, I can hear your whining.