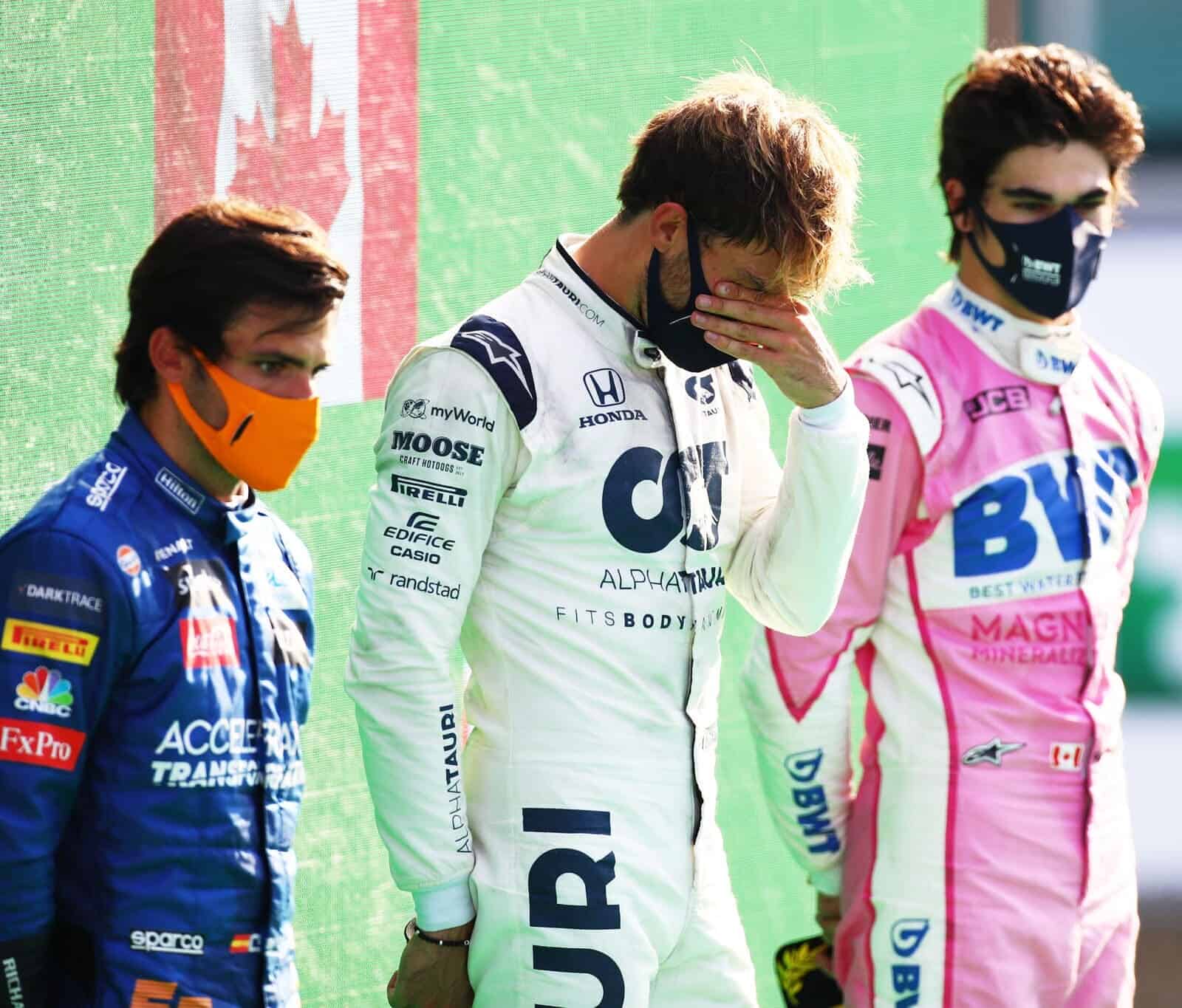 Formula 1 fans begging for a different Grand Prix storyline got their wish with the Italian Grand Prix on Sunday (Sept. 6).  Up to now, the typical F1 weekend in 2020 has usually gone something like this: Mercedes qualifies out front with Lewis Hamilton on pole; Hamilton wins the race after being the best driver in the best car driving for the best team.

Any hiccups to that pattern have seemed strange.  And yet, those peculiar moments have featured only two other teams on the grid for the last 146 races.  If Mercedes does not win… Red Bull or Ferrari does.

That’s it.  For over seven years!

To have a team outside of the dominant three victorious is an event tantamount to an earthquake within the F1 world. It certifies that 2020 is the year of all that can be unanticipated.

Pierre Gasly’s win for AlphaTauri in Italy is bellissimo for so many reasons.  Unheralded driver.  Underfunded team.  A blow to the big organizations on top.  A delightful surprise.

There’s something Magical about us and Monza ❤️ ?? #AlphaTauri #F1 #ItalianGP ?? pic.twitter.com/myXqSZAuLR

Both Gasly and AlphaTauri deserve all the credit in the world.  They may have won over a field that had been upset by wounded cars, differing pit strategies, and a superstar sent to the rear, but they still did what they needed.

Gasly’s win also follows up on the strength that both he and AlphaTauri have shown this season.

For the first 15 laps, the Italian GP looked like another runaway for Hamilton.  The big change was that, rather than Valtteri Bottas or Max Verstappen chasing him, it was Carlos Sainz who held down second.

Kevin Magnussen’s car failure brought out the big moment of confusion.  Initially, the local yellow flags waved, which is when Pierre Gasly pitted on lap 19.

The field pitted during the safety car period and shuffled the field further. However, though Hamilton sat in the lead, he had already been informed of his penalty.

Once the safety car pulled off, the race resumed and was halted within a lap as Charles Leclerc raced off Parabolica and into the barriers in what looked like a brutal wreck.  That Leclerc could be spotted trotting down the track a few minutes later is another example of the safety measures these cars now have.

Though Leclerc may have been OK, his Ferrari was totaled and the tire barrier destroyed with the result being a red-flag period to fix the barrier.

Lance Stroll is a driver who should have been in the best position to take advantage of the situation.  He had yet to pit and sat behind Hamilton on track.  The red flag period allowed for teams to change tires and make repairs to the cars. Stroll would exit in second with fresh Pirellis knowing that Hamilton had to pit within two laps of the race restarting.

Stroll, however, botched the restart, spun his tires, and Gasly capitalized, sneaking into second.  When Hamilton pitted and dropped to the back of the field, Gasly took over the lead and held the position until the end.

Carlos Sainz passed Stroll and moved into second behind Gasly. For a while, it looked like he would be able to catch and pass him, too.  Once Sainz got within a two-second margin, he stalled, making his way into DRS range but never being close enough to make a move on the leader.

Gasly managed to hold on and claim the first win of his career and the second ever for AlphaTauri (who won as Toro Rosso at Monza with Sebastian Vettel in 2008).

Lando Norris took the fourth spot with Bottas taking fifth after a poor start and an ill-handling car.

Daniel Ricciardo earned the sixth position with Hamilton rebounding from 17th to take seventh.  Esteban Ocon crossed the line in eighth with Daniil Kvyat following in ninth.  Sergio Perez earned the last spot in the points by finishing 10th.

– The average age of the top four finishers is 23.  Gasly is just 24 years old, Sainz is a relatively old man at 26, Stroll is 21, and Norris, already in his second year, still is unable to drink legally in the U.S. at 20.

Throw in Ocon (23), Nicholas Latifi (25), Alexander Albon (24), Max Verstappen (22) plus George Russell (22) and you have a grid featuring nine drivers who are all 25 years old or younger.  In any sport, youth is a dish that is delicately served.

Given the right team, with the proper support behind them, and a driver with the right temperament, the combination can make a talented wunderkind come to life.  But if the factors do not align, the experiment becomes a disaster.

While the odds would posit there is no way that all nine drivers will enjoy lengthy careers, there is reason to believe that many will.  The top four at the Italian GP all look to be stable in the sport for the foreseeable future.

Gasly has a win and is leading an AlphaTauri charge.  Sainz is moving to Ferrari next year in a move that is usually considered reaching the pinnacle of the sport.  Stroll has continued to grow and now has two podiums.  Even Norris, who earned his first podium this year, looks like a standout in the making.

Will Latifi, Albon and Russell be able to hold on and find comfort?  Albon looks like he is floundering, but Red Bull also seems to be missing something in its setups this year.  Given another year, he might be able to make it.

The Williams duo might have the most reason to be nervous as new ownership may find reasons to put new drivers in their seats.

For now, the youth movement in the sport looks like they are in the process of taking over.  Such a reckoning makes the hiring of Fernando Alonso (41) for Renault look all the more curious.

Povero Ferrari! Che peccato!  The Tifosi should be happy that they did not have to watch Ferrari fall out of the Italian Grand Prix.  The Prancing Horse have figured out new ways to disappoint its fans this year, moving in between lackluster performance, poor pit decisions, questionable driver moves and all-around foolishness.

The Ferrari meme threads on Twitter are strong, with loads of lovely visualizations for how poorly the team is performing.  Here’s one that is PG-rated with the Horse leaving the famed insignia.

At a track where Ferrari should bring its best, they again delivered a rotten egg.  Sebastian Vettel failed to make the quarter mark of the race distance after his left rear brake rotor went aflame.  He limped back to the paddock and retired on lap 6, which is more than can be said for his teammate.

Leclerc’s crash into the barriers exiting Parabolica is what changed the whole race.  Forgotten, however, is how poorly the young driver was performing prior to the wreck.  Nothing he had done on track made it seem like he might somehow pull another magic trick and finish inside the top five.  Plus, his race strategists did little to help.

If any team is going to have to give itself a solid examination of its operations this offseason, from top to bottom, it’s Ferrari.  And if any driver is having some queasiness about 2021 (yes, there is still supposed to be a 2021), it has to be Carlos Sainz, who is moving from a strong-running McLaren to a team that seems lost and confused.

Red Bull has provided the best threat to Mercedes this year and yet, at a race that could have been there for the taking, they faltered.  Neither of the two cars looked to have any noticeable pace during the weekend.

Max Verstappen retired two-thirds of the way through the race when the team radioed him they found something suspect with the engine and he should pit before it blew up.  Verstappen was mired outside the points when he made the move anyway.

Alexander Albon, who is facing increasing scrutiny, seemed to drive above his head, bouncing into at least two different drivers and incurring a five-second penalty for avoidable contact.  With a damaged car, Albon managed only 15th.

So as bad as Ferrari was, Red Bull nearly matched its competitors in disappointment. Considering that its sister team AlphaTauri won, Red Bull will have a few sleepless nights before next weekend’s race at Mugello.

As should be expected, Gasly was exuberant after the race.

“Honestly, it’s unbelievable,” Gasly said. “I’m not realizing what’s happening right now. It was such a crazy race, and then we capitalized on the red flag. I’ve been through so much in the space of 18 months, my first podium last year, I was already like ‘wow’ with AlphaTauri. And now my first win in Formula 1 in Monza, I struggle to realize… I have got no words.”

Stroll, meanwhile, showed his dejection on giving away a race he thought he should have won.

“It’s a bit of a bummer,” Stroll said. “I think it was kind of mine to lose starting from second, but I had… a ton of wheelspin and everyone flew by me. I had such a bad second start, I fell back to sixth. We have to look into it – there was just no grip on that second box, I was wheel-spinning into fourth gear – I felt no grip. Not sure why. That kind of stings a bit. I think there was an opportunity to win the race today with our pace, after the red flag.”

Finally, Sebastian Vettel delivered a wry comment about the terrible showing by Ferrari and the lack of fans at Monza.

“It’s a testimony of where we stand,” he said of the last-place finish. “It’s poor, obviously, where we are, especially here for our home race – I think it’s probably a blessing that there’s nobody in the stands.”

The most exciting F1 race of the year.