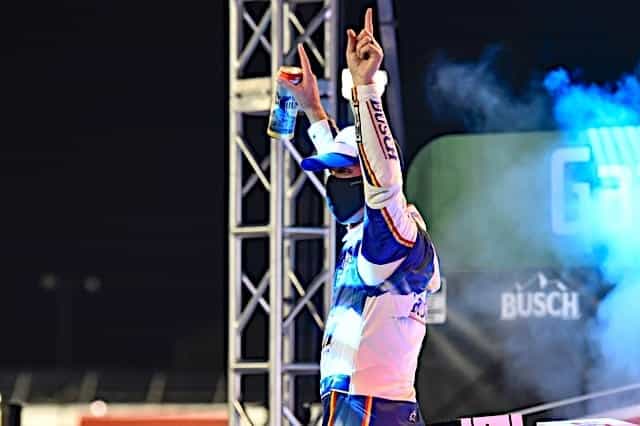 Contact between Elliott and Harvick with 15 laps remaining damaged both cars badly enough to slow Elliott’s car and force Truex to pit in order to repair a flat tire. The result was Harvick opening the NASCAR playoffs with a hard-fought win in the Cook Out Southern 500. Elliott ended up 20th while Truex was 22nd.

“Just wound up fighting all night long. The Busch Beer Ford Mustang was not where we wanted it to be,” Harvick said. “The leaders got tangled up, and the next thing you know, we were racing for the win.”

Austin Dillon: "I was just trying all I could…Man, it would've been nice to get that win and lock ourselves in the next round, but a great finish for our No. 3 team. What a fun race. A great run for Junior Johnson, he's one of my heroes." #Southern500

It was a hard-luck missed chance for Truex, who dominated a majority of the race by winning the first two stages and leading 196 laps, the most of any driver.

“It was nothing intentional, just two guys going for the win and not enough room for both of us there. So if it was my fault, I apologize,” Truex said. “I really felt like I had the position to get in there into one.”

BOTH OF THEM HIT THE WALL!

It was Elliott who led the second-most laps with 115, setting up the late-race duel between the two best cars. But it wasn’t always that way Sunday night.

Elliott was among the best cars early on, leading the first 71 laps. But the No. 9 Chevrolet sustained slight damage early in the second stage, and that played a role in dropping him back in the field. With Truex dominating, it looked to be his race to lose.

However, Elliott was among those pitting earlier than the leaders during the final stage, opting for what would have been a two-stop strategy instead of one. When a caution came out for debris on the backstretch, ensuring a second stop wasn’t needed, the call nearly paid off handsomely. While faster cars such as Truex and Denny Hamlin were out there on older tires, in need of fresh rubber, Elliott and Harvick had gained crucial track position. With 46 laps to go under that yellow, Elliott was in front and held the lead during yellow-flag pit stops.

After the restart, as the laps ticked off, Truex chopped into Elliott’s lead, catching him with 15 to before the two made contact.

“He had a run off of four and he just cleared himself in one. He was close, but he wasn’t all the way clear,” Elliott said. ” I thought we were in a good spot. I ran the bottom there in three and four to see if there was anything left down there. That’s kind of what gave him the run and he slid up into my left front, I feel like, and on we went. Par for the course here, I suppose.”

Those two weren’t the only championship-eligible drivers who found trouble. Ryan Blaney had a tumultuous night, one that was off to a bad start before it began. He started at the rear of the field after being penalized for an improperly mounted ballast in pre-race inspection. Things got worse to start the second stage when Blaney pitted with a flat left rear. He would finish 24th.

Blaney was joined by a Team Penske satellite effort, the Wood Brothers, with his playoff woes. Matt DiBenedetto was 21st, also finishing a lap off the pace. Those two are currently on the outside looking on on the Round of 12 along with Stewart-Haas Racing teammates Clint Bowyer and Cole Custer.

Other Penske drivers faced adversity but fared better. Joey Logano suffered rear-end damage from a restart before rallying to finish third. Teammate Brad Keselowski had to pit after damaging the right side of his car on the race’s 82nd lap. But Keselowski rallied back, salvaging an 11th-place finish despite a worn-out Darlington stripe.

The NASCAR Cup Series races next Saturday, Sept. 12 at Richmond Raceway with the Federated Auto Parts 400. The race will be televised at 7:30 p.m. ET on NBCSN and can be heard on SIRIUS XM radio or your local MRN affiliate.