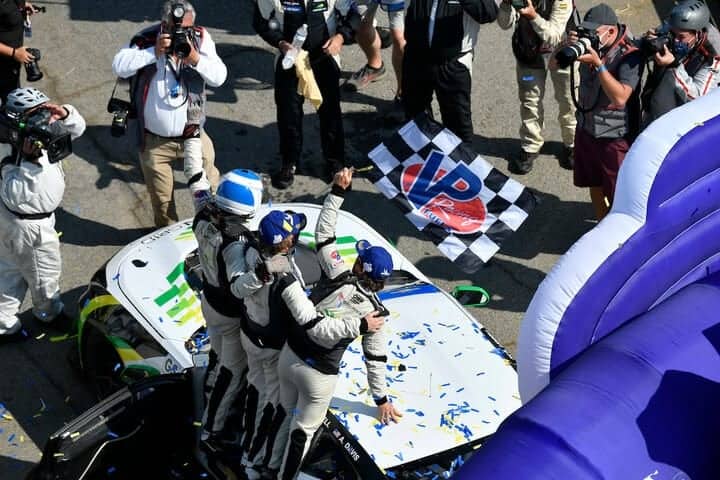 “The whole team did a fantastic job today,” Liddell said after the race.  “This weekend, we’ve worked incredibly hard to make this operation the best it can be.  We’ve got one of the most outstanding groups [of people] that I’ve ever worked with.”

KohR Motorsports’ Nate Stacy led from the pole in his Aston Martin with Archangel Motorsports’ Trent Hindman giving chase.  A few laps into the race, defending race winner Sebastian Priaulx was able to get past Hindman for second.  Stacy and Priaulx proceeded to run away from the field, opening a 10-second gap on Hindman.

Things got strange roughly 38 minutes in when Riley Motorsports’ James Cox ground to a halt just before the FOX Factory bridge to bring out the first caution.  It’s unclear what caused the car to stall, but what is fairly clear was that the caution was extended when Brent Mosing hit Cox’s Mercedes underneath the bridge.  The contact put both drivers out of the race.

After the first round of stops, Murillo Racing’s Eric Foss moved up into contention.  In Multimatic Motorsports’ case, the team struggled a bit once Scott Maxwell got in the car.  Tire wear seemed to be their nemesis.

A caution at the halfway point when Winward Racing’s Philip Ellis collided with the Roadshagger Racing TCR-class Audi of Jon Morley brought everyone back together and created multiple strategies.  Most of the leaders had already made their stops, but Foss had not.

Out of this scenario, Turner Motorsport’s No. 95 BMW of Bill Auberlen was in good position to potentially grab another win.  A flat left front tire with a nine-second lead was very costly, though.  A second puncture resulted in a 18th-place overall finish.

Auberlen’s flat tire put Liddell in the lead briefly, but Kohr Motorsports’ Kyle Marcelli was able to pass him at the chicane.  Shortly afterwards, a piece of debris exiting turn 5 brought out the final caution with a little more than an hour to go.  More pit strategy saw Marcelli and the majority of the leaders stop.  The result of that round of stops was that Foss ended up back in the lead while Liddell moved himself up into contention in second.

The leaders made their final stops with 41 minutes remaining.  BimmerWorld Racing attempted an alternate strategy of trying to run the final 55 minutes on fuel.  That would have required at least one full course caution to work and it didn’t come.  Dillon Machavern had a 31-second lead with 20 minutes to go, but had to pit for fuel.

On the final round of stops, Liddell was able to jump Foss and put five seconds between himself and Foss’ Mercedes.  Once Machavern stopped, Liddell got the lead.  Foss tried to run down Liddell, but a lack of lapped traffic meant that it was just not possible to prevent the veteran racer from taking his first win of the year and third with Rebel Rock Racing.

On the final lap, Foss ran out of fuel in his Mercedes-AMG GT4 on the far end of the course.  Given the terrain at Michelin Raceway Road Atlanta, running out anywhere before the FOX Factory bridge means you’re probably not going to make it back around.  Sure enough, the No. 56 Mercedes slowed to a stop on the uphill run prior to turn 9.

BimmerWorld Racing’s Machavern and Nick Galante ended up sixth after an alternate pit strategy failed to pay off.  Machavern cut a tire on the final lap of the race, which allowed Dontje to get past.  Stacy and Marcelli ended up seventh, followed by PF Racing’s Chad McCumbee and James Pesek.  James Clay and Greg Liefooghe in the second BimmerWorld BMW were ninth, while Foss and Jeff Mosing were forced to settle for 10th, one lap down.

In TCR, Bryan Herta Autosport’s Harry Gottsacker started from the pole, but quickly lost his advantage to KMW Motorsports with TMR Engineering’s Tim Lewis Jr.  Sunday was probably the Alfa Romeo’s best race in Michelin Pilot Challenge to this point.

During the first round of stops, Ryan Norman in the No. 33 Hyundai was able to jump the Alfa Romeo and take the class lead.  Lewis and Block were able to keep tabs.  Lewis was able to get back into the class lead but his car decided to stop shifting gears.  That forced Tim Lewis Jr. to pit for repairs that cost the team four laps.  Additional issues resulted in Tim Lewis Jr. and Block finishing six laps down in sixth.

Gottsacker and Mark Wilkins were robbed of a chance to contend when their No. 21 Hyundai developed an unusual fueling issue.  Basically, their car would not take on fuel.  The BHA team took the No. 21 behind the wall to try to repair the issue.  They were successful, but ended up 33 laps down as a result.

Pit strategy and the cautions resulted in a situation in which only three cars in class were on the lead lap at the end.  Gabby Chaves in the No. 33 ended up opening up an 18-second lead over teammate Parker Chase.  LA Honda World Racing’s Mat Pombo was further back in third.

Like in Grand Sport, the TCR teams had fuel come into play.  Prior to the race weekend, new Balance of Performance rules saw the Hyundai Veloster N TCR lose 10 liters of fuel capacity to bring it down to a series-low 64 liters (16.907 gallons, tied with the Mercedes-AMG GT4).  Normally, running 55 minutes under green isn’t a problem for TCR cars, but the recent rule changes made it tough for the Hyundais.

Chaves’ lead was big enough in the closing laps that he was able to back off a little to save fuel.  That was more than enough to give Chaves and Norman the win.

The official margin of victory over Chase and Spencer Brockman was a full lap because Chaves was just in front of Liddell when he took the checkered flag.  Pombo and Mike LaMarra finished third in their Honda Civic Type-R TCR.  Teammates Ryan Eversley and Taylor Hagler finished two laps down in a season-best fourth, while Michael Lewis and Mason Filippi were three laps down in fifth.

The Stay Frosty Performance Coolants 240 will premiere on television in highlighted form on Sept. 15 at 5 p.m. ET on NBCSN.  Michelin Pilot Challenge teams will be off for the next two weeks before returning to action at Mid-Ohio Sports Car Course for a doubleheader weekend.  Race No. 1 will be Sept. 26 at 1:35 p.m.  The second race, which will replace the Lime Rock Park 120, will be Sept. 27 at 10:35 a.m.