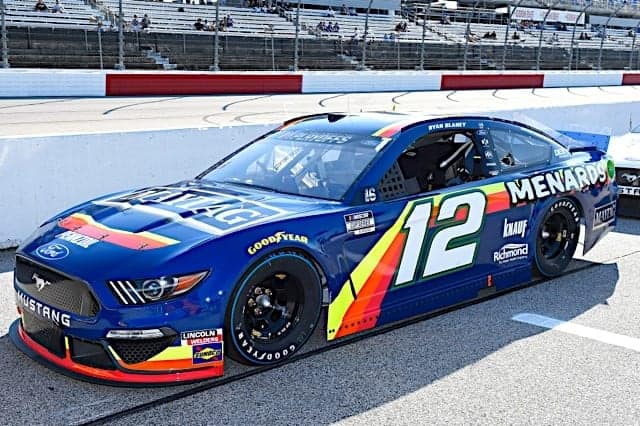 Ryan Blaney will start Sunday night’s (Sept. 6) Cook Out Southern 500 at Darlington Raceway from the rear of the field. Blaney was penalized during pre-race inspection for an improperly mounted ballast on the No. 12 car.

The penalty, which forces Blaney to surrender his seventh-place starting position, also results in the ejection of crew chief Todd Gordon. Blaney will lose 10 driver points while the team will lose 10 owner points, dropping him 54 points behind leader Kevin Harvick.

In a statement, Team Penske indicated that that a five-pound bag of lead used at the shop to simulate fluid weight was left in the car when it was loaded into the transporter. That bag was discovered by NASCAR officials during inspection. With Gordon forced to leave the premises, Travis Geisler, Team Penske’s competition director, has been tapped to sub for Gordon as Blaney’s crew chief.

As a result, Blaney will begin the NASCAR Cup Series playoffs in a tie for 13th in points after being in seventh prior to the penalty. Only the top 12 drivers in points will advance to the next round.

In Blaney’s four NASCAR Cup Series wins, his worst starting position is 12th, that coming earlier this year at Talladega Superspeedway.  500 miles at Darlington is a long race, but track position remains crucial at an oval where passing is difficult. Blaney will also potentially miss out on stage bonus points.

To make matters worse, Darlington is not one of Blaney’s better tracks. In fact, it’s his sixth-worst on the circuit with a career average finish of 19.9. Blaney has never finished in the top 10 there and, in seven career starts, his best finish is 13th (twice). The most recent of those 13th-place results was in last year’s Southern 500.

The Cook Out Southern 500 is scheduled for 6 p.m. on NBCSN. Coverage will begin with NASCAR America at 5 p.m.

Does anybody (chief mechanic) look at these cars at the shop? Or is it “not my job” attitude?