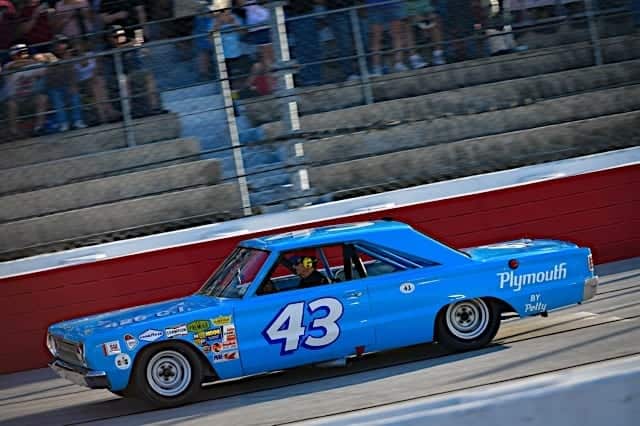 The list of drivers who have dominated at Darlington Raceway reads like a NASCAR honor roll.  David Pearson holds the record for most wins in NASCAR’s top division there with 10 victories.  After Pearson’s run ended, Dale Earnhardt took over and nearly equaled the Silver Fox’s feat by claiming nine wins.  Other NASCAR Hall of Famers like Jeff Gordon, Cale Yarborough, Bobby Allison and Darrell Waltrip took plenty of trophies from the Lady in Black.  Success at Darlington was a major factor in all of those drivers becoming legends.

But there is a notable name missing from the list above: Petty.  In a driving career that spanned over 30 years, Richard Petty won seven championships and 200 races at NASCAR’s highest level, both all-time records.  Whenever discussions of the sport’s greatest driver pop up, Petty’s name is sure to be included.  It’s often right at the top of fans’ greatest driver lists.  But unlike many of his peers, Darlington wins were not a staple of Petty’s career.  He reached legendary status not because of his accomplishments at Darlington, but perhaps in spite of them.

In fact, the Track Too Tough To Tame was never a favorite among any of the Petty family members who raced there.  Richard’s father, Lee, enjoyed a decorated NASCAR career but never won a race at Darlington.  Kyle, Richard’s son and Lee’s grandson, never quite figured out the track either. In 51 Cup starts, he never so much sniffed a top-five finish.

It’s a really odd bit of NASCAR history, considering that the Pettys as a family have so much in common with Darlington the racetrack.  Both have been around since the early days of stock car racing.  They were also both instrumental in helping NASCAR grow beyond its roots into a sport enjoyed all over the United States and even the world.  The Pettys and Darlington even went through some similar growing pains in the 21st Century, fighting to hold a place of prominence in a new NASCAR that seemed, at times, destined to leave them both behind.  Each have survived, continuing to represent the sport well.  Yet the success of the Pettys and the mystique of Darlington have rarely been directly dependent on each other.

To be fair, Richard Petty was not bad at Darlington.  In 65 Cup Series starts there, he earned 34 top 10s.  He also won three times, including the 1967 Southern 500.  Ask guys like Tony Stewart and Rusty Wallace how much they would have loved to win even one Cup Series race at the Lady In Black, let alone three.  Not every great driver reached their day in the sun on this 1.366-mile oval, and Petty at least checked off that box.

The trouble is that when you compare Petty’s Darlington stats to other tracks where he raced at about as often, you’ll usually find a lot more wins elsewhere.  Consider the table below, which compares Petty’s wins at Darlington versus selected longtime NASCAR tracks.

In terms of wins, Petty was at his best at tracks like Martinsville Speedway and North Wilkesboro Speedway, where he averaged one victory every four or five races.  Darlington, on the other hand, is near the bottom of this list, with only Talladega Superspeedway having a lower winning percentage.  The King did fine job battling at the Track Too Tough To Tame; his numbers there just look worse because of the high standard of dominance he set at other tracks.

In fact, Petty’s arguably best-known Darlington moment isn’t one of his wins.  It is the terrible crash he suffered during the 400-mile race in 1970.  On lap 175, Petty’s Plymouth broke loose off turn 4, spun out and slammed the inside wall.  This incident caused the No. 43 to turn over and barrel roll several times down the frontstretch.  The car eventually landed on its roof with Petty’s head and shoulders hanging out the window.  Thankfully, he suffered just a dislocated shoulder, only enough to keep him out of the driver’s seat for about a month.

Petty, of course, went on to race for many more years. But the Darlington accident would stand as one of the worst of his whole career, as bad or worse than the 1988 Daytona 500.

Suffice it to say that the Lady in Black was not kind to Lee Petty, either.  In 13 starts at Darlington, Lee had only one top-five finish and four top 10s.  While he may be best remembered today for his victory in the first Daytona 500 in 1959, Lee always felt more at home on the short tracks that made up the bulk of NASCAR’s schedule in the 1950s.  Of his 54 wins in NASCAR’s top division, only four of them came at tracks one mile or longer.

Kyle Petty would take on Darlington many more times than Lee did, making those aforementioned 51 Cup Series starts.  But his best result there would be a sixth-place finish in the 1991 spring Darlington race.  It was one of only five top 10s Kyle ever earned at Darlington.  Granted, he did not win as much in the Cup Series as Lee or Richard, but Kyle’s wins often came on demanding tracks that required steady, mistake-free performances to reach victory lane.  Winning at Darlington takes just that, and yet Kyle never even came close.

Like his father, Kyle’s best-known Darlington moment stems from a crash.  But it’s not Kyle’s accident itself at the Lady In Black in 1995 that’s memorable.  It is what he said afterward.

“I think they ought to fill this place up with water to the outside retaining wall, dump bass in it and have pro bass tournaments in it and sell seats in them grandstands right there,” Kyle exclaimed.  “As bad as this place is, you could stock a million fish in there and nobody would catch one.”

Kyle’s retirement brought an end to the Petty family’s battles with Darlington.  Adam Petty only made a handful of starts there in NASCAR’s second-tier series before his tragic death in 2000.  Richard’s three wins there in the 1960s remain the only ones at Darlington by a member of the Petty family.  Even Petty Enterprises as an organization only scored one more victory at Darlington with Buddy Baker in 1971.

It’s amazing that with all the success they enjoyed competing in NASCAR, the Pettys never quite figured out the Track Too Tough To Tame.  Perhaps their struggles are the best example of just how difficult Darlington really is.

Bryant…a question on stats…you say Richard had 74 starts at Daytona…opened 1959…Richard running ‘full’ schedule…in other words…he ran alot of races…back then…there would be points paying races in other parts of country…that some simply compete in…anyway…he ran Darlington every year afterward …with the exception of the mopar nascar boycott in 65( I didnt check for whether he returned for both races at Darlington…but I think he was bak for labor day race)…but he ran all races at both tracks in all the years of his career… so my question is: what are the nine additional starts at Daytona? Qualifying races occurred evry year from the 60s…that’s not added into start totals…just wondering, thanks, Greg Minter….PS:
Although Richard didnt pile up wins there….he certainly was competitive for the wins into late 70s, and similar to Earnhardt in the daytona 500, something always seemed to happen, and he would lose the race
Great article!!